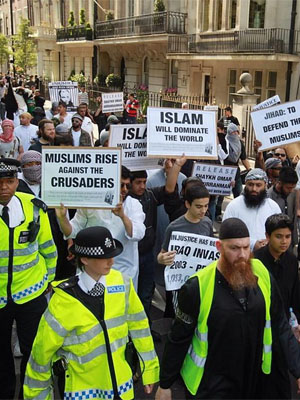 In the UK, the Counter Terrorism Command (CTC) are trying to build up a narrative of how the â€œfar-rightâ€ are terrorists just like those in the Muslim community. I became ensnared in this effort because a man I never met liked a letter I wrote and posted on Facebook.

There is a good reason I know nothing about Anders Breivik, the man who blew up a government building and shot 76 teenage Marxists in Norway. As part of its agenda to invent home-grown “right wing terrorism,” the CTC are trying to fit me up as being an associate of Breivik, whom I’ve never met.

Breivik did like my letter. This was a message I emailed and posted on Facebook about the secret deals between PM Ted Heath and French PM Georges Pompidou. The evidence I cited was obtained by Mrs. Thatcher in a Freedom of Information request and is available to the public on the website of The Margaret Thatcher Foundation.

Initially the Counter Terrorism Officers pursued me like they were hunting an animal and trying to run it into the ground. They were acting on the orders of the Senior Investigating Office. I agreed to co-operate with the officers; I have nothing to hide. However, after the interrogators attempted to twist my statements to implicate me, and demanded I agree with the new twisted versions, I refused to be interviewed further.

I filed a complaint with the Professional Standards Unit of SO15, the home of the Counter Terrorism Command. They carried out an “investigation” that consisted only of asking their colleagues for their views. They never talked to either of my two solicitors who would have borne out my complaint.

As of recently, I have received the results of the investigation led by Police Sergeant Tracey Wignall, who has â€œresponsibility for dealing with complaints and community issues arising from the actions of Counter Terrorism Officers.” The result of her investigation is a whitewash of actual events.

She contradicts herself throughout. She first quotes me writing that : â€œ(I) believe the alleged link to be an outrageous lie.” Later she libels me by writing: â€You also gave brief details of your connection with the individual named in the inquiry.â€ The letter serves as a justification for the results they wanted to find, not what they actually found.

I responded: â€œI have no connection with the individual named in the enquiry (Brevik) and I demand the Metropolitan Police cease this libel against me. The fact that I have no connections with him was clear during the interview I recently had with two different Counter Terrorism Officers at the office of my solicitors and the notes my solicitor took will bear that out.”

“D.C. Gatter claimed he had arranged two meetings with me, but he had agreed only to contact me through my solicitor, so that falsehood can easily be disproved. I repeat: he did not arrange a direct meeting with me. If this were true the investigating officer, D.C. Gatter, would have arranged an interview through my solicitor. She confirms that he did not contact her about these imaginary arrangements.

The police don’t want to contact my solicitors because then the whitewash will fall apart. D.C. Gatter was evasive whenever lawyers were present. He refused to tell my first solicitor his collar number, what station he works from and what he wanted; he told my second solicitor that he and his superior were thinking of arresting me â€œas a suspect under the Terrorism Act.â€

Wignall is so afraid my lawyers will tell the truth that she has never asked them for their version of what happened. She claims my first solicitors could not contact me. Of course they could and did. After conversing with D.C. Gatter, my solicitor was so upset by Gatter’s aggressive attitude and advised me to â€œget on with my lifeâ€ so I went away for a week to take photographs for an article about conservation and the environment.

The accusation that I have links to Brevik is a deception that shows how desperate the Counter Terrorism Unit are. They badly want to build up a narrative that the â€œfar-rightâ€ are equally extreme and terrorists like the Muslim community.

There was no suggestion of this link when I was interviewed by the other police officers in the presence of my solicitor. These two officers were exceptionally courteous and professional. If their colleagues had behaved similarly, there would have been no need for me to warn other innocent people what The Counter Terrorism Unit’s superior officers are attempting.

There are 390 convicted criminals serving in The Metropolitan Police. There are also at least 8 members of al-Qaeda serving in the Met as colleagues of these Counter Terrorism Officers. The police hope to cover up for them and put innocent people in the frame. It also shows the pro-Muslim and anti-Jewish, anti-Israeli and anti-English attitude of the Counter Terrorism Unit.

The Intelligence Paradox: Why the Intelligent Choice Isn’t Always the Smart One by Satoshi Kanazawa | Reality