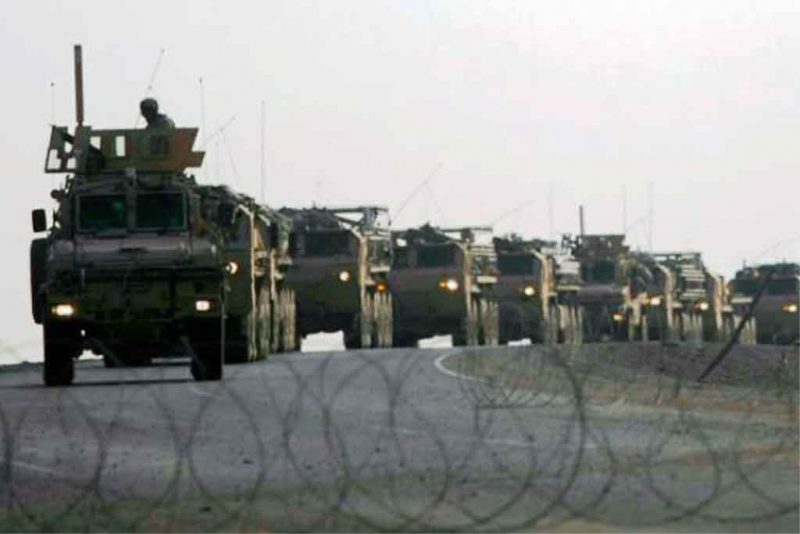 We are fortunate at Amerika to be able to present the second installation of the exciting dystopia saga, Crosses & Double-Crosses by Clayton Barnett. You can find your copy on the Jungle River store, but first, read this week’s segment of the story, “Family Contact.”

Sylvia, leaning over the folding table, was writing into the cheap notebook whose battery only lasted three hours, while sitting on her uncomfortable camp stool at their laager about forty-five miles north of the central part of Oklahoma City when she paused to look up at the convoy of three SUVs, led by an H2 with a machine gunner on top, which pulled off of the highway and into their camp.  All of the vehicles bore the XC decal of their organization.

The back left door of the second SUV swung open and Sylvia watched Kyle Stephens slowly get out and stretch.  Looking about, he waved to her and started over.  Few in ExComm smiled anymore.

“Miss Fernandez!” he said with his hand out.  “Good to see you again!  I hope this day finds you well!”

“I’m not on the Conveyor, so today, yes, I’m fine,” she replied grimly, using the nickname given to her brisk process to try and eliminate Citizen traitors.  “You here for the punitive expedition?”

“Of course, Deputy Director,” she agreed.  “I am sure, ah, that you and your men are finally happy to have a chance to swing into action?”

“It’s certainly better than flying a desk in Austin,” he said, his small smile fading, “but I had hoped we would be at peace a little longer.”

“ExComm will never be at peace,” she said in little more than a whisper.  “It’s not built that way.”

Pretending he didn’t hear her near-treason, Stephen pointed at the construction equipment steadily demolishing a complex of buildings about a mile away and looked a question to her.

“One of the major Masonic complexes in the Great Plains.  Orders from the top,” she said, turning to look in the same direction, and being nearly at the top themselves, they both understood what she meant, “is that they, like mosques, are to be given the ‘Carthago delenda est’ treatment:  not one brick left standing on another.”

“Mosques we all get,” the Deputy Director said, shading his eyes with his left hand, “Muslims were never Americans and they’ll obviously never be Texans.  But Masons?”

“I let it be known what was coming and got everyone out of the area before we started.  If they’re smart they will all keep their heads down and mouths shut.”  She turned back to him.

“So after you do… what needs doing in Kansas, what next?” She rolled her head as if stretching but he could tell she was looking around.  “I’ve heard talk about New Mexico…”

“That,” he said quickly – and why was she so confident to speak so freely? – “is nothing I’ve heard.  I and my men will assist with raising a regiment of local reservists around Tulsa, in case what’s left of the Federals get any stupid ideas about coming at us from that direction.”

“I would… if you and some of yours are available… appreciate any help you could give us in vetting new recruits, Miss Fernandez.”

He watched her brows draw together before she turned to look at a worn road atlas on her card table.  After a moment she looked back up to him.

“The choke point across the Mississippi for such an action is St. Louis,” she said with doubt in her eyes, “and I really don’t think the Black Muslim Brotherhood that controls that city – and Kansas City, as well – would want a brigade of mix-raced troops commanded by White Democratic Socialists from D.C. through their territory…”

She let go of the map.

“But to the point of your question:  so long as whatever you do in the next few weeks doesn’t send a wave of refugees rolling south, we and First Directorate should be done clearing central Oklahoma of trouble.” Her smile was anything but from happiness.  “Barring an order from the Director, give me a heads-up and we’ll meet you in Tulsa.”

She waved once back to him before sitting.  Unlike most of the other senior officers of ExComm, she didn’t have the urge to wash her hand after touching Stephens.  How did such a man end up caught up in something like this?  How did I?

She picked up the stylus and reviewed what she had written so far.

Thank you for complaining so much in your last letter about only being granted Resident status in the new Republic considering that without me you would most likely have been immediately dumped across one of the borders with only what you were wearing when they picked you up.  And by “they” I think you know who I mean.

I went to the wall for you, dear little sis; the Director had to ask the House for a special law to make me a Citizen.  That means he now owes several politicians a favor.  It was only after thanking him that I brought up you and your possible deportation.

“You want me to back to the State House and beg another favor?  I did what I did for you because I value your abilities.  If I start acceding to personal requests, where does it end, Miss Fernandez?”

We stared at one another for almost half a minute.  Then there was a brief interruption and it was just enough for him to agree for “Resident.”  Try looking around one of your overstuffed closets for your “grateful” hat, someday!

That last line was a little harsh.  I’ll delete it.  Sylvia looked up and stared first east then north, at the armored column going by road.  She heard the rumble of train after train on the tracks maybe five miles to the west.  Once the mobile force secures the outskirts of Wichita and the units on the trains come off, it will be another bloodbath.

From their stronghold in St. Louis, the Black Muslims took what was left of the Kansas Cities and Topeka, just as what was left of civil government in Oklahoma City asked Texas for help – defense and electric power – from the newly declared Texan Republic.  With victory fever and poor impulse control, the Black Muslims sent telegrams for “You honkies to stay outta our bidness!”  Spellcheck, it seemed, was not a button they used often.

Sylvia sighed.  That had only been a matter of mirth in Austin until the second message came:  “We gonna come south and liberate the Brothers and Sisters in you’s cities!”  As the Director calmly pointed out to the Cabinet of the Interim President, that was a declaration of war.

“Especially,” he had continued softly, “once, when – not if – they find out that their Brothers and Sisters have been evacuated.”

And that’s why Wichita is going to be razed; an innocent city caught between two powerful enemies.  And that’s also why, she thought, what Stephens was really getting at about Tulsa; the Federals would never use that path, but the Black Muslims might.

Someday, you may want to thank those two who brought about that pause in which you were allowed to stay:  the Director’s secretary popped his head in at that moment to say that Barrett’s wife and daughter had finally arrived from Japan, having been marooned there, I heard, for years because of the Breakup.  He –

Sylvia paused.  You never know who is reading these…

He seemed to take good news just as he does everything else:  with detachment.  He stood and said “Resident” to me.  It was obvious my audience was over.  There were several others in the organization I had to see, so it was a good hour and a half before I was back in the central courtyard.  Not used to hearing female voices at HQ, I turned around.  A middle-aged woman in what I’d call in Texas business casual but which by Manhattan standards was a little slovenly.  She was just putting sunglasses on but her face looked some central European mix.  The late-teen girl next to her was obviously ethnic Chinese; the little smile on her face was very nervous.  That’s right little sis:  I was looking right at the family of the most powerful man in our world.  I did what any thinking person would do:  I got out of there quick.  Oh?  Did you think I was going to walk over and introduce myself?  You wouldn’t last a day in ExComm!  “Hi!  I’m Roberta!  I’m working to kill tens of thousands!”

From your last letter, I know you are getting close to finishing your BS in Pre-Law (and when and how did they actually make that a degree!) at Texas A&M.  We both heard that UT was – and remains – closed, but I was surprised to hear that the rot was so deep into what I thought was a quasi-military school.  Agent Rupert – who, as you now know played a role in using his contacts to get you in there – was very correct:  what we knew about Texas from TV was completely wrong.  You might not know this, but it was part of Third Directorate that helped, er, convince the unwanted faculty to quit or retire:  all the “Studies” departments gone.  Only the tech fields remaining.  What was that, little sis?  Oh, sure:  you’re welcome!

With our southern and southeastern borders secure at last, I wonder more and more –

Sylvia abruptly stopped, realizing what she was about to write would get her and Roberta onto the Conveyor.  After another swipe back and she tapped Save and leaned back in her camp stool.

“What comes next, Clive?” she said as softly as she could, daring to use the Director’s name.

So pay attention to your studies and get top marks!  Once the rest of America is back on its feet we are all going to need good lawyers to bring the rule of law back as soon as we can!

I love you and miss you, Roberta.  Please take care of yourself.

And don’t be stupid.

With a Save, To, and BCC (to Barrett; the responsibilities of their neo-feudal system in ExComm ran both ways), Sylvia tapped Send just as one of her men came up to her table carrying a flimsy paper.  She used to copy it to one more but had been told by him that he was reading her mail already.  You are a jerk, Thaad.