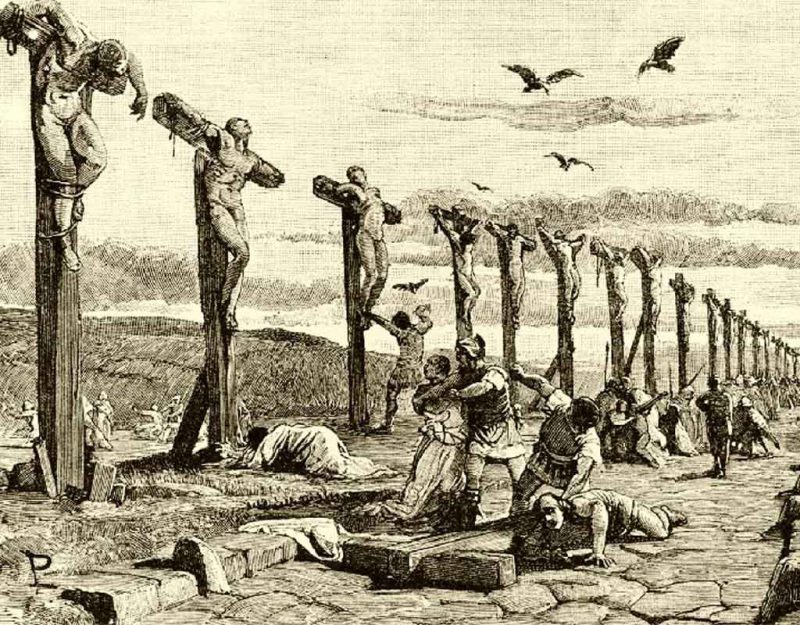 We are fortunate at Amerika to be able to present the second installation of the exciting dystopia saga, Crosses & Double-Crosses by Clayton Barnett. You can find your copy on the Jungle River store, but first, read this week’s segment of the story, “An Offer.”

Down two flights of stairs, he indicated the door at his left, beside a single armed man.  No brass nameplate; no ostentation.

“Do go on in,” Stephens said.  “I’ll be back in my office in case your sister needs more food!  They’ll let me know when you’re finished.”

“Thank you, Mister Stephens,” she replied, recalling her manners, “for everything so far.  But I’ve one last question, if I may?”

“Of course,” he replied.

“I’ve seen very few women here; given what you’ve said about the ongoing emergency in Texas I understand why that may be,” she began.  “But I have also noted that every single person I’ve seen in this building is White.  Is – ”

“The short answer to your question is no, Miss Fernandez,” he answered over her.  “ExComm has units that are Black, Hispanic, some mixed… they just do not operate together.”

“And why is that?” she bridled at such open racism.

“Ask the Director, it’s his policy.  Good luck with your interview.”

With almost all of the positive things she had thought about this man suddenly pushed from her mind, Sylvia opened the door and went in.

She discovered her first example of a traditional office:  rather than the Director she beheld an obvious secretary.  The man was typing on an electric typewriter and only looked up for a moment.

“You’re expected,” he said with a toss of his head to the left, still typing, “go on in.”

Sylvia entered a room that was a little less warm and a little darker.  From the humidity and smell, she recognized a swamp cooler rather than a regular air conditioner.  The blinds on the two windows opposite her were down and closed.  Just before them, a man sat behind an unremarkable old wooden desk.  More stacks of files occupied the space to his left but on his right, she beheld the first laptop she had seen in the building.

I guess rank has some privileges, she thought.

He waved at the two chairs opposite his desk.  She chose to sit in the one on her right.

Not much to look at, Sylvia thought, using her lawyer’s eye to pick up what details she could.  The same semi-uniform that most here are wearing, with his thin leather coat hung on a peg to the left.  No badge or indication of rank… does everyone just recognize him?  He seems mostly Celtic with thinning sandy blonde hair.  Glasses sat atop a nose that was just a little too pointy.  From the pink splotches on his otherwise pale face, I bet this one drinks… a lot.

“I’m Sylvia Fernandez, attorney,” she began, sitting just on the edge of the chair.  “You asked to see me, Mister Barrett?”

“Indeed, Miss Fernandez,” he replied in a deep, measured voice.  “As the man ultimately responsible for law and order in Texas, I’d like to apologize for what happened to you and your sister at the DFW Airport.”

“That’s not necessary, but thank you,” she tried to match his careful tone with hers.  “Your Agent Rupert has been most helpful!”

“I’ll note that, thank you,” he replied.  “You may be pleased to know that the perpetrators of that attack have been apprehended.”

“Very good!  Will you need us to testify at their trial?” she asked.

His blink was somehow more disconcerting than an outburst.

“All of Texas is under martial law right now.  They have already been shot, Miss Fernandez.”

“I see.” She collected herself.  “Your Mister Stephens said something about Third Directorate…?”

“The Third Chief Directorate, just recently formed as you may surmise,” he began, leaning back in his chair, “is to be the defense of the Extraordinary Commission.  The First was formed and went into action very quickly, to catch our enemies off guard – ”

“The invasion across our southern border and the insurrections in the larger cities,” he continued, not at all put out by her question.  “To prevent any betrayals in the field, units are organized along ethnic lines and deployed accordingly:  Whites and Blacks to the south and Whites and Browns against the inner cities.”

“How diverse of you,” Sylvia said with a wry smile.  She had seen with her own eyes in New York City and the Philippines enough to understand the lie peddled by the last two generations about racial harmony.

“’Diversity plus proximity equals war’ is axiomatic in ExComm, Miss Fernandez.  And I am pleased to hear you already know that.”

“The Second Chief Directorate is much smaller, serving as an intelligence and communications hub for National Guard units and any larger paramilitary forces,” he continued somewhat ambiguously, “on all of our frontiers except the south.  To date, they have had little to do in comparison to the First, but if we see the need to project power beyond our borders, I’ll have them on the hop.”

And why, she wondered, would they need to pass outside of their borders?  After independence do they have regional aims?

“And the Third?” she prompted.

“Sooner or later, if not already,” he said with a nod, “we will recruit people whose intent is not to protect Texas but to destroy it and ExComm.  We need people able to review personnel files, conduct interviews, and expedite the removal of traitors from our midst.”

He leaned forward and clasped his hands together on his desk.

“Your background and experience would make you an ideal fit to be that Deputy Director’s number one, Miss Fernandez,” he said looking straight at her.  “For a start.  If you thrive there I may have some additional… delicate assignments for you, as well.”

Sylvia kept her breathing regular and made sure she held his eyes as she considered the enormous opportunity just offered her.  A new position in a new agency in what is shaping up to be a new country!  I could… I could end up anywhere!

They both were aware of the sudden use of his title.

“As many as you like, Miss Fernandez,” he agreed with a small toss of his right hand.

“As a lawyer, I stand for the Law.  When you just now said ‘expedite the removal of traitors’ will that be summary execution, such as what happened to those from that attack at the airport?”

“Citizens and legal residents will have the protection of the law,” he said with a nod.  “But we have little time and our actions must continue to be as sudden as possible.  So yes: a trial before a judge but no appeal.  Not until much… later.”

That sounded a little ominous but she pressed on.

“Minor treason is branding and expulsion; major traitors will be shot immediately.”

So much for a future appeal…

“That is for citizens and legal residents, you said, what about those who are not?” she followed up.

“An excellent question,” he said turning to pull a couple of 8” x 10” photos from a drawer of his desk.  “And one that we have begun answering just last month.”

He tossed them to her.  Before she reached for them, he spoke again.

“We tried building a physical wall along our southern border.  As the Romans and Chinese discovered, a wall is only as good as the men defending it.” He looked at the photos.  “It is my policy to attack the minds of our enemies, not their bodies.”

Confused by his words she picked the pictures up.  The first was taken from the air.  The caption said ‘Mouth of the Rio Grande.’  Following the river inland was a line of what looked like telegraph poles.  Some new communications system?

She looked at the next picture and caught her breath.  This was taken from ground level.  Every one hundred feet was another crossed pole.  There was a person, mostly men but she could see at least two women, naked and nailed to the crosses.

“Twelve hundred and fifty miles, from the Gulf to El Paso,” she became aware he was talking.  “That is six million, six hundred thousand feet.  With one criminal every hundred feet.”

“For generations, the US in general and Texas, in particular, has been made to bear the brunt of immigration policies deliberately – deliberately, mind you!” – as it was the first time he spoke with emotion it behooved her to pay attention, “created to destroy America.  They should be congratulated… look around:  the US is done for.  It worked.”

He pointed to the pictures still in her hands.

“I not only will reverse that but make sure it never happens again!  Your family, your New York family, Miss Fernandez is dead because of the betrayal of human biology and the Law!  If you really do stand for the law, as you so claim, then help me.  Help me set this little corner of Western Civilization back onto its feet!”

No one moved for at least a minute.  There was a scratch at the door when opened a fraction.

“Your appointment at the State House, Director,” the secretary said before closing it.

“Do you need some time, Miss Fernandez?”

“Not at all, Director Barrett,” she stood and extended her right hand.  “I’d be pleased to accept your offer.”

He stood as well, returning her clasp.