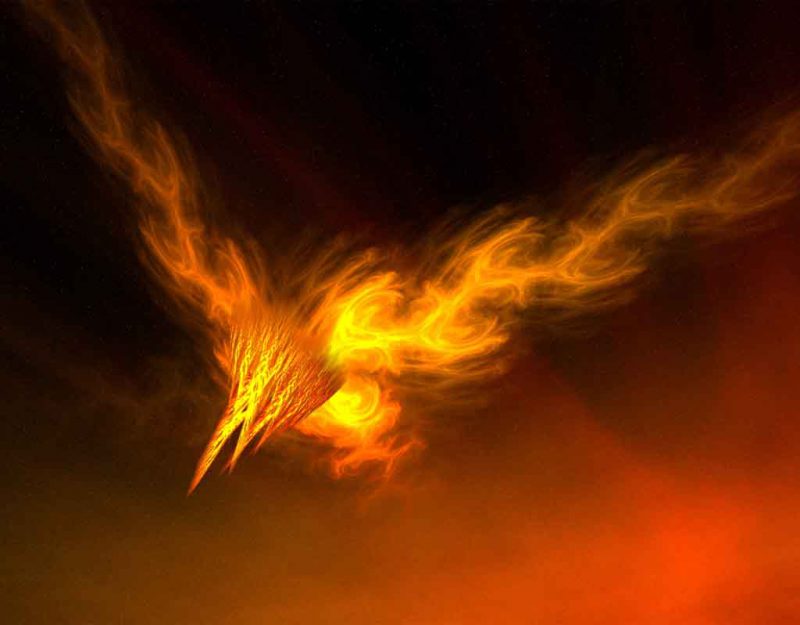 We are fortunate at Amerika to be able to present the second installation of the exciting dystopia saga, Crosses & Double-Crosses by Clayton Barnett. You can find your copy on the Jungle River store, but first, read this week’s segment of the story, “Phoenix.”

From the couch of the port side of the small Gulfstream G280 Sylvia looked over her shoulder.  Far below the bleak west Texas landscape slid by at five hundred miles an hour.  Their trip should take just a little more than seventy minutes.  Given that, she had done what work she could for the first thirty minutes to allow time for a nap before they landed.  While the couch was hers, her two security officers and her newly-promoted Field Secretary, Kharachan, sat in chairs about the cabin.

So much like a wasteland down there, she thought, still looking.  There are a few patches of green against the brown, and some flashes of silver and gray where buildings are; most likely oil or fracking rigs.  Not at all like that lifeless landscape where I met that odd woman, Ninon, in that odd dream.

But was it a dream?  When that hyper loligoth suddenly appeared and “fixed” my memories… it seemed as real as this does.  She ran her hand down the cool fake leather of the couch in the jet.  Sylvia had been surprised at the follow-up to her dispatch to El Paso:  the Director allowed her use of one of ExComm’s few aircraft.  Some quick research yielded that Los Alamos had a small airstrip had her choose the smallest plane for her mission.

Still wanting her nap, she also wanted to have a quick word with someone.  She clicked on the three-gear icon.  They rotated only a moment before a window opened:  Thaad unavailable.  That had only happened once before; the gifted hacker with a keen political sense was usually always there.  Ah, well.

She closed the laptop and set it onto the small table at her right.  She slid down onto the couch and closed her eyes.

There was a bump of turbulence great enough to lift her just into the air.  It became a matter of concern when she didn’t return to the couch. Sylvia opened her eyes.  While having the impression of motion, it was as if she was flying through clouds… just not in an airplane.

Another dream?  She broke through the clouds to see the plain brown landscape far below.  It was real enough that she involuntarily flinched in panic.  At that, she felt something tighten around her waist.  With a look, she saw what seemed orange and red ropes of fire, about an inch thick.

You are safe, little girl.  Ninon’s voice, but inside her mind.  Now Sylvia looked up and back.

A phoenix:  a bird made of fire as large of the jet she was – hopefully – still asleep in.  The mythical beast cocked its head to focus one of its jet-black eyes onto what it held.

I recall, Ninon, she thought back to it, you said something to the effect that you alone of your family take to the sky.  This is one of those times?

The cocked head returned forward as they dove at the ground.  Sylvia began to grow concerned.  If I die in this dream…

Ninon pulled up just yards shy of the rocky ground.  With each powerful beat of her wings, they were climbing higher and higher.

You are more a stone than a feather, little girl, Sylvia heard.  Very soon you are going to have to move outside of your head:  first in your thoughts, then for good.

If I had a client who talked to me this way, I’d drop them! Sylvia thought to herself.

When that happens, little one, be strong in your step.

They were back onto the clouds but still climbing.  It was getting cold, fast.

“Just what are you telling me – ” Sylvia began aloud.

They broke through the clouds.  Sylvia could see the curvature of the world below her.  Not only was she freezing but there was suddenly no air.  She began to struggle.

Live the dream, little one:  yours and mine.  Euphoria!

Someone was shaking her.  She opened her eyes to her driver, Richmond.

“You were making a choking sound, Miss!  And shaking, bad!” he said.

“Just… one of those dreams,” she managed, still taking in great mouthfuls of air.  Behind Richmond, Kharachan was looking at her yet had remained in his chair.

“How… how soon ‘till we land?” she asked, trying to get her mind working again.

“About five minutes, Deputy Director,” her driver said, pulling a small blanket down from a tiny overhead bin.  She thanked him with her eyes as she pulled it around her shoulders.

“We’re close enough to the river that you can see the Director’s handiwork,” her Field Secretary lisped, looking past her out the south-facing windows.

Sylvia kept her face a mask and didn’t bother to look out the windows.  Instead, she pulled a file from under her laptop and flipped it open.  She didn’t notice Kharachan’s rat-like smile before he looked away.

I know what’s down there, you slimy bastard, she thought, her eyes not seeing the papers before her.  Just south of the line of the border wall that had been built a few years ago was a line of what looked like power poles:  one every hundred feet.  Enough time had passed in this desert climate that most of their original occupants were nothing more than bones.  Bones of the crucified.

There was a ding! for the passengers to don their seatbelts for landing.