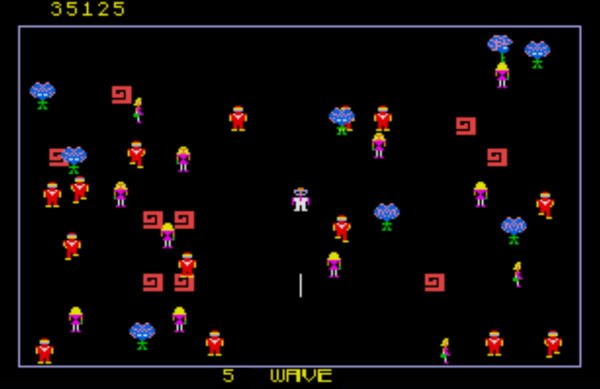 So you’re out socializing, and some friends are playing vids, and you end up grabbing a controller and playing for awhile. Perhaps you have a long walk home, and think it over, much like how in sleep we try to make sense of our days. At that point, some truths about videogames become obvious.

First, these are the perfect tool of industrial society because, like our jobs, they emphasize memorization of task and brute-force “creative” approaches that are essentially a variation of known acceptable moves. When you are on a new level, you try versions of the same strategy that worked on other levels, or attempt new versions of the tactics indicated by what the controller buttons do. For example, if one button is “jump,” you eventually try some jumping-based solution to any problem, even if there are also buttons for “shoot” and “defecate.”

These games are quite moral in their rules, however, in that they create scenarios where absolute judgments apply. Guys on your team never go bad, and guys on the other team never turn out to be genius writers or artists or doctors that you slaughtered in the prime of life. They’re faceless droids, and you kill or be killed according to their position. This is fairly realistic, except that the positions are so fixed it would seem as if God himself administrates each game.

Videogames also batter into your brain the idea of a finite universe where there are only a certain number of things one can do, and outside of that, there is no effective strategy. War games are a world of unending war, with no resolution. Sports games show only the world of sports. Everything in those worlds serves that topic, so it is sometimes like existing in a card catalog of isolated specialties that seem more like functions than play.

The user is encouraged to hard-wire his or her brain for immediate response to various stimuli, which gives rise to the “when you have a hammer, everything’s a nail” syndrome; anything that pops into the line of fire has to be blasted before your thought is even complete or you’re at risk. This forces a minimal set of rules for understanding the world onto the mind, to the point where one sees reality as a subset of the options defined by the game.

What makes these weird worlds so appealing is the same thing that makes the internet addictive, or religion or politics compelling: if life is divided between mind (abstract) and body (tangible), this is a world of the former absolutely regulating the latter. You can win a world war in ten minutes, or bring your favorite team to the superbowl. There’s a sense of — well, accomplishment probably isn’t the word – but a “setting right” and a definition of self in what one would do (if it was real). This is why the best games are sometimes those that do not try too hard to be fully realistic. It is symbolic warfare.

One disturbing thought that occurred to this user: “If I spent even an hour a day at this, I would be as good as these other people.” Sickeningly, it is not a specialized skill, except perhaps those tournament-winners out there; videogames are designed for the average person to get good at them through repetitive practice. Devote your hours to these games, and you will wire your brain fo them, and soon be quite good. It’s amazing to see a player go from novice to expert in a matter of weeks, until you realize the degree to which time has been dedicated.

In this, videogames are a lot like commerce, because as in the video-world nothing in the money-world is that conceptually difficult, but all of it rewards the amount of hours put into it, usually (as in videogames) while seated in front of a glowing machine or equivalent, like a pile of receipts or documents. It rewards time spent away from reality, and willingness to dedicate one’s life to a task that may be entirely fantasy. It rewards no moral contemplation of what is right; it rewards only playing the game.

The disturbing facet of playing the game is that, while the game is not real, it has real-world effects. It is a way to socialize, or to stave off boredom; it is an “activity” for modern people to discuss at work or in the gym or on the set of bondage porno films. Much like our jobs, it is something we invented to fill lives that we fear might be empty (regardless of the reality, which probably varies between individuals). And, much like what occurs when playing a videogame, while working late watching evening descend on a beautiful day, you might feel you missed something.