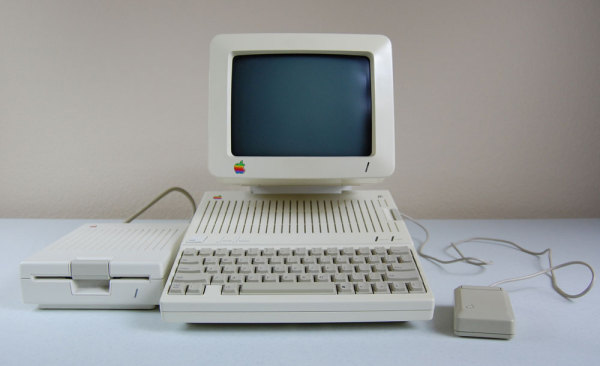 In a society driven by commerce, we are expected to distinguish ourselves by what products we buy. Some products, while claiming to be the antithesis of this plastic culture, in fact enforce it by equating themselves with an identity. Clearly, the classic example is a car, but there’s a more mundane example closer to home: a Macintosh computer.

For over twenty years, Apple Computer has marketed its machines as “superior” with questionable data to support that assertion. They have never attempted to resolve this disparity, as all that is required of them is that they convince the roughly one in twenty computer users out there that Macintosh is a brand overlooked by a global conspiracy toward boredom. The user, usually an egodramatic sort, finds this type of thinking fits into her worldview: the great Right-wing conspiracy in Washington denies the unprivileged, the boring corporate machine denies individuality, most people never see the simple profundity of movies like “Save the Last Dance,” and so on. This person has succumbed to an intricate form of pity in which, by pitying themselves, they are required to think that the world denies all quality, and therefore, they look for “quality” in the minority options of any decision-making process.

Back when Apple made machines based around Western Design, Inc’s 6502 processors, they portrayed IBM who, if you can believe it, was the leading computer maker of that time, as the big bag guys in ugly suits who wanted you to have a boring, tedious experience. Never mind that IBM’s operating system could do many things Apple could not, and that their machines were faster and not that much more expensive (after a few years: substantially less expensive). Apple wanted to market their computers as “unique,” which was a way of avoiding direct competition with IBM.

When the Macintosh came out, Apple ran a series of “1984” ads that portrayed Mac users as the “freedom fighters” (gosh, sounds like something the Bush administration would say!) rebelling against the evil and stupid empire of Big Brother. The idea was that if you bought a machine with a visual interface, you would be fighting back against the tedium. Oddly, the fact was that the Mac was far more expensive than the other machines available at the time, and it was already round two of Apple’s attempts to make such a machine, having already failed with the $10,000 Lisa. Oh, and did we mention that GUIs – graphical user interfaces – were actually common at the time, having been invented by Xerox PARC almost ten years earlier. Does anyone remember GEOS for the 6502 machines? Or X windows? Yes, well.

Apple kept the propaganda machine churning, and they live by it to this day, selling machines that are three to four times the cost of equivalent PCs to a devoted userbase. Even more grotesque, these machines cannot be sanely upgraded (general upgrade price between computer lines: $1500 per two years) and thus result in giant mountains of landfill because unlike a PC, a five-year-old Macintosh is just about useless because all the software etc has been upgraded and is now inaccessible to it. These are $2,000 machines, mind you.

Currently, if you go to look at computers, you will see two major options: any number of PC clones, and a series of Apple machines that look better and have a much fancier interface. Thanks to technology borrowed from Steve Jobs’ other company, NeXT, which went bankrupt after a series of bad business decisions, the new Apple machines even have a decent underlying operating system, OS X. The only problem is that the interface does not match the machine, and therefore, like Macs for time immemorial, much of what you need to do is hidden behind cryptic layers of first visual and then textual interface.

Apple, of course, will tell you how much superior their machines are, from physical plant onward. This is nothing new. They insisted the 68000 processor delivered more power than an equivalent Pentium, but soon that was not true, and they switched to the Power PC, while claiming the same thing. Recently, they’ve switched to Intel, mainly because they cannot get the superior power they’ve been claiming for years out of the Power PC chip. Few have asked them, but it’s pretty obvious that Apple was lying for all those years of statistics that put them ahead of PCs. Even more, it’s obvious much of their propaganda had a dodgy origin, including their dubious claim that using Macs made users more efficient. When one looks carefully at any Apple statistics, one finds a reek of bad science: when testing equivalent machines, the Apple box uses custom software and installations, and the PC box uses the most blockhead generic installation and software possible. There is no pretense of fairness, but Apple doesn’t need it, because their company does not sell products based on their superiority, all rhetoric aside. They sell them as an identity.

If you buy an Apple, the ads claim, you have automatically (for ticket price $2,000) entered the small elite group who actually know What’s Up, and therefore buy the hidden superior product instead of the blockhead machines everyone else carries home. Even more, there’s a whole agenda associated with Apple. If you buy an Apple, you support “expressing yourself” and “personal freedom” and being artistic. Thanks to their ads, you may even be supporting your right to be stoned, or to be gay (this is the company that had the rainbow logo, remember?). It’s a wonderful, wonderful pluralistic world with Apple, mainly because when you buy an Apple, it’s all about you.

And this is what sells computers for them. Clearly their userbase does not care if they are superior; they want the identity. Most people are fine with PCs, because recent versions of Windows are quite solid and run on a range of hardware, giving one quite a few options. Further, most people don’t actually care how great the GUI on the machine is, because they only need it for a few functions – and most of what Apple adds to their GUI does not make those functions easier, it only makes them more obvious. It’s like increasing the font size on streetsigns and using very simple words. It’s the computer for those who fear computers. When they have something of reasonable quality, they claim the world of it, but they also do the same when their machines cannot even compete. How would one ever trust such a company?

The answer is that one doesn’t trust, but like a drug addict, one needs one’s ego fix. The modern citizen is without cultural context, or really anything they would be willing to die for, as far as beliefs go. They’ll vote for whatever makes them feel better about themselves, usually through the mechanism of generosity and pity. They’ll buy things that make them feel like they are somehow different than all the other people who bought the same product. Isn’t it wonderful, to think that because of a mathematically unique combination of bathroom and home furnishing products, you, too, are an “individual” like the rest! These people do not derive individuality, as once was done, from actions or creativity, but from the process of “different” arrangements of familiar objects. In that case, I know a sure way to be the most individual: be insane, because you’ll never use anything for its actual purpose!

Apple likes to tell you that they’re the alternative to Big Brother, but really, they are Big Brother. What the powers that be do is manipulate you into thinking you’re unique, worrying about pity, thinking about anything but reality; this lets them run the show behind the scenes while you’re distracted. Furthermore, they convince you that somewhere in this society there is some other group which is naturally given more than you, and thus in the cosmic balance of good ‘n’ evil, you are “owed” something by them and must take revenge upon them. This is the mentality of not only Apple Computers, but George Bush’s neocons, Marxists, corporate marketers, drug dealers and pedophiles everywhere. It is manipulative. You either stand against this, by looking critically at it and seeing what it actually is, or you join the mass revolt procession toward oblivion that currently grips our society. Apple is part of this deathmarch, and if your soul is so weak that you need something external to ratify your self-worth, they’ll gladly sell it to you with soothing words and endless distractions.