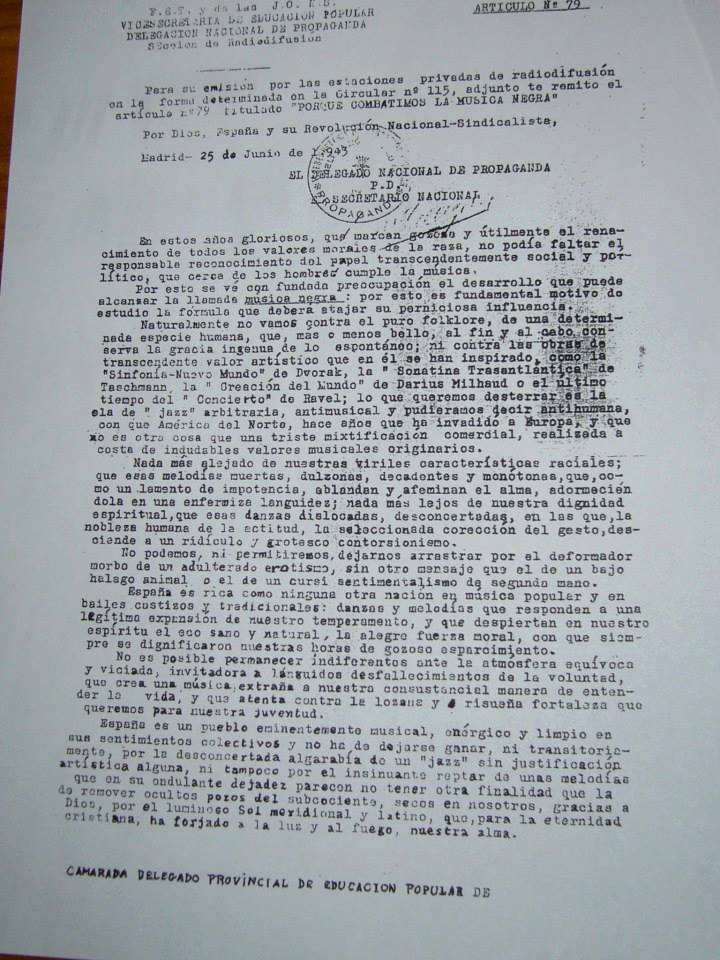 By God, Spain and its National-Sindicalist Revolution,
Madrid – 25 of June of 1943
Deputy of National Propaganda P.D. National.

During these glorious years that mark the rebirth of all of the moral values of the Spanish race, we cannot forget about the social and political transcendence role that music has.

We are righteously worried about the possible development of that which is called “Black Music”: it is of the uttermost importance that we study the formula that prevents its pernicious influence.

Naturally, we are not going against the pure folklore of a determined human species that, more or less beautiful, that conserves the ingenuous grace of the spontaneous, nor against the works of transcendent artistic value that have been inspired by it like the “Symphony of the New World” by Dvorak, the “Transatlantic Sonatina” of Teschman, the “Creation of a New World” by Darius Milhaud or the last tempo of the “Concert of the Ravel.” What we want to exile is the wave of arbitrary jazz which is anti-musical, and dare I say anti-human, with which North America has invaded Europe years ago and that is nothing other than a sad “commercial muttification,” made in detriment of the indubitable value of the original music.

Nothing further away from our masculine racial characteristics than those dead sugary decadent and monotonous melodies that soften and feminize our soul with their shouting of impotence, making it sleepy and give it a sick lameness. Nothing further away from our spiritual dignity than those dislocated dances, in which the human nobility and attitude, the selected correction of the gesture, descends to a ridiculous and grotesque contortionism.

We cannot and will not allow ourselves to be drawn by the deformed morbidity of an adulterated eroticism with no other tip than that of a low animal flatter or a corny secondhand sentimentalism.

Spain is rich like no other nation in popular music and in castizo and traditional dances and melodies that answer to a legitimate expression of our temperament that awakens in our spirit the natural and healthy echo, the cheerful moral form, with which our cheerful increase has always been portrayed.

It is not possible to remain indifferent before the atmosphere of lame, false and stuffed failure of the will, which creates a a weird music to our substantial way of understanding life and that attacks the healthy and vigor that we want for our youth.

Spaniards are an eminently musical people, energetic and clean in the collective sense and this people shall not let itself be overpowered, not even transitionally, by the nonsense sound of an artistically unjustified jazz. Nor by the insinuating reptile crawling of a melody that in its sinuous lameness seem to have no other goal than to remove subconscious pores already dry in us, thank God, by action of the Latin Sun, that, for Christian eternity, has forged with light and fire our soul.