In confrontation between Richard Dawkins against creationists, the leading atheist will pull out the sky hooks vs. sky cranes argument in order to convert more people against the idea of Gods. Given that most athiests are liberal, they are standing directly in the shadow of christianity. Neither science nor religion has any claim to absolute truth, each varies according to the characteristics of the genetics who uses it. 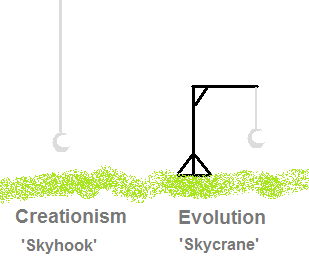 Dennett used the term “skyhook” to describe a source of design complexity that did not build on lower, simpler layers – in simple terms, a miracle.

In philosophical arguments concerning the reducibility (or otherwise) of the human mind, Dennett’s concept pokes fun at the idea of intelligent design emanating from on high, either originating from God, or providing its own grounds in an absurd, MÃ¼nchausen-like bootstrapping manner.

Dennett contrasts theories of complexity which require such miracles with those based on “cranes”, structures which permit the construction of entities of greater complexity but which are themselves founded solidly “on the ground” of physical science.

Dawkins on the gaps of science

There are however, problems with this argument. In a natural, earth localized evolution, evolution wins hands down because we can see the dirt we are standing on, yet in considering the universe in its entirety, sky hooks may actually be something beyond both local evolution and creation, into cosmic evolutionary creationism, growing in a void of dirt that we have an ignorant perception of.

A sky hook is only half of an argument, it it possible to come from somewhere beyond standard evolution, from exotic evolution over and beyond the ordinary realm of physicality – yet this is being obscured by religionists who do not know their own tradition, they are exoteric and are unable to decipher esoteric truths against literal scripture and so the argument becomes a ‘skyhook’. Sky cranes similarly yet strikingly oppositely, are evolved upwards in a natural selection but fail to realise then that they have the self-evolved apparatus from which to simulate ‘creation’ through domestication and cultivation (civilization).

The hook then, supposedly has no explanation, it comes from ignorance – the modern religion argument. The crane is a self evolved apparatus, and came from the Earth alone, the evolutionary argument. The stupid thing is, that if we place a progeny, a little crane next to the big crane, then logically, could it be that the sky hook is just a bigger crane? 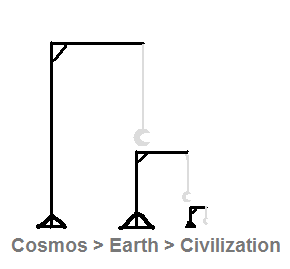 Each crane is a support niche allowing for further evolution in a specialized ecological niche, both are right in that they offer a niche for existence and both wrong in that they hate ancestry and progeny, as one tree ages, it spreads seeds – these then create new ‘skycranes’ in which it too will evolved to spread its own progeny, its own skyhook.

Tradition helps us see that ancestry is important to our heritage, progress likes to think we are all individual Gods, nothing is greater than our own perception and so any alternate explanations are ridiculed.

Scientists can get away with it because they focus on solid ground, it’s right in front of us. Religions fly away because they focus on the air and vacuum of space all around our idealized rock, they reach escape velocity, not allowing themselves to sink to the surface of finity. Two phases of reality, Earth and Air. 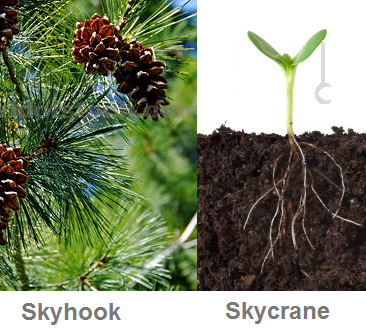 From the Air came that seed which dropped onto the Earth, and created a sapling, God was born anew, it will evolve and create progeny of its own. The tree must die – nothing lives for eternity, although it may seem; outside of our physicality is yet a higher physicality and that a physicality of something much larger than itself.

Science is a little sapling born from the civilized mind, it is not whole – it is localized and subjective, everything is – even our pesky experiments and theories would give different results in another cosmos where our laws are simply too ill constituted to survive and break down into singularities.

A tree grows into such a height, that the roots of our sapling cannot sense it directly – the tree roots are far deeper than ours, stretching a timeless immemorial into the dark soil beneath it, beyond sense yet within intuition. The sapling has an instinct to grow, and when you revere a God it is that God collectively within all life that wishes to grow into the heights, beyond mediocrity, beyond weakness – to rebirth greatness, to grow into the tree of life.

On Stoic Virtue | The price for ecocide