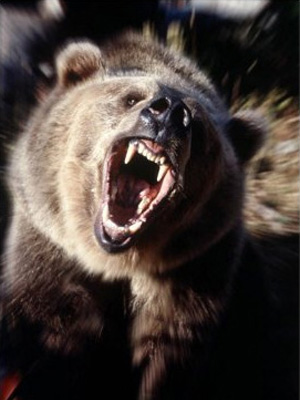 Reality.
A word we’ve all used.
We all know what it means, don’t we?
Um. No. We most certainly don’t!

A word about the picture:
Imagine that’s you, on the other end of that charging grizzly.
No weapons. Nowhere to go. No time to make a plan.
That’s Reality!
And so to workâ€¦

This essay is one I know I am not going to be able to do justice to, and so I write it with trepidation. Because it needs to be written ‘just-so’, and I know I can’t write it that way. But if I don’t write it, who will? So, taking that into account, please, bear with meâ€¦

It has come to my attention that everybody has a differing view of Reality. No two definitions are anything like the same. Most can not even begin to define it, yet all assume that they know what it is. This is a word that has everything in common with another very common word. No two people come up with the same definition, and most are unable to define it at all.

And how can this be? Words so common that everybody knows them, that fail, completely to communicate what is meant by them? Another is ‘Love’. There are more, but these words are about all I can cope with, for now.

Let me give you my own definitions of these things, to consider. See how they differ from your own, if indeed you have ever consciously defined these things. See if they make sense to youâ€¦

Love: Service to something that is not obviously yourself. Although it actually is.

God: That concept, created by men, to signify something so far beyond them, and their own capabilities, that there is no other word, or words, to express it.

Note the order of mention; Love first. This is actually something we are capable of, but so seldom exhibit. Most often this is a word used to signify desire, or need. And it’s all downhill from there.

God, second. Beyond us completely, at least until we grasp what the term “Created in God’s image” might actually mean. We can be, and really are, although almost nobody knows it, God-like, in our rather limited way. We can create, although most of us don’t.

Reality: Number three. That state that advises all of existence, including the non-existing. The clockwork that runs the whole show. Non-negotiable, non-flexible. Certainly non-human. The Chinese call this “Tao”, The Great Mother. Lao Tzu said “It Is Older Than God.” And of course, it is, since it gives rise to everything else, including the man-made concept of God.

So the first two are really manifestations of the third. Reality is what concerns us, here.
A ruleset. Fuel for the matter that the rules will act upon. Matter, operating under these rules. Energy forming into matter, then returning into energy. A closed system, as far as anyone can know, turning, turning, in an infinite space, through infinite time, infinitely. But how does this concern us?

People, it appears, mostly think Reality is a human creation. By people, I mean leftists. Although many conservatives subscribe to the same very muddy, shallow thinking. This must be a human failing, to kick God out of his throne, sit themselves down in His place, and proceed to demand things be as they desire them to be.

To hear Christians speak of God, is often to witness the utter absurdity of such thinking.
The Christian God needs people to serve Him. Fight for Him. Worship Him. And if they don’t do that, to His specification, then He rages and exacts terrible vengeance.

It should be quite clear, really, that such people are actually describing themselves, when they speak of God. If God were really like that, what sort of a God would He be? The sort, clearly, that atheists currently seek to eradicate, once and for all.
But the atheists, are, if anything, even worse.

By denying, completely, anything like a God, atheists have no baseline from which to operate. They exist in a vacuum, lacking any context. This is why they can be such hypocrites, such liars, and make so little sense. Lacking context, any word means anything, any behaviour is equal to any other. And nothing, but nothing, leads anywhere but to chaos.

So it goes.
People started living in cities, and once they did that, Reality was kept at arm’s length.
It became a human construct, that took its place. People started to think they controlled Reality, and had no further need to respect it. They made their own Reality. To their own specification. Except there never was a specification, that all agreed upon. So the only thing that was agreed upon was that Reality was reality, and everyone knew what that was.

I was involved in a hurricane, once, at sea. The most memorable thing about that, among rather too many memorable things, was the distinctly uncomfortable realization that I had no idea how bad this was going to get. It went right off the scale, and kept right on going. For all I knew, it might not have an end to it, and even if it did, I might well not be around to see it.
That’s Reality.

If you have one bit of respect, about you, then you will respect Reality.
It rules. You don’t. Simple.
This is what provides the political schism we see every day.
While there are many differing degrees of conservatism, it is based, always, upon respect of some sort, towards what we know as ‘the natural order’. We are this way because we can only be this way. We look at the sorry performance of the left, and stand stunned into bewilderment at the manifest insanity of it. The incomprehensible delusion. And we don’t know what to make of it.

Make nothing of it. It is what it is. It is what happens to people who choose to abandon all context for living, and live solely on desires, emotions and selfishness.
This is what The Bible refers to as evil. It is as common as dirt. It is easy, while its opposite is not.
Created with free-will, we are, so it is said. And this is true, to some degree. We may choose the path less easy, although the ones who do, may have little choice in the matter: it is hard wired into them, probably from birth.

Like I said: I was never going to do a good job of writing about this subject. But here it is, and this will have to do, for now. There is very much more that can be said about the nature of Reality, and its enormous importance, to us. But that’s for another time.

Remember this, if nothing else: when people speak of Reality, they are highly unlikely to have any idea of what it is they are referring to. Unless they have a baseline from which to operate. And these days, who does?

Hunting Innocent People to Build a Narrative | Means and ends