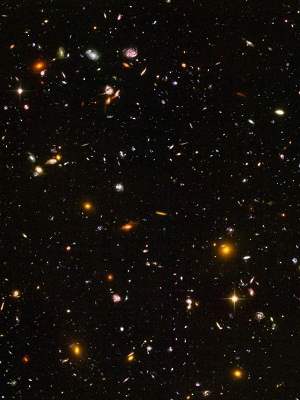 There was nothing else that existed. These things bore no names.
With nothing to name them, they existed then, now, and always.
Eternal Mystery.

In the beginning, there was The Way. There was also The Chaos.
Balanced, in harmony, they were The Mystery.
The Mystery lay in eternal balance.

Later still, there came Man. And Man was as the creatures, and the birds, and the plants, and the fish.
Man gazed at the heavens, and stood in awe of The Mystery. He made his way, among the many things, and prospered.
With Man, there came Wonder, at the endless things laid out before him.
With Man there came Worship, and the giving of thanks.

The Way, and The Chaos, in balance, contained The Mystery.
Within The Mystery, lay balanced, the many things.
Without, lay the cosmos, that too, lay within.
And Balance was The Mystery, and it, the Balance.

The Chaos played its part, as did The Way. For neither could exist, without the other.
As waves, against a familiar shore. Ebbing and flowing. Breathing in; breathing out.
Decline giving rise to rebirth. Rebirth to decline.

Always, there was The Chaos. Always, The Way.
In, and out. Forward, and back. Living, and dying. Each in its time.
Beyond knowing. Beyond naming. Beyond dreams. The Mystery.

To understand a thing, one must stand under a thing.
Standing under, can be called humility, and with humility comes understanding.

The ocean stands lower than the world of men. Thus it is humble.
Men sail upon it, seeking themselves, and are humbled by its power.

Humility has become an almost extinct attribute. Who do you know, who exhibits it?
If it is exhibited at all, is it real, or merely the appearance of it?
Uncool, outdated, weak and wishy-washy; what use is it, anyway?

Humility has a purpose. It is an attitude that allows a view of things, unfiltered by opinions, likes, dislikes, or predjudices.
It leaves things alone and lets them be whatever they are, while consideration of these things takes place.
Consider:
1: I see a mosquito. I don’t like mosquitoes. I try to kill it.
2: I see a mosquito. I notice it is alive. Both it, and I, share this state. We both have lives.

Big, small, wild, tame, beautiful, ugly, threatening or benign, life is worth something, to everything that lives.
To understand this, humility is necessary. The appearance of humility will not suffice.
From mosquitoes, we can move on to all kinds of people and things we may, or may not like, and see them in a different way.

Understanding is as mysterious as any other mysterious thing. It is better to employ it wisely.
Apply it to everything, without respect, and it may simply destroy everything it touches.
Understanding a thing, may honor it, for what it is.
Or categorize it, diminish it, put it in a box, and forget it.