by Jonathan Peter Wilkinson on September 21, 2018 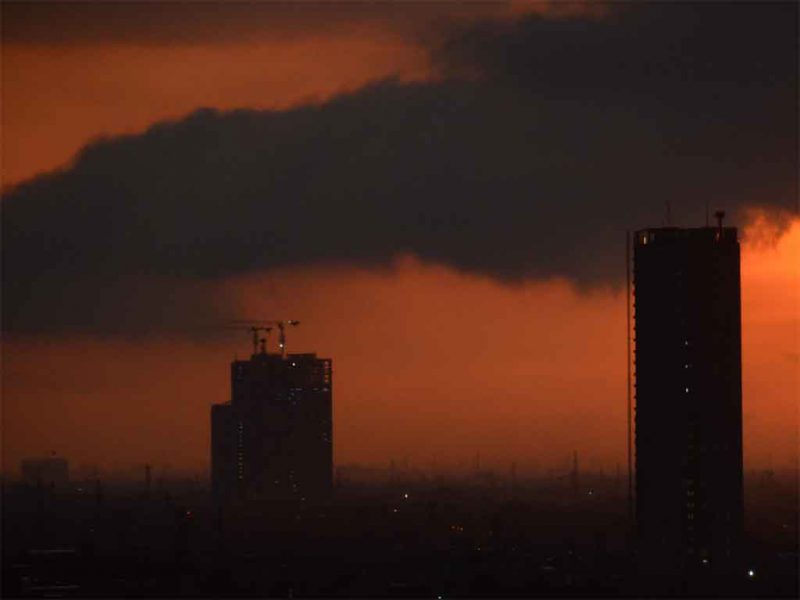 Organic Chemistry is hard. I personally found it harder than any STEM course that I took until I studied Earth-Sun interaction in a graduate level Geophysics Course. The old joke is that you just put some Hydrogen and Carbon atoms on a stick and call it a Hydrocarbon. That gets a solid B some places, but it doesn’t really help you understand what is going on.

I didn’t know what I was talking about most of the time when I did organic because it is where Physics, Chemistry and Biology all have a nasty, screwed-up car accident. You have to know an awful lot of stuff that isn’t pure mathematical chemistry to understand how organic molecules interact with the world we live in. Therefore, most of us don’t. Therefore, as a society, we are probably dorking things up when we encounter problems involving organic chemistry.

One organic chemistry problem we may be facing in our daily lives involves the chemicals that we leave in our environment as a result of our consumption of pharmaceuticals, plastics and other petrochemicals has possibly altered the chemistry of our atmosphere and water systems. This, in turn; has interacted with each of us in ways that were neither desired, nor predicted when we started popping the pills or playing with the other chemical substances.

The release in America’s waters of biologically–active chemicals – especially chemicals similar to hormones – is such a threat. They are in our water and food. Evidence slowly accumulates of their effects on people but as yet without strong conclusions. They might be contributing to men’s falling sperm counts. And to other ill effects, some of which cannot even imagine today.

Like most of the rest of Amerika, this has a feminizing/snipping effect on the cute, little boys. To properly follow scientifc method, we start with an observation.

Male fertility is dipping, and fast. Sperm may prove to be the greatest casualty of modern life. Last summer, scientists at the Hebrew University of Jerusalem found that male sperm counts had fallen by almost 60 per cent in 40 years.

We then attempt to hypothesize based upon our body of knowledge surrounding the observed effect. The British Medical Journal offers us more information regarding the current state of male reproductive health.

Should we be concerned? Is male reproductive health really at risk? Meta-analyses have some inherent limitations. However, an important and often overlooked point about data on the quality of semen is that trend data should be interpreted with a holistic view of male reproductive health problems, including parallel trends in testicular germ cell cancer (TGCC). Incidence of this cancer has risen substantially over the past few decades, particularly in young men.4 Increases seem to be occurring even in countries that have had low incidence. TGCC is linked to risk of poor semen quality…

And not only are the swimmers a wee tad less athletic, but there are significantly fewer of them now than there were in 1973. This taken from comparative time-series studies of randomly sampled men.

Other studies paint a less dire picture. An article written for The Urology Clinics of North America argues that sperm counts are driven by 5 micro factors: abstinence (the longer you wait, the fuller the pistol), temperature (yoga pants are for the ladies), season (rises in Spring, falls in the Summer. Colinearity w/ temperature maybe?), smoking (13 to 17 percent decline in sperm counts), and da ganja (God’s way of protecting you from Stoner’s Bad Judgement).

Fisch identified six studies that argued sperm counts were in decline. He cited 16 that argued for stasis or a slight uptick in sperm counts and five that were ambiguous. It was of interest to me because of the statistical mathematics I often work with that the larger sample sizes were from studies that did not argue for massive declines in sperm counts. This could suggest that sperm count declines from hormonal or petrochemical sources is yet more junk science.

This leaves me with two conclusions. The comfortable (and I believe less likely result) is that sperm mortality due to chemical sources is another environmental scare vector. Party on Garth! Use all the plastic and feed your lady friend all the hormone pills you think are necessary to manage your sexual appetites. It would be nice, if true.

The 2nd conclusion is similar to how I approach Climate Scientology. There is a good physical basis to believe CO2, CH4 and other gasses released from biological and industrial processes do consistantly absorb light waves in select wave numbers that are commonly grouped in the infra-red portion of the radioactive spectrum. Given the temperature balance of the Earth, it’s atmosphere and The Sun, the Earth emits radiation at wave numbers similar to what CO2, CH4 and other so-called GHGs either absorb or reflect. This would suggest that some Athropogenic Global Warming should be occurring.

The observations of temperature didn’t initially match the rates and timelines of emissions. The Doomsday predictions of the IPCC never seemed to show up on schedule. The proponents of the AGW theory of Envirodoom became emotionally, professionally, politically and financially invested in the theory being true. They therefore lied about the timing, extent and effects of GHGs being pumped into the Earth’s Atmosphere. This means that a real problem, of a lesser magnitude is occurring and being forcibly ignored because the proposed solutions have far more to do with people getting power and money away from other people rather than protecting the planetary enviroment.

My intuitive Fake News Detector is pinging over the sperm death stories. I think some noticeable amount is occurring. I’ll call it a small effect globally with larger, pollution source-driven local pockets of intense male infertility. I think small N studies proclaiming 60% sperm death are more prone to being railed by local variation and then over-interpreted on a global scale to look scary and impressive when they splash across the cover of Scientific American like a Dirk Diggler Money Shot.

I’ll present a tale of two curves in the chart below. 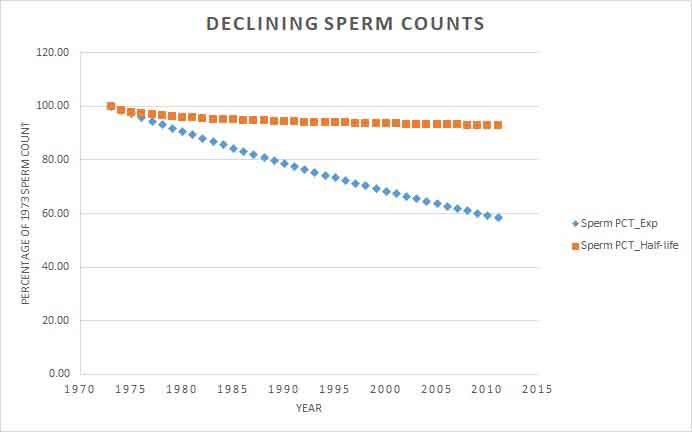 The one curve is the BMJ 39 Year 1.4% annual decline curve. This is your typical IPCC Sweet Meteor of Death grab for scientific funding. The 2nd curve is a more traditional half-life curve that kills a decreasing amount of sperm every year. This half-life curve is more in line with what we deserve when things decline in real life. Predators kill less prey with the same level of competence as the animals they hunt grow less abundant. Flu epidemics wipe out fewer young children as the existing population thereof is increasingly deceased or immune.

A similar thing will happen with spermicidal anthropogenic pollution. In a heavily-populated environment with a large concentration of laden males, these chemicals will go off like old polio epidemics. Sperm counts will drop and droopy-dorks will pine longingly for the fjords. In less-populated or previously effected areas, spermicidal vectors will have fewer successful meetings with the target for their malice. The rate of sperm count decline will decline due to the inherent decrease in opportunity. This gives you the hypothetical JPW Half-life Curve of Sperm Eradication you see on the chart above. This is what I believe is happening based upon previous experience with negative interactions between man and the terrestrial environment.

So, yes we are monkeys with car keys who accidentally put dick-deadening substances into our atmosphere and water sources. This is stupidly stupid and it should be abated, controlled and ultimately eliminated by some sort of an effort along the lines with the successful Montreal Protocol or Clean Air Act of 1973. That won’t happen any time soon, so you, as an individual male, will have to exercise some self-defense. Work out, eat healthy (garlic and cinnamon are good for this particular man problem), if you are older and weaker like your humble author, take a supplement with Testofen or get used to experiencing fewer interludes of sexual pleasure and accept a lower likelihood of producing more children. Our inability to control what we consume, throw out and eject into our environment is more than likely making the lead go out of Amerika’s national pencil.