A leap of faith past faith 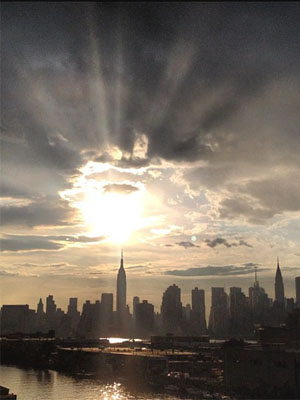 An interesting trend from past years has seen people who are fundamentally atheists switching to religion.

They are doing it for practical reasons: our society lacks order, religion provides order. A village priest takes confession and knows how to best guide his flock. A church is a place of safety, a rock in a storm that doesn’t shift with the trends, and thus you can rely on it.

Indeed, churches are a lot like conservatism. We don’t believe we can distract ourselves with the novel and trendy because we don’t believe in distraction. We believe in picking our battles, applying ourselves and engaging with our inner heroism to make good results. It’s how we enjoy life.

Liberals and others look for happiness — maybe it’s under the rug? in the cookie jar? — which takes them to a different place. When one wants happiness, life becomes a habit of avoid things that aren’t what one thinks of as “happy.” At that point, it’s a shopping trip for face values that meet the internal wishful thinking of the individual.

Conservatives on the other hand see happiness as an emergent property. You don’t achieve it by crusading for it; rather, you do the right thing, and put your house in order, and find a transcendent purpose in life. Then one day you wake up and realize that you’re content. Then you enjoy being content. Finally you realize you’ve been happy for some time.

It’s almost like we believe in the world, life and the cosmos, where liberals have doubts. To them, life is more of a wretched task. They see most of it as threatening and ugly, so they retreat within. But like all runnings away, this one fails because it leaves them avoiding bad things, not seeking good things.

There are some who insist the antidote to this neurotic state is religion, and that religion can be sought through faith. What is faith? It’s essentially a belief that a God or something like one is the only possible way for this world to come together. It’s a listening to emotional intelligence and intuition. After all, young children intuitively believe in God.

However, some of us are not content with faith. We don’t argue against it, but for our own wiring, we need a logical underpinning to any religious faith we might adopt. But here is where we step off the treadmill: we aren’t talking Enlightenment-style linear logic here. We’re talking about something much older.

When ancient man thought, it was systematic but not linear. He simply considered all of the options not in an order, but by probing the edges of thought and immersing himself in a meditative multi-factor analysis. Modern thought instead operates like a simple matrix: isolate factors, compare each one before and actor, and ignore any synergistic effects which might point to an underlying cause. That is linear logic.

Holistic logic, which is what ancient man used, allows you to consider all the factors at once. Instead of hearing an isolated tone in a laboratory, ancient man heard symphonies. He demanded that his logic unite the stars, the gods and his own imagination. He did not want to reduce, deconstruct and isolate, but he wanted to combine, surge forth and create!

When we get past the modern mindset of linear logic, called rationality, we can begin to think clearly again. The energy spent forcing complex data into simple data structures is over. Instead, we join it all at once. The process called “mythic imagination,” by which we use our imagination to construct metaphorical narratives around the whole of reality, comes from this.

At this point other puzzle pieces fall into place. We realize how much our thinking mirrors the process of nature. We realize how much of us is intuition, and how distant the body and its urges become when we think deeply. We begin to see the physical world not as a cause of itself, but as the surfacing of a wave, with a vast ocean of thought beneath it producing the impulse to create that wave.

Within this frame of mind, “faith” becomes something different. We see the order of the universe, and see how its origins operate. Then we take a deep breath and question the universe itself. It is a good universe; after all, from no obligation to create anything, it flowered life. This brings us a new kind of faith: the faith that the cosmos ultimately tends toward good.

In that moment, logic and emotion unite with imagination. This is a good place, with underlying causes, and those causes seem to conform more toward the metaphorical notion of a vast sleeping consciousness that dreams us all, and sweeps us up in its care so that we can access the opportunity before us.

Through this portal, we see all religions as metaphors themselves for describing this nature of reality, which is nearly inexpressible. We suddenly have no need for faith, for we have seen the probability of metaphysical origin to all. And thus we take a leap of faith, past faith, and comfort ourselves with the beauty of existence.