A curveball in the recycling debate

In many towns, recycling is not only encouraged, it’s enforced. Some communities use a limited “toter” system where one has to pay more for additional bags if the toter is filled up each week. The flip side is, things like plastic bottles, metal cans, glass jars, and just about any paper product including junk mail can be tossed into recycling bins. 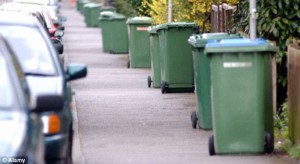 This is wonderful in a way – why let any idiot throw away however much trash he/she wants to each week when it’s clear there are reasonable limits a town can and should impose? But it also begs the question: what happens to all that paper, but moreso all those other products like glass, plastic, and metal once another truck using more gas and more manpower picks it up during a separate trip?

Recycling makes many people feel good, but feelings are not the best test of environmental soundness. When it makes more sense to recycle than to throw something away; government compulsion isnâ€™t needed. And when recycling is a profligate use of natural and human resources, government mandates canâ€™t change the fact. Big Brother can force you to recycle your garbage, but that doesnâ€™t make garbage-recycling green.

Good point. If recycling really answered any tough questions, it wouldn’t be as easy as throwing would-be trash in a different bucket.

It’s nice and easy – and it massages the ol’ ego – to sort your garbage and feel good about how much stuff is in the recycle bin this week that could have gone to the trash instead. We just assume that since recycling is a feel-good activity and approved by just about everyone, that we should feel much better when we see the second truck pull up every week and collect a different set of trash from the one that came an hour before. We feel productive; the trash is still taken to a far-off site; everyone wins.

Unfortunately, the writer had the opportunity to take the point further and talk about the real problem – humanity itself – but opted not to:

Popular impressions to the contrary notwithstanding, we are not running out of places to dispose of garbage. Not only is US landfill capacity at an all-time high, but all of the countryâ€™s rubbish for the next 100 years could comfortably fit into a landfill measuring 10 miles square. Benjamin puts that in perspective: â€œTed Turnerâ€™s Flying D ranch outside Bozeman, Mont., could handle all of Americaâ€™s trash for the next century â€” with 50,000 acres left over for his bison.”

Let’s assume those facts are correct. What happens in a century? Does that calculation take into account population growth, and if so, how much?

Jacoby falls victim to the very thought process he’s calling out: he notes in the article that landfills are great because we get methane gas out of them and we frequently turn them into golf courses and parks, so everyone wins. Let’s just make tons of landfills since we have the space – out of sight, out of mind.

There’s no thought to why we need to recycle in the first place. Recycling came about as a solution to all the trash we produce in society. We produce lots of trash due to two factors: the number of people we have, and the amount of disposable stuff we consume, including McDonalds’ burger wrappings, disposable diapers, and styrofoam coffee cups.

So why no talk of solving the root problems? We can break them down pretty easily:

1. Amount of trash produced: we live in a throwaway culture, where tons of plastic is used to package products, where it’s encouraged to throw things away after only a few uses, and where people upgrade even laptops and cars every other year. As a result of insatiable consumer demand, many products are made to be disposable. Why would you build a car to last twenty years when people won’t keep it after ten, or even five?

Let’s also not forget that infrastructure has been set up to haul away garbage with minimal effort on the part of the consumer – whenever it’s easier to throw something away than keep it and fix it, that’s what people will do.

2. Number of people producing trash: Animals don’t produce non-biodegradable trash, unless you count housepets and their dog poop bags, toys, etc. So the amount of trash out there is mostly due to human activity.

How do we reduce the amount of trash a society produces? In part, by moving away from a consumer-driven culture, and in part by reducing the number of people who live within its borders.

You won’t see many newspapers – even editorials in newspapers – tackling those problems, because as daring as Jacoby seems to be when saying that greenism feels good but may not accomplish much, he’s only willing to touch the tip of the iceberg. The real problems remain buried, sort of like a golf course over a landfill.