“Your rights end where my rights begin.” 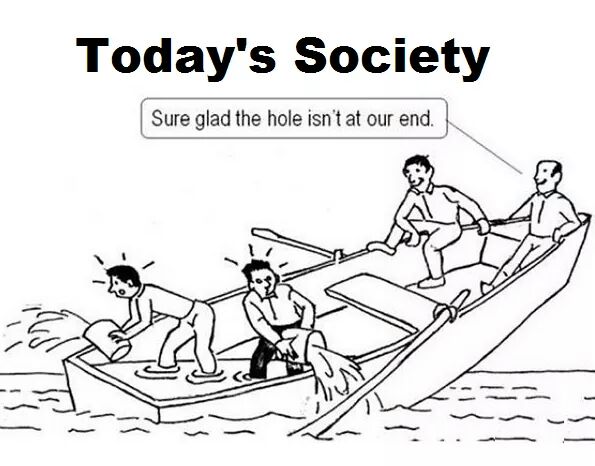 In the byzantine labyrinth of justifications and rationalizations that comprises modernity as an idea in practice, one trope — and it should be called nothing greater: an intellectual fad, trend, talking point or defense — that stands out is the idea of freedom. Notably, that we can have a freedom such that anyone can do anything, unless it infringes on the same freedom of others. Rationally it makes sense, with nice compact logical containers and clear defense against overlap. In practice, it denies everything that makes life beautiful and challenging.

The notion that “my freedom ends where your freedom begins” (and assorted variations) fulfills this convenient mental convention. It allows people to feel confident in a logical system with clear endpoints; if someone murders, that violates the freedom of another, and similarly with rape and assault. This gets more complex when we look at things like cigarette smoking in public and other factors addressing the commons. For example, how it is infringing on the freedom of another to cut down a tree in a forest? Perhaps they are deprived of the enjoyment of that tree, but then, we seem to be really stretching for that one.

Similarly, excluded middles abound with this tactic. What about the right not to hear loud music? In theory, that music is infringing on your freedom of silence, but silence is an unreasonable expectation; where does it stop? Do we ban engine noise, flatulence and coughing, or declare that we have a sort of minimum standard for noise and anything above that is prohibited? Then we might run into problems with construction noise and dust. You have a right to renovate your house, but your neighbor has a right to be free of your renovation. And yet, if the house is not repaired, it will fall down, and then his rights will be infringed anyway. This practice only works when everyone owns enough land to be separated from the sight and sound of others and, while that is probably a good idea in itself, it is impracticable because that would increase the distances between people and places to a staggering level. The commons are excluded, as is any shared space in which people interact. Do others have the right to ask someone conversing to be quiet? His freedom to speak collides with their freedom to silence. And on the flip side, if too many people are active in the same area, it may infringe on his freedom to be heard. Ironically, the loud person and the person wanting to quiet desire the same thing, which is a blank canvas on which to live. This blank canvas however conflicts with the very nature of society itself, which is sharing of space and resources in a way that does not fail, which in nature is generally unequal and does not involve absolute rights. The mouse has a right to seek food, but it may also involve the anti-right of being eaten by an owl. Heck, the owl has the right to seek food as well, and this distills “rights” down to what they always recede to, which is a conflict of strength. So much for rights.

The greatest excluded middle is the right to choose a type of society. Many of us want to live in quiet places so we can pay attention to our own internal thoughts and those of others without intruding noise; this creates both a fascism, in that people who make noise will be restrained, and a liberty, in that we will be free from noise. Taking this further, what if someone wants a conservative moral order? Under “rights,” each person is an atomic granule which does what it wants, and everyone else must accommodate that externalized noise and social consequences. Individual acts have consequences on the social order itself. If you set up a Swinger’s Club in your house, that encourages others to do the same, and to differentiate themselves, to take it to further extremes. If you choose to smoke weed, that creates a community where stoned behavior is the norm. What about people who want a community that is the opposite of stoned behavior? Are they supposed to “just move,” and then wait for the destruction of their community when stoners see it is a nice place and move in, tearing apart the social order? “Rights” protect those who are doing what destroys social order more than those who are upholding it, and gradually grind every society down into the same old individualism, solipsism and deception that governs third-world places.

This most recently came up with gay marriage. What about freedom from gay marriage? If you want your children to grow up in a moral society, you want negative influences outside; we are not speaking here of influences like Socrates that consist of reasoned discourse that applies to the 5% of society that might understand philosophy, but constant behavior which innocents especially inexperienced ones tend to unconsciously emulate. If you do not want your kids thinking sodomy, dope smoking and loud noise are okay, where do you go for a social order that reflects that? A gated community perhaps; but then you have lost your ability to have a normal life, and exist entirely in retreat and paranoia.

This is the struggle humanity faces after The EnlightenmentTM, which is that we recognize the problem is not a need for individual rights, but shared rights. This includes the continuity of tradition, heritage and culture; the ability to have values higher than “do what feels good”; and even the ability to have a society where intelligence is a prerequisite for interaction. We are the ultimate minority, those of us who recognize the excluded middle of the commons, and want to have standards, versus all of those whose “rights” conceal a desire to destroy standards so the solipsistic ego can wreak havoc on otherwise nice places. Such people are drawn to nice places, not only because they are nicer to live in, but because they want to destroy them. For those people, the existence of anything but their own emptiness is a threat, and they wish to tear it down. That is the circular and perpetual conflict in which humanity finds itself enmeshed several centuries after the birth of inalienable “rights.”