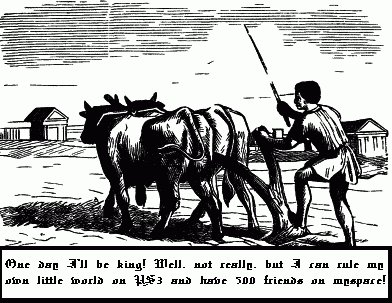 The cowboy/frontiersman of the old West re-emerged into popular consciousness after a few visionaries in the late 19th and early 20th centuries found themselves strangely disgruntled with the end of rigorous frontier life and at their expanding waistlines. They realised that the comfort and luxury their predecessors had worked so hard for had merely ended up making them fat, bored and spineless. Scandinavian heavy metal bands in the late 1980â€™s and early 1990â€™s also arrived at the same conclusion, finding in their own cultural heritage the pre-modern figure of the viking warrior, exaggeratedly enshrouded in Norse legend as inspiration and ideal for life.

In those often mythologised days we call the medieval period, your average peasant toiled ceaselessly in the fields for a pittance. Rich landowners owned the field and even the peasant himself. He had no real concept of time as we know it today, he just worked from dawn until dusk. He mostly drank local ale brewed by monks because water was too filthy and contaminated.

No doubt our modern cyber-peasant feels much more important and â€œfreerâ€ than his modest forebears as he finishes toiling in his skyfield of concrete and glass at precisely 17:00hrs, falling into the tavern (probably Irish themed) and getting wasted on his choice of cheap foreign beer as his water has too much fluoride in it. Iâ€™m sure he enjoys the freedom to buy whatever colour couch he fancies, or to add an enormous spoiler to his Mitsubishi. In reality his life has not changed one bit, however his own self-deluded perception is that it has.

He remains a simple peasant just as he was in medieval times, despite the trappings and comforts that a relatively rich Western existence now provides him with. The sad fact is if harnessed correctly the peasant can be a useful member of society working to benefit the whole, no matter how menial their job might be. His job satisfaction derives from that very fact. He knows his place, his lot allocated to him in life. We canâ€™t all be king and thatâ€™s something accepted, not resented.

Today however, our peasant is working to benefit international commerce. He is a battery with a little wire trailing off into an engine that powers the grim spiky tank tracks of the modern world. He realises that his tedious labour benefits no one but the faceless executives sitting around drinking virginâ€™s blood in a swanky boardroom somewhere. He knows how terrible his mindnumbing existence truly is and so he dreams up fantasies of being a rockstar or James Bond or whatever. He fuels this with popular culture which in centuries past used to mean the plays of Shakespeare (which were enjoyed by peasant and nobleman alike) but now means American Idol and other hollow and desperate potential means of escaping the smiling horror of 9-5.

It took this rabble we call the â€œcrowdâ€ centuries to win its lazy comforts (though in truth they were handed out to keep them docile and as incentives to work harder), it will only grow little balls and shout at the TV or post on internet forums if it feels those comforts are threatened. â€œWhat about my rights?â€ they wail, â€œstop keeping me down!â€ they yell, â€œI can be anything I want to beâ€ they say defiantly, bottom lip a-trembling. Instead of confronting life, our peasant chums are happy to pursue escapism and self-delusion of every possible kind. Without such distractions they face a very miserable reality check indeed, as theyâ€™re unable to face life as it truly is.

Whereas those malcontents who in finding little of worth in modern comfy living look back and attempt revivals of pre-couch spirit, the modern peasant thinks back to the days of his predecessors and says â€œnever againâ€. After all, how the hell could he live without his DVDs and PS3 games to keep him safely ensconced in his vicarious fantasy world? The fact that spending time consumed in an online game called Second Life is a massively popular peasant pastime is surely no coincidence (but thatâ€™s a tale for another day).