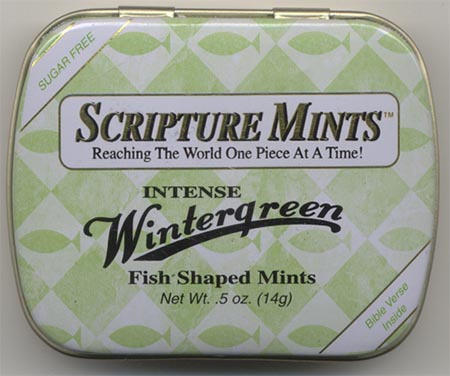 So in the name of being open-minded, I tried the “scripture mints” that came my way through interesting channels. On the whole, I have a rule that I will consider anything, but if I figure out it’s based in bad thinking, I bail out and head for the hills, never to return.

My first concern, of course, was the ingredients, because one of the best things our government has done is require manufacturers to list what stuff they’re putting in foodish items:

What an interesting collection of lab experiments. It’s rare to find real mint oil, even though it’s not expensive, in mass consumer candy; I understand the use of non-sugar sweeteners as well. But add it all up and I’m not feeling super thrilled about people who are cutting costs on a half-ounce of mints.

The taste was not bad, but not distinct, either. Like the Wintermint Lifesavers that use artificial flavor, it’s a one-dimensional “minty” but not mint taste that somehow ends up a lot sweeter than it should. All of the edge, bite and fullness of the taste is gone, but no one would confuse it with chocolate, I guess. Still, I wouldn’t recommend it.

Consistency on the mints was good. In fact, these are some of the better-dissolving mints I have known. These little fish — and who can resist a fish-shaped candy? — stay on the tongue for about ten minutes, slowly losing edges and finally shape until they are like little blurry coffins eroding in your mouth. Good points there.

Crunchiness was not bad either. If you’re really a person on the run, you’re going to crunch your mints and not suck on them. After all, people sucking on tiny things look like they have a forebrain disease. I would say these mints score well on the crunchiness scale because they are crunchy but not too hard, although with the artificial flavor cheesiness, it’s hard to want to crunch them.

I guess my summary here would be: why bother? They’re too small to have scriptures on them. They’re not better than competing mints with better prices. They may work well on the breath, but I wasn’t brave enough to ask anyone for ratings (“Hey, I just ate a pound of onions and had a scripture mint. Want to see if Jesus can hold back the tide of stench?”).

If I were in charge of a modern church, I would focus less on making it an ideological brand than a community identity and center. People crave a community center and a communal sense of togetherness and clarity, of having a purpose to their existence as a group, so they don’t feel that obligation to each other is arbitrary.

People like knowing that their efforts go toward something good. Scripture Mints, like so many mass products ideological and otherwise, may not be it.

Diversity is destructive | Ye newe deluded peasant and his PS3