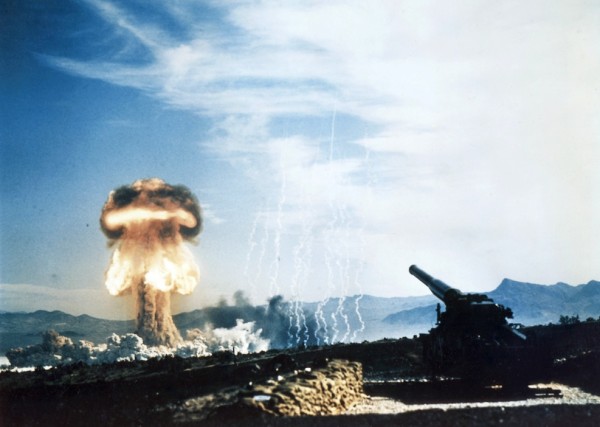 Crowds of immigrants surge the shores of Europe, bearing rape and terrorism. They hate the inhabitants they are about to replace. Similarly, in the United States, a vast wave of Mexican immigrants come with the words la raza and reconquista on their lips. In the Middle East, China and Russia conspire to dominate Syria as they rattle sabers at the West with overflights and provocations.

Is World War III upon us? Let’s hope so.

The West is under attack because it has telegraphed that it is unwilling to defend itself. This is because it has become a cash cow to its leaders. A cash cow is a business with no future that still has useful assets and some customer base, and the only thing left to do is extract that cash and put it into a more rewarding investment.

Our leaders have been cashing out for fifty years. We won the last World War, and then threw the reins to whoever was standing nearby. This new elite realize that was our last hurrah. They see that, with the advent of unions, welfare, 1968 style uprisings and leftism as a fad, they have achieved victory. But victory means death, because it renders a nation dysfunctional. So they are selling off its valuable properties, including citizenship, for their own benefit; they know the West is dead and want to take the wealth for themselves.

How did we fall so far so fast? Plenty of misguided people will come up with scapegoats — the rich, the Jews, the whites, the blacks, the Quakers — but the fact is that it was democracy. I quote the eminent analyst Ronald James Dio:

It’s over, it’s done
the end is begun
If you listen to fools…
The Mob Rules

Democracy is the triumph of the stupid over the smart, and of compromise over decision-making. Among the foolish, who make up the vast majority of humanity, it is popular because it gives them power over the smart. Fewer smart people means that in popularity contests smart always loses. But even smarter people are among attack under democracy. Put people together in a group and they end up with compromises because in the middle band of smarter people there are foolish but clever people who insist on being “unique” and representing their own interests at the expense of the group. Cue the kindergarten teacher saying, “Can’t we all just get along?” The committee enforces getting along over getting it right and you get a compromise over time. Democracy paralyzes leadership. It also makes citizens passive. This creates bloated empires full of entitled bratty citizens who will not defend themselves. Cash cows, in other words: moribund wealth sacs who are alien to reality and non-response to the market.

Putin and others are moving in for the kill. They know that leaders such as Obama and Merkel (or Clinton and Carson) will never endanger their own popularity by embarking on an unpopular war, and not surprisingly, wars are always unpopular except when we’re winning by a mile against an easy enemy. As long as the enemies attack slowly, the slumbering lummox of democracy will not respond because to do so creates too much risk for its leaders, who are there not to lead but to profit. Its leaders are so paralyzed with fear of public opinion of the herd that they cannot even turn away obvious criminal migrants, or stop granting new “rights” to these migrants, or defend their citizens against a rising crime wave. Giving free things to the helpless will always be popular, because it gives the voters an endorfin rush of altruism. They get a little squirt of chemicals in their heads that says “You’re a good person, you’re doing the right thing and everything is gonna be all right.” Like heroin this makes them happy but then when it fades they want it again. So they compulsively perform altruistic acts. Ban the national flag? It’s racist. Give immigrants free healthcare, housing, money at the expense of our own citizens? Squirt — do it. Allow illegal immigrants with mental health problems back into the country? Gotta have that squirt, gotta do it.

Our leaders are pretenders, actors and salesmen. They do not respond to real threats because they are too busy inventing opportunities to feel altruistic. We need the altruism because we realize we are doomed and the little squirt of altruism heroin makes us feel like we can make it through another day. Zombies we march forward, going through the motions without realizing that none of what we do is necessary or effective. The hungry wolves of starving nations, including over-inflated and weak ones like Russia and China, circle at our gates because they know we are the drugged obese carcass of a once-great empire destroyed by democracy. They also know that our rainbow army, chosen for altruism and not effectiveness, will get itself owned within seconds of coming into combat. Obama and Merkel have helped this by heaping PC demands on our militaries, driving anyone sane or masculine into the mercenary field.

Mercenaries however cannot take the place of a large standing army, and the next world war will be one fought Asiatic-style: large groups will cancel each other out through battles of attrition, and whoever had an excess of soldiers will prevail. World War III may be our only hope, because it will force us to get our heads out of the cloud of illusion created by liberalism and focus on the actual real world instead of the shadows projected onto a cave wall formed by democracy, altruism, social morality and other proxies for reality. We will again have to struggle for our lives, and we will either ditch the liberal programs and get focused on victory, or we will quickly be eliminated. It is the wake-up call the West has needed since at least 1945 and, while the carnage will be vast, we will not survive without it.