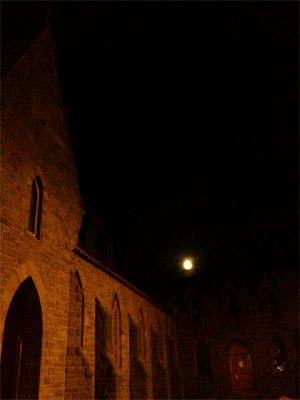 The woes of humankind generally consist of a failure to recognize adventure in adversity, and thus to retreat into our own minds.

The following are thoughts for the heretical.

Our greatest woe is denial of time. We pretend it isn’t there and passing. As a result, we tend to shy away from end-dates to projects and times when we want to see end results.

Instead, we like to hang out in a perpetual present tense, where we are working gradually toward some unspecific and unmeasurable future state.

Not a result, but a state. That is like saying that we want to work toward a time of working, not a time of achieving the end result of that work.

One consequence of time-denial is perpetual compromise. If you have no ultimate goal or task to achieve, you view life as a series of incremental changes moving vaguely in a favorable direction.

As a result, you are open to compromise as a way of life. Like a relationship that will not lead to marriage, open-ended time scales impose only one requirement on the humans in them: don’t rock the boat to the point where you endanger the relationship.

However, since there’s no goal, this is a simple task of avoiding certain behaviors that set off the other person; these are easily avoided since nothing needs be achieved except avoiding those behaviors.

In those situations, compromise is the best option. There is no goal or time schedule to endanger. The only risk is making the relationship unstable. People compromise, and then work around the compromise.

On the other hand, having a finite goal and time period lends itself to excitement. A relationship that is intended to lead to marriage is an ever-intensifying process, without falling into the becalmed state of apathy of a “maintenance” relationship.

But we are our own greatest enemy, and in fear of the woe of finite time, we languish in an apathetic perpetual present of lifestyle maintenance, and evade all adventure.

Another woe is equality. It seems like such a good thing, but it causes an obsession. No one knows what the sum total wealth of a society is, so in an attempt at equality it must be parceled out unevenly.

This in turn puts people into a mode of wondering if they are getting their equal share. If someone else has gotten more, the wealth total has increased and so each individual deserves more.

Because equality is not determined by granular and organic situations, like a farmer working her land or a small businessman advancing his business, but by a central command, there is always suspicion that one is not “equal enough” and is missing out.

This creates a mentality where the equal citizen is constantly vigilant for what others have, and if they have something he does not, he feels not equal enough and demands that the difference be handed to him.

Our woe is in failing to recognize inequality as a form of game by which we struggle to produce and conserve more, with great variation between results in order to give them great impact.

These modern woes are schizoid in that they show us a difference between the face value of reality as it is explained to us, and the underlying thought process of people within it.

Schizoid thinking of this nature brings on a neurosis, or doubt of reality, because each individual must rely on the social answer in order to transact daily business, yet must also work around it or face dysfunction.

Woes of this nature signify how exhausted in its soul our society has become. Where former generations saw opportunity, we see obligation and tyranny.

It is no surprise that we live in the center of a herd of gadgets and entertainment, staying perpetually distracted and stopping only sometimes to view the outside world through a rain-streaked window as if some kind of disconnected dream.

Until It Explodes | Inhumanity