Witless crowd empowers its own devils

In a speech at the 1991 Bilderberg Convention, Rockefeller stated “we are grateful to The Washington Post, The New York Times, Time Magazine, and other great publications whose directors have attended our meetings and respected their promises of discretion for almost forty years. It would have been impossible for us to develop our plan for the world if we had been subject to the lights of publicity during those years. But the world is now more sophisticated and prepared towards a world government. The supranational sovereignty on an intellectual elite and world bankers is surely preferable to the national auto-determination practiced in past centuries.”

If you answer money, you’re right. Now assuming such people aren’t professional safe crackers centering their operations around bank heists, how do they amass such fortunes? 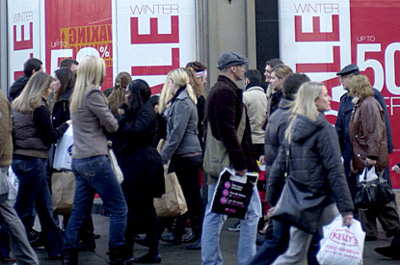 Simply put, the answer is hundreds of millions of consumers spending themselves into debt. There isn’t another consistent source of sustainment for globalist wealth. It is only the earnings of ordinary people in all their great numbers, converted into consumer spending.

If this process continues–if consumers get their debts down to reasonable levels–it will eventually make the country’s primary economic engine, shoppers, stronger and more sustainable.

It’s fair to say that most of last Friday’s G20 protesters, marching in downtown Pittsburg where the latest summit was held, are themselves corporate consumers. That’s right, they fuel the very engine of unfair effects of globalization against which they protest. 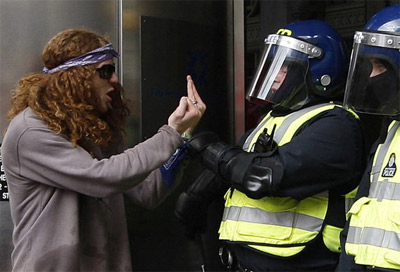 The protests are expected to continue indefinitely, which is another way of saying, mass protest is not expected to change anything, but you’re perfectly free to do so.

John Kirton, director of the G20 Research Group at the University of Toronto, said he expects protests to remain a fixture at summits and that he considers them a valuable part of democracy.

Maybe a change in perspective and behaviour is needed. If international capitalism is a problem, why run around in the streets like angry primates throwing monkey poo at it?

Protesters on Friday held up signs such as “We Say No To Corporate Greed,” and “G20 = Death by Capitalism” and chanted “Hey hey ho ho, corporate welfare has to go.”

The protest strategy is now predictable like clockwork, arriving any time and any place that globalists announce to the public they are gathering. The angry crowd is expected and as its history shows, impotent in its goals other than getting itself injured and destroying property.

Luckily, there are some others who have come up with some new ideas. Some of these are replacement economics operating in parallel under the larger capitalist dominion.

Others call for mass non-participation in order to “starve the beast” of its wealth and power. Still others propose spawning new societies under different rules in the hopes these succeed, inspire others around the world, and overtake the old order.

There are three main choices: