Why the rich want to get richer 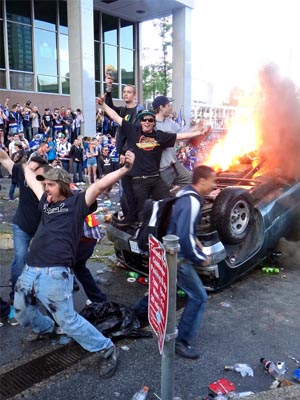 You hear this rather tired phrase: “the rich get richer, and the poor get poorer.”

What they mean is that the rich get richer, and so in relative terms, the poor have less value. They still have roughly the same lifestyle and expectations. But that doesn’t fit into a catchy phrase.

As globalism has rolled out across the world, the rich have been getting richer — because they’ve been trying to.

Now that our economy is global, the rich are smaller fish in a big pond.

Now that our global economy is unstable, it takes more money to have bought your way out of the system.

As we see the number of poor people rise, and crime rise, the only safe place to be is in a gated community with private security who are so well paid they can’t be bribed.

Look at Mexico, Iraq, Argentian or Brazil. The risk of kidnapping is huge. You’re not rich until you have private security.

The USA is heading in that direction. We talk about “the rich,” but no one ever defines it. To me, “rich” means you never have to go to work again, and you’ll be living well. That means private medicine, because the public plans suck. Private schooling for your kids, because the public schools suck. A gated community and bodyguards.

It used to be you could just be a millionaire, and do fine. Now you may need ten or a hundred million to truly escape the system.

And that seems to be what everyone wants.

For years, statistics have depicted growing income disparity in the United States, and it has reached levels not seen since the Great Depression. In 2008, the last year for which data are available, for example, the top 0.1 percent of earners took in more than 10 percent of the personal income in the United States, including capital gains, and the top 1 percent took in more than 20 percent. But economists had little idea who these people were. How many were Wall street financiers? Sports stars? Entrepreneurs? Economists could only speculate, and debates over what is fair stalled.

Now a mounting body of economic research indicates that the rise in pay for company executives is a critical feature in the widening income gap. – Washington Post

Why do they want this money? They must be greedy! screams the media.

But if you ask every person on the street, you’ll get the answer: yeah, I’d like to be rich. Rich enough to leave this all behind.

If you want to know why our executives are pulling away and leaving the rest of us behind, it’s because our society is collapsing to third-world levels of crime, disorder, filth, corruption and instability.

The only way out is to get rich, get into that gated community, and buy your way out every way you can.