For forty years now, we’ve heard about how the old generations didn’t know anything and were oppressive, but the new generations are coming to save us.

Starting with the hippies, who are now aged crones and decrepit hulks, these new generations have told us how the past was cruel, but they — the new way — are altruistic, compassionate and fair.

We can redefine words to mean just about anything, or just misuse them. We can use them to mean only a part of their meaning in the whole, and use that to fool you. If I tell you this used car has low miles on it, that’s only part of the truth — I forgot to mention that it has no engine. But hey, low miles. I didn’t lie.

Let’s look at the actions of these people, 40 years apart: 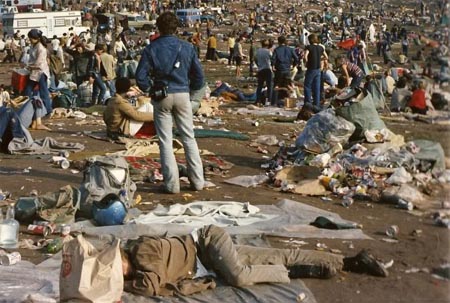 A garbage truck rumbled by, loaded to above the brim with filled green bags of garbage — the green bags passed around the audience enthusiastically a few weeks before. Along the sides of Hurd Road and the other roads in the area was more garbage. There were more piles of garbage in the woods on the way to the Hog Farm area, as well as huts and lean-tos, wooden booths, and thousands of flies. The Hog Farm area itself was empty and clean except for a few portable toilets, some scattered farm implements, and metal fence posts and tent poles. “Happy Birth” read a section of red snow fence. – The Village Voice

It takes $100,000 and several days to clean up the site. Workers bulldoze tons of trash and debris into a pit and burn it. – About 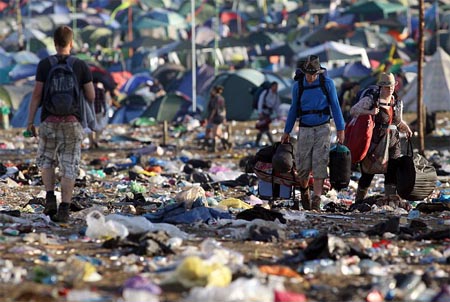 What started four days ago amid a sea of mud today ended with an ocean of rubbish as 180,000 revellers left the Glastonbury music festival site carpeted in cans, bottles and the odd lost welly boot.
Litter covered the ground as far as the eye could see in fields that for most of the year look as pristine as any of the surrounding Somerset countryside.
It will take an army of workers days to clear up the 900â€“acre site after one of the most memorable â€“ and controversial – festivals in years. – Article and picture from The Daily Fail

People show up for a “cultural event,” trash the place, riot, rape, steal, loot, burn and defecate all over everything they can find. In the meantime, artists sing about “all good things” — love, peace, justice, happiness, equality — and this is what they attract.

But the artists don’t seem to care; they’re interested in getting paid.

The fans don’t care; they’re there for a party, and it’s someone else’s job to clean up the mess.

Perhaps the people who shout loudest about being altruists are the most selfish.

Perhaps we should stop listening.

Interview with Daryl Davis, author of “Klan-Destine Relationships” | Why the rich want to get richer