Why New Right? Part One

An increasingly common theme expressed among people today is lack of choice. There are no elected candidates speaking on our behalf. Even in the face of our mounting financial and therefore temporal contributions to our own civilization, we have no representation. Lately, our representation has turned against us.

The ‘our’ and ‘we’ are probably the most controversial parts from the foregoing statements. Let’s address this for part one.

There is consensus among psychologists that two kinds of processing exist in the human mind, implicit and explicit. Implicit cognitive systems â€” developed earlier in our evolution â€” are unconscious, effortless, and fast. They are acquired either through biology (e.g., our natural sense of beauty or sexual attractiveness) or overlearning (e.g., multiplication tables). Overlearning can also happen from reading repeated news articles that reinforce a particular bias. The subcortical parts of the brain drive implicit processes.

Explicit systems, which evolved later, are conscious, controllable, limited by attention, and slower compared to implicit processes. They are acquired by culture and formal teaching. Implicit mechanisms can be over-ridden by more recently evolved explicit mechanisms. The capacity to hold attention on a task in working memory is an explicit process. (This same ability is also closely correlated to IQ, by the way.) Conscientiousness, another explicit process, is defined as the â€œability to control oneâ€™s behavior to conform to social conventions and to pursue long-term goals.â€ Another way of describing it is â€œeffortful control.â€

At the explicit level today, where once there were diverse cultures affirming many implicit collectives, we’ll instead find one virtual monoculture of political dominion whos purpose is to manage all the implicit collectives in order to make our modern society look like functions of its own accord.

It isn’t necessarily true that such a system is required in order to have a modern society. It is true that a modern society that also chooses a multiracial composition for itself must replace the idea of having many natural cultures with having one artificial managerial system that lacks a distinct implicit collective source of its own.

Back when every people had their own culture, individuals served as the means to their own type of socieites. So defined, human history is conservatism with pieces of liberalism peeking through the cracks here and there. In contrast, the replacement of cultures with one rootless, dominant political monoculture is an attempt to fit (force?) all sorts of disparate indivduals into a modern multiracial social construct.

We exchange our explicit ancestral legacies for a combination of having modern stuff and having lots of different people around us for amusement and novelty. Since they give up their distinct cultures to participate with us, we aren’t really even getting diversity in content – just in appearances. Their substantive content is just as shallow as our own: just another worker-consumer or happy-go-lucky welfare drone.

The culmination of our lifelong contributions, the New Right understands, is the perpetuation of this artificial monoculture that when convenient, represents our wants, which entirely takes the form of modern stuff we accumulate and sometimes keeps the various other implicit collectives from getting too aggressive with us.

This is where our politics steps in and why all modern politics thus far will fail our implicit requirements. Politics is only focused on bribing us with trinkets like less taxes or more security or more freedoms, but denies our constant implicit imperitives which encapsulate the whole of our existence itself rather than some select parts; the trinkets which themselves often serve as socially acceptable euphemisms for sticking with our own kind.

Politics for decades has served as a surrogate form of resource warfare between implicit collectives, The Silent War, but we only fight over allocation of shares of modern trinkets meant to appease us. The outcomes of these battles in modern time have had various labels describing the outer form. White privilege is one. Jewish supremacism is another. Welfare queens is yet another. Affirmative action, guest worker programs and immigration reform show the faces of other outcomes of trinket restriction or permission.

The managerial monoculture layer stifles our natural explicit flowering while encouraging the aforementioned politics to flourish in its place. There is a value assessment taking place today. What are we getting out of all this? This assessment takes center stage when the managerial layer is unable to meet everyone’s trinket expectations. There is the security threat of terrorism, checkpoints in public places, and gang violence.

There is the probability of higher costs but more job losses, an ongoing sluggish economy, and a diminishing social security return at the end of it all. There is common concern over what little the managerial layer has to offer, to whom it offers this appeasement and why. Health care reform controversy makes its appearance. There is contribution from below, but lack of representation from above.

The nervous parishioners were African-American, and the church’s newcomers were white. Sheppard says the experience demonstrated why racially integrated churches are difficult to create and even harder to sustain. Some blacks as well as whites prefer segregated Sundays, religious scholars and members of interracial churches say.

The terms Left and Right are confusing today because all managerial representation and many of the people are on a separate axis than what was conceived in the 19th Century when the terms were defined. We’ll find many of the people in each of the following updated political compass quadrants, but all active representation, with the exception of perhaps Ron Paul, falls on the Left side. 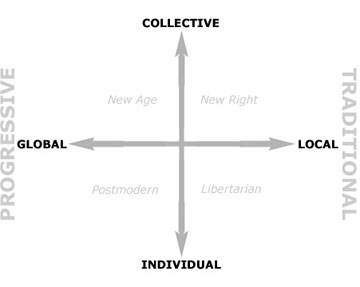 Here are the type of people who fall into these quadrants:

Global collectivists: the New Agers. Many of these follow the major religions of the world, including neopaganism. The New Agers also include non-religious secular humanists. To them, all people are one, but for all sorts of different reasons. Rather than an evolved implicit basis, the oneness idea is founded in some given external concept from various religious texts or from a modern political philosophy which asserts human oneness on ‘moral’ grounds.

Global individualists: the Globalists. Most of these are overachiever business people and politicians. To them, people and the surrounding world are a means to some end which is often primarily personal advancement in some form. If lots of subordinates or customers are better off, that’s probably fine too. Many of these may subscribe variously to some popular world religion or to secular humanism, but only as a public relations lifestyle accessory.

Local individualists: the Libertarians. These are the less grandiose business people and politicians. To them, the Left quadrants contain troublesome elements. The globalists threaten to dominate the Libertarian, who only wants to deal with life on a local scale and not bother others if uninvited. Also, founding an explicit collective would violate the sacred principles of individual freedom. The Libertarians understand they impede the grandiose aspirations of globalism, so they predict forthcoming and ongoing repression.

Local collectivists: the New Right. This is the only quadrant accepting the reality of an evolved implicit origin and all of the explicit effects that branch out from this natural source. To the New Right types, who have ethnonationalist people from all ethnic collectives, the other quadrants are dysfunctional to various degrees exactly because they have no legitimate, stable source foundation. The other foundations are rooted in the outer world where these sources are subject to corruption over time. However, there is only one way to corrupt a natural implicit collective, thus, charges of racism are hurled from the other three quadrants.