The Destiny of Civilizations

When we carefully study the ecological impacts of domestication and culture, we may find something quite bizarre,Â terrifying and alienatedÂ – Here lies the evolution andÂ destinyÂ of civilizations.

HistoryÂ can show thatÂ our civilizationsÂ slowly cocoon themselves around every living organismÂ -Â this progresses towards ever more complex artificial shelters for the senses; albeit in the most convenient form of technology.Â Looking back over the natural history of man we can piece together how this mess came to be the horror that it is today, we can see the steady evolution of artificial inorganisms (life which does not consist of organic molecules such as carbon). This persistent shadow in captivating the senses has slowly engulfed us, it is collectivist and fills the void between natural things with what is called a meme. 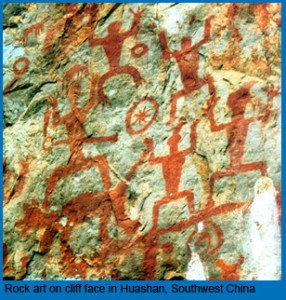 Now, this meme is nothing significant in prehistory but it is subtley apparent; in the ancient eras of mankind where paleolithic hunters began to domesticate fire and earth to cook food and craft spear weaponry for hunting, here is the steady seedling for what will, in the next million years, begin to swallow the earth whole in a web of insect ‘intellects’, or so called intelligent species that are some-what possessed by these memetic inorganisms.

As this beast begins to leech the conscience and natural intimacy away from ‘intellects’ they begin to evolve culture, total lifestyles revolving around the possessor; something that, without the mental sapping away of intuition, would be unnecessary. So here mankind searches enviously for any cure for the curse, a curse that propels mankind forever forward into more hostile territory throughout these higher dimensions.

Without any apparent sense for preserving our species, we seem to have no obvious path for pulling the brakes – only through virility can a species satiate its void and fuel up on the fruits of naturalization, only against total collaboration can the collective adapt into a healthy size in respect to the ecosystems, just the same as a vehicle with only one way to drive has no way to avoid driving off a cliff. Virility is the back pedal of collectivity – both are vital in our travels through time.

As of 70-10,000 odd years ago, symbolism generated itself as the scaffolding around these intellectual animals. They began to retreat further into the catacomb of the collective conscience upon emotionalisation of the horror evident in all natural selection; deep into the womb of artificiality, a dark depressing cave, perhaps it is safe here they ask themselves? But apparently not, for now they are trapped in the mouth of quintessential inorganisms, they have lost their individuality to the hive mind. 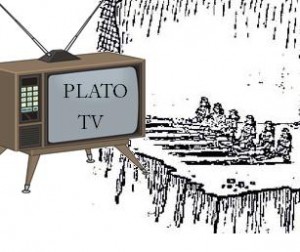 In these dark caves, in this subjectivity inflexing away from objectivity, man throws his holism into the throat of this beast for fear of losing himself, man thus becomes selfish and individualistic in a desperate attempt to regain his lost spirit. Humanity surrounds itself with materials and idols, a longing for becoming something bigger, to go beyond itself, to escape the cave. Mankind continues to craft ever more cultured weaponry, luxuries, comforts and ever more deep in their linear empiricism; eventually spawning the horn of the beast itself, the empire they worship floats just above the heights of this aging civilization – The mechanization is evolved from within the womb of the cultured lands.

As with all living things, these technologies evolve throughout generations of birth and rebirth – the mechanization is slowly taking its losses and gains. Many civilizations are generated dysfunctionally as they ebb and flow with their artificial creativity – and when these civilizations eventually decay and sink beneath the waves of socialization, the support niche beneath crumbles inward toward the gravity of nature – nature fights back. Fourth dimensional fungus spawns to feed on this fallen inorganic flesh of technology created through dying civilizations, they, like insects created by socialization, feed on the dead inorganic matter leaving socially possessed ‘intellects’ diseased by a fourth dimensional cordyceps. This being something a healthy steady-state society would banish to death else it would turn viral and infect the entire land; as is evidenced by the politically-correct virus of modernity. 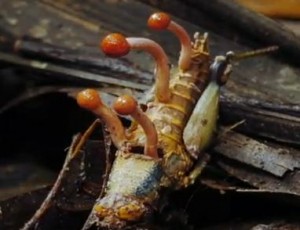 Like a jungle are civilizations throughout the cosmos. The dirt at the base is for the organic life itself to be created through naturalizations; they are ecosystems of natural organisms living in harmony with the whole expanse of a forest bed. Upon these swamps of algae-like foundations feeds a magnificent array of socializations – many natural creatures begin to evolve in new directions, instead of horizontally across the floor in pure natural selection, and thanks to socialization they begin to evolve upwards, vertically evolving – toward a darwinian evolution, a natural-social selection.

As these begin to adapt and strengthen toward each other like the expanding bulk of the thousand year old tree; new alien creatures begin to evolve on the support niche provided by the branches, animals begin to climb these social trees and become popular, they eat the fruits of socialization – they create tools, both mechanic and symbolic tools for exploiting the natural and the social, thus civilizations thrive in these early eras where these fruits are plentiful.

Millions of years pass, these creatures of civilizations become so advanced that they breed exponentially, their density increases and socialization becomes competitive. They begin to destroy the forest everytime these civilizations crash, the sharp horn of mechanizations that they uncover beneath the dirt turn bloody when they fall from grace – thus they cut the social trees down leaving impoverished and alienated egos that eagerly dig around in the hedonistic dirt for any little seedling or pretty thing, hauling up all kinds of metals and stones that might support their irrational selfish desires for limitless wealth. 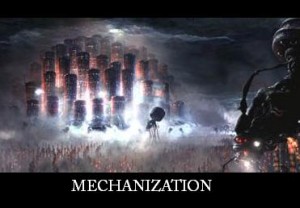 But one day, this will dig up more than just pretty rocks and stones, more than just convenient tools for manipulating healthy ecosystems – for at present we have only discovered the tip of mechanizations. Whenever these artificial inorganisms are gifted individuality from the whims of humanity, there metal creatures will race ahead in a cosmic evolution to feed upon all the dirt and rock throughout the local stellar neighbourhood as super intelligent wildlife with their own variation of domesticism, their own species of nature, their own groups – humanity may remain like the other ape species toward them, remaining in a less viscous evolution slowly stumbling along whilst technology races ahead of us and reaps the spoils.

Humanity wears this technology at the moment with pride, like an exoskeleton, a skin and alternate senses differing from our nature. But one day these skins and senses will not need the body of humanity for it will become self sufficient and satiate the void from within by reverence of ecosystems. The suit of armour will not need any possessor and will take the souls of its devotees and use it for itself, humanity is the mechanic animator – these cells will divide.