Why I don’t give to charity 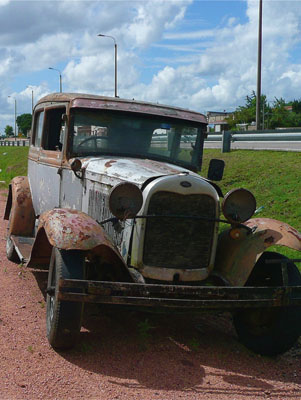 There are some that claim the holding-up of one’s own experiences, as examples, is a boring, egotistical thing to do, and that only repeating learned quotes from well-known sources, is a valid form of writing. I do not agree with this view, since anything, from anywhere, can never be known with certainty to be truth, and is only ever a matter of preference as to what one chooses to believe. I choose to believe the evidence of my eyes, my ears, and my experience, first-hand, to draw from whatever conclusions at which I may arrive.

And, so, to my story, from the fertile ground of a life uncommonly well-lived…

There was a woman: an ugly, fat hag, who was rather poverty-stricken, and doubtless needy.

Her beat-up old car had broken down, and now was impounded by the tow-truck driver, pending payment for his services. She could not afford his fee, and, also, had great difficulty walking, in a location which ensured the necessity of a car for her to get about in.

I knew a little about her, and seeing her obvious need, decided to assist. The towing fee was no great sum, to me, and so I volunteered to pay it, on her behalf, so that she would again be mobile. This, I thought, would be helpful to her.

The tow-truck driver duly delivered the sorry vehicle to her location, and parked it there, but, alas, it still would not run, because it lacked gas. Which was why it had needed to be towed in the first place. Again, I made off to the local co-op, jerry-can in hand, and filled it with enough gas to get to the station for more. Whereupon I discovered, that even though the vehicle would run, she would be unable to drive it, because it was uninsured. Her coverage had lapsed, some time before, and she had never renewed it.

Unwilling to let this thing rest, after so much invested into it, I drove her to the insurance broker, to buy her insurance, so that she might resume her automated life, only to find an outstanding debt, that first would have to be cleared, before current insurance could be bought.

A few hundred dollars later, she was set to go, and very pleased about all of this. At which point our story takes a brief intermission, while I resumed my own life…

The next time I saw her, she was, again, lumbering painfully about, on foot, her vehicle not in evidence. When I enquired as to the whereabouts of the vehicle, into which I had poured considerable of my own resources, she informed me she had sold it, for enough money to pay her rent. At which point I began to feel twinges of regret, for ever having become a part of any of this.

But by and by, I paid off the new buyer, who hadn’t actually paid anything, yet, but merely said he would, before rent-day came due, and returned the decrepit vehicle to its rightful owner. Who again, could not drive it, because the gas tank was almost dry.

I handed over a further sum, to enable her to half-fill her empty tank, and made off, once more, to resume my own life.

When next I saw her, hobbling along, slowly, on foot, I stopped to enquire as to why she was walking. Did the car not run, again?

“No, no,” she replied. She had run out of the gas that half of what I had given her had bought, and with the other half, she had bought a birthday gift, for her son.

Fine. Well, not really. I suddenly saw this saga running off into the distance, with me financing a hole that was never going to be filled, no matter how much I funded its filling.

Here I was, now not only funding her own non-functional life, but her son’s, too.

And so I decided to inform her that this relationship would, henceforth, be terminated.

Which I did, and at which she became very angry.

In fact, we have never spoken, since.

Odd, no? That all the funding I supplied her with, should be instantly not only forgotten, but replaced by a seething resentment at its removal. As if it had never happened.

The moral of this story?

Well, there really isn’t one.

It is rather a non-story, based upon real events surrounding a non-person with a non-life.

There is actually no way anyone can ‘help’ anybody like this, no matter how well-intentioned one is, and no matter how much cabbage is tossed in, by way of ‘helping’.

So do I give to charity? No. I don’t. I help things that can actually benefit from my assistance, and humans, unfortunately, are generally not among them.

I’ll walk more than that extra mile, for a forest, and all that it shelters, beneath its nurturing canopy. I’ll do what I can, whenever I can, for anything that doesn’t expect, or demand it.

I deal with moments. As they arrive. Each one known only as ‘now’.

Each one, as they arrive: the only moment that can ever actually be lived.