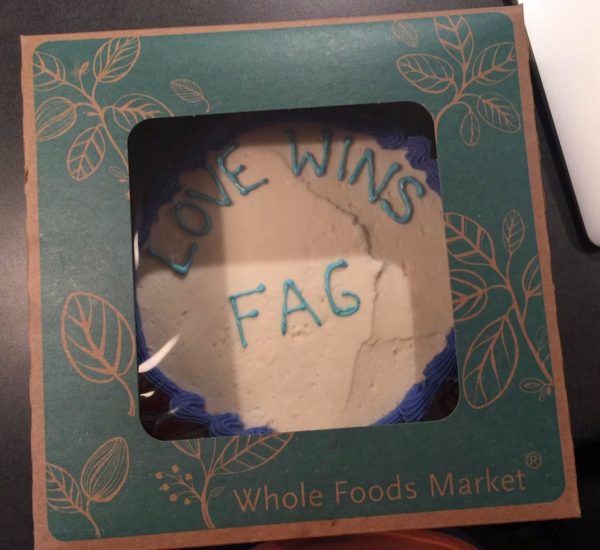 Austin, TX pastor Jordan D. Brown has taken on Whole Foods, and Whole Foods has spanked him back to the playroom. Brown posted a picture of a cake on which was written in colored frosting “Love Wins Fag.” He then took to Twitter to, in classic Leftist fashion, rally the troops for a Two Minutes Hate.

Instead of being cucked, Whole Foods Markets took action. They talked to the employees involved, and issued a rebuttal which laid Brown to waste:

Our team member wrote â€œLove Winsâ€ at the top of the cake as requested by the guest, and thatâ€™s exactly how the cake was packaged and sold at the store. Our team members do not accept or design bakery orders that include language or images that are offensive. Whole Foods Market has a zero-tolerance policy for discrimination. We stand behind our bakery team member, who is part of the LGBTQ community, and the additional team members from the store, who confirmed the cake was decorated with only the message â€œLove Wins.â€

As usual, SJW incidents are fabricated in an attempt to capture that easy media attention and notoriety that has made SJWs powerful over the years. In the past, employees would have been fired within minutes; now, the SJW is on his way to getting fired. Good work by Whole Foods Markets in not getting cucked and fighting back with truth.

After a deeper investigation of Mr. Brownâ€™s claim, we believe his accusations are fraudulent and we intend to take legal action against both Mr. Brown and his attorney. Hereâ€™s what we know:

While Whole Foods is giving lip service to SJWs, they are also showing how to handle SJWs: do not treat them like harmless internet pranksters, but the reputation vandals that they are, and force them to face consequences for their actions.

American business has suffered under the SJW extortion racket for too long. An insult is imagined or hyped out of nothing. The company must cuck, apologize, hire SJWs, pay for SJWs to teach diversity classes, and take a hit to its stock price. With Whole Foods’ response above, the turnaround has begun. SJW like world liberalism is in decline.