Who Was Responsible for the Capitol Riot Disaster? 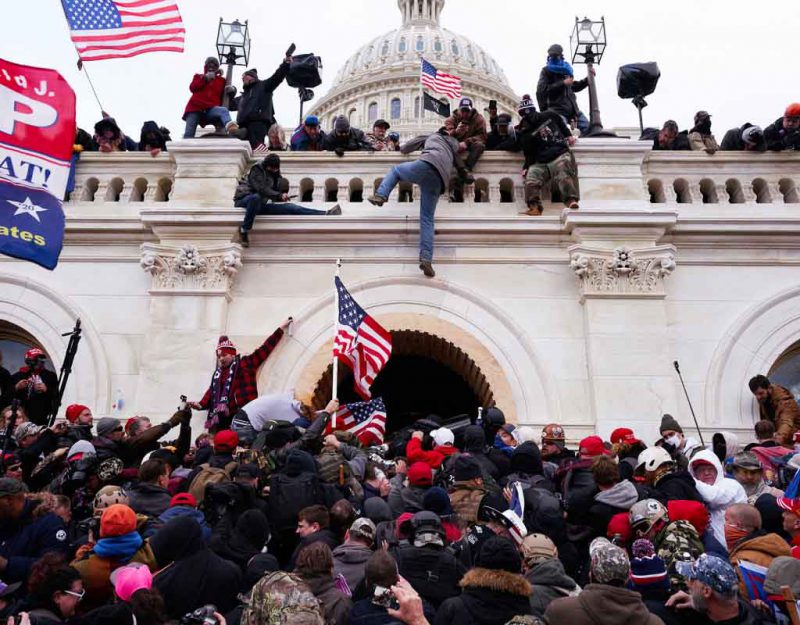 Signal events follow touchstone events, themselves an expression of underlying causes. While the signal event of the Third American Revolution may have been the riot at the Capitol, the touchstone event — the real collapse of American democracy — was the election theft at 3:00 AM on November fourth.

We know now that the Capitol riot was not provoked by Donald Trump; it started while his supporters were still on their way to peacefully protest at the Capitol. We have no idea who was involved, since by the nature of chaotic protests, anyone off the street could show up.

A great number of MAGA hats, American flags, and other Right-wing paraphernalia were present at the protest, but so were many people in anonymous clothing. They could be Antifa, BLM, Chinese agents, out-of-work mobsters, or just people who like to fight and vandalize.

Then we must face the question of the security failure that allowed this event to occur. How does the capitol building of the most powerful nation on Earth fail to protect itself? The answer may lie in a version of “who counts the votes,” namely “who manages security,” which in this case is Democrats:

Sen. Lindsey Graham suggested he would investigate House Speaker Nancy Pelosi’s handling of security of the Capitol building after rioters stormed it on Jan. 6.

“I understand what happened on January the 6th was one of the low points in my time in office,” the South Carolina Republican said on Sunday Morning Futures. “It was horrendous to see people … take over the Capitol, the House, and the Senate, beat officers, defile the seat of government. How in the hell could that happen? Where was Nancy Pelosi? It’s her job to provide Capitol security. We will get to the bottom of that.”

The sergeant at arms of the House is under the direction of Pelosi and is responsible for securing the Capitol along with the Capitol Police.

It turns out that the Capitol police are also controlled by Democrats in Congress, and they apparently have no idea what went wrong:

Questions over the force’s handling of the siege have since intensified amid repeated claims that it had warnings of planned violence — yet turned down help from both the FBI and National Guard.

However, because the Capitol Police is technically part of Congress, it is exempt from the Freedom of Information Act, the usual route for digging into steps taken by a police force, Fox News noted.

Instead, the force falls under the oversight of the Committee on House Administration, whose chair is Rep. Zoe Lofgren (D-Calif.).

Once you realize that Democrats had advance warning of the potential riot, Democrats controlled security, and Democrats were responsible for the police force, this looks more like a Reichstag Fire event. Someone let this happen:

The officers who spoke to the AP said they were given next to no warning by leadership on the morning of Jan. 6 about what would become a growing force of thousands of rioters, many better armed than the officers themselves were. And once the riot began, they were given no instructions by the department’s leaders on how to stop the mob or rescue lawmakers who had barricaded themselves inside. There were only enough officers for a routine day.

To stage one of those, just use your informants or social media contacts to assemble as many known criminals and rioters as possible, and then have someone in the crowd give the signal to attack. Then you can blame Trump for the riot that you instigated, and use that to impeach him.

Why would they want to impeach Trump, since he is (in theory) out of office in just a few days? Obviously they fear what he might do with his time in the White House. He has been busily declassifying documents, appointing staff, and making policy, not at all like someone who is leaving.

How can he do that, we might ask, since the courts have denied him, Congress failed him, and massive public censorship muted him. One answer might be that more devastating leaks are coming, after which no one in the country will have faith in a Biden administration.

He is already very close, since most Americans think American democracy has failed:

Of potential threats to their way of life — from foreign adversaries to economic forces to natural disasters — Americans today say the biggest threat comes from inside the country, from “other people in America, and domestic enemies.”

After the attacks, the rhetoric and attempts to overturn electoral votes, here’s how Americans describe democracy and rule of law in the U.S. today: just 6% think it “very secure” and just 29% think it’s at least somewhat secure at all. The rest see it threatened.

This means that we are a fallen nation, and we fell on November fourth at 3:00 AM when someone decided to reverse a vote count with the addition of many magical votes from the Venezuelan voting machines, the Chinese SolarWinds hack, and possibly European allies interfering in our election process.

The world is on fire because of the failure of liberal governance. Italy is rebelling against COVID-19 lockdowns, France still smolders with unrest, and economies are imploding across the globe. Do they want to keep us locked down so that we cannot see and protest the collapse of our civilization?

It turns out that we have been in visible decline for a long time, as belief in American stability falls:

Over the past decade, many countries have become less fragile. The U.S., on the other hand, has become less stable. Indeed, the country is among 20 states that have seen the highest percent increase in relative fragility over the past 10 years—a list that includes Syria, Venezuela, and the United Kingdom.

Though the U.S. is stable according to some of the index’s economic, political, and social measurements, it has seen a stark drop in what the index labels as cohesion, an indicator that reflects internal divisions. Given the pandemic, recession, protests, and political turmoil, the 2020 score, which hasn’t been calculated yet, will likely drop further.

Did Trump do this? Unlikely: things have been bad since the Clinton years, at least, or Carter years if we skip over the Reagan era. Go far back enough, and you see a country out of control since just a few years after the Korean War, as if it had been subverted or had social trust dissolve entirely.

The final blow will like be this fraudulent election, which has shown Americans that their country no longer has unity, but instead has become a battleground between larcenous forces. If it seems like the thieves have won, no one believes in the future:

The leadership of the Democratic Party, its allied media, and the Bush-Romney wing of the Republican Party decided to play dirty to expunge an obstreperous, incalculable outsider from the political system. And in doing so, this combination, America’s establishment, destroyed public trust in the Congress and the media. It’s no surprise that two out of five Americans now believe that a vast conspiracy rigged the 2020 presidential elections.

Trump, like Reagan and Nixon before him, represented an attempt to stop the decline. If you leave it up to public opinion, We The People will choose death, every time. They do it to ensure that they stay within fashionable opinion, and since groups always want less oversight, this means more liberalization and less order.

Not surprisingly, we see the early signs of tyranny. The group of people who run our government behind the scenes decided that they had to take out Trump, since he was interrupting their process of assuming total control. This is why we see an outbreak of censorship:

They emulate China because they work for China. Bribes are cheaper than battleships. A clever enemy will employ them to, like mines dug under our defensive walls, subvert our defenses. They will then seek to make anyone speaking sanity a pariah, and ostracize any who want to end the decay.

Most will go along with them. Social conformity destroys societies through class warfare. Once people realize that they are no longer immediately threatened by nature, they agree in a group on individualism, or everyone doing whatever they want, with no consequences, and with subsidies.

That path leads to Communism, but every individualist wants to seem to be unique and brave, so individuals take great delight in giving the finger to heritage, tradition, common sense, logic, and history. They draw attention to themselves by endorsing the big bad of Communism.

Trump has played this one well. He allowed everyone enough leeway to reveal themselves, and then he pressured them so that the mask came off. The Democrats turned into snarling, White-hating Communists; the government bureaucrats proved not to be meek public servants, but vampiric leeches.

I suggest that we pay attention to the latest Democrat freakout, namely their fear of outside oversight of the NSA:

In the letter, the Speaker wrote, “Public reporting indicates that Mr. Ellis, a relatively recent law school graduate with a limited resume, was selected due to interference by the White House, and was chosen over much more qualified candidates. Moreover, Mr. Ellis has been reportedly involved in highly questionable activities that are disqualifying – including the infamous 2017 ‘midnight run’ to launder intelligence information through Rep. Devin Nunes and with efforts to shield information about President Trump’s July 2019 call with the President of Ukraine.”

They wanted an insider. They did not want someone critical of what is going on there. Under Obama, the NSA became a massive force in American politics since it allowed him to spy on anyone that he wanted to and use that information for his advantage. No wonder he always won.

That agency now, and others like it, are most likely working for the cabal that runs Washington, including the billionaires who want it to do what China wants because they believe their future market is in China and not here.

Remember how a decade ago, it was agreed that Hispanics were the new hope for our consumer industry? Everyone in business scurried to make Hispanic-friendly ads, and then… as usual with scapegoats and white knight hopes, the market never materialized.

The same is true of China. No one realizes it after these economic reports, but China cooks the books. In actuality, they are broke and desperate because their system is not working. Like the French Revolution and Bolshevik Revolution, it is failing to feed its people and provide sane, normal life.

If we are lucky, Trump will stop this election theft and restore us toward at least stability. Obviously, changes need to happen to America and American democracy, including perhaps exiling a lot of Leftists to Venezuela. But first, we need to recapture ourselves.