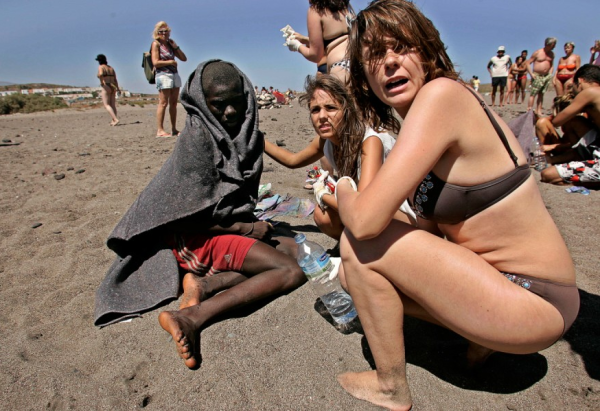 Currently in Europe, we are witnessing a flood of refugees. It’s hard not to sympathize with the refugees, as they flee the damages created by naïve Western liberal policies. Many of those same liberals demand of us Europeans to allow millions upon millions of these refugees into our countries.

What would happen to Africa? The 10% of people who flee Africa would in all likelihood be the smartest ten percent of the nation. They would be the most secular oriented people, the least superstitious, the wealthiest, the best educated, the most innovative share of the population. Europe on the other hand, would be faced with the struggle of assimilating an ever growing minority of the population, who live in segregated neighborhoods where they hardly ever meet any Europeans.

Leftism is an outgrowth of Christianity, maintaining its values, without its faith in God. Ultimately, leftists don’t want to end suffering, they want to be seen addressing it, so that they are seen as good people. Mother Theresa used to say that suffering brings the poor closer to Jesus. Similarly, importing immigrants delivers you an opportunity to spend your whole life addressing an endless deluge of pointless suffering. If we recognize the Christian cultural values that govern our policies as a continent, we recognize how we arrived at our suicidal and unproductive policies.

Conservatives respond to this stupidity, by feigning autism. Intelligent right-wing men try to blend into the crowd of libertarian/conservative Joe Sixpacks and proclaim that they couldn’t care less if some young girl is gang-raped by the local village brutes or some particular African country just entered the genocide season again this week, because they fear that humanizing the third world inevitably leads to our governments pouring its population out over our own nations.

Thus the right wing response to the endless list of atrocities splattered on our newspapers on a daily basis is to claim that this is “not our responsibility”. I don’t think this is a very legitimate point to make. Besides the fact that humans are very bad at feigning autism for very long, it’s hard to defend the suggestion that we have no responsibility in regards to Africa whatsoever.

Besides the fact that these were our colonies for centuries, nations we used to fuel our industrialization and win world wars, our intervention never really stopped, decolonization just made our interventions more damaging. Now we were earning money selling technology to nations that were not ready to cope with its consequences.

We find nations with fertility rates of eight children per woman and forests turned into deserts thanks to agricultural practices we introduced to them. Rates of soil erosion in Africa have increased twenty fold between 1974 and 2004, according to the Worldwatch institute. Free market capitalism allows our companies to continue operating in Africa, but without any sort of ethical oversight, thus turning their presence there into a limbo dance of tax dodging, estimated to cost some nations up to 13% of their GDP.

So what would be a rational yet compassionate response to the seemingly endless catastrophe? First we have to ask ourselves what makes Europe so attractive in the first place Africans don’t come to Europe because of the weather. Like it or not, they come to Europe, because Europe is full of white people.

If the average African knew what Argentine, Australia, Canada or any other nation full of white people looks like, they would be more than happy to move there too if given the opportunity. Most however, are only familiar with England, seen as the paradise worth traversing the Sahara desert and the Mediterranean sea for.

The yearning for white people doesn’t stop as soon as they are in Europe. Children in Dutch multicultural schools demonstrate in the streets, asking for more white kids to attend their school. As these children grow up, they may flee to Tumblr, where they will proclaim that they “do not need a white savior” along the lines of Rachel Dolezal, but every action taken and every policy endorsed demonstrates the opposite, a desire to have white people around.

Now, the idea that has to be considered here is that rather than inviting Africans to enter a Darwinian triathlon, where most people drown, suffocate or starve, while the toughest make it to Europe and win the privilege of getting to live as a perpetual underclass in a majority-white society, why not try the opposite? Why not encourage white people to migrate to Africa instead?

Sending young people to Africa would be a blessing for Europe too. All the type of people stirring up trouble now by sheltering illegal immigrants, calling people racists and Islamophobes and attempting to restrict free speech would have something better to do with their days. Europe would have a decisive majority again, of people who want to preserve Europe’s original cultural identity.

White people in Southern Europe are dealing with youth unemployment rates of anywhere around fifty percent. These young people spend their days stacking degrees on top of each other and moving from internship to internship, learning irrelevant information in the hope of one day finding a real job. In Africa, simply knowing how to use birth control can be a valuable skill. If the average IQ in an African country is 85, an estimate higher than most studies even by left wing academics suggest, with a standard deviation of 15, any white immigrant with an IQ above 115 would be smarter than 97.5% of the local population.

In the long run, such policies would also save us money. Instead of paying for our citizens’ endless educational expenses and unemployment benefits, they engage in productive activities abroad. We could stop patrolling the Mediterranean sea and avoid growing influxes of immigrants in our home countries. The demographic that votes for left-wing open border parties voluntarily leaves our continent.

There is a valid argument coming from the fringes of the political spectrum, that Africa does not per definition benefit from “development”. This depends of course on what kind of African we speak of. Is an Aka pygmy living in the rainforest of Congo, where he climbs in trees to gather honey and uses bow and arrow to hunt for animals, better off working in a call center? Obviously not. It shouldn’t be incredibly hard to make a drug addicted orphan on the streets of Monrovia better off however.

We have no obligation to assimilate every single African into a Western lifestyle. We merely have to guide the process of development into a trajectory that is least destructive, based on the lessons we learned during our own industrialization. Currently, the process of industrialization in Africa is leading to rampant deforestation and the genocide and displacement of primitive societies. Nigeria lost half of its remaining forest between 2000 and 2005, African elephants are expected to go extinct within a decade. Clearly, doing nothing isn’t working. It should certainly be possible for us to reign in the worst outgrowths, that both opponents and proponents of development can agree should be avoided.

For Africa to have a future, Europe needs to have a future. This requires Europe to develop a sense of self-respect again. Our history books and our movies will happily discuss slavery, but nobody is interested in hearing how the British empire fought wars in Africa to bring an end to slavery, as it doesn’t fit into our mood du jour of self-flagellation. Then, when our people return to a state of sanity, us fortunate few can finally share the fruit we harvested from the tree of knowledge, without injuring its roots.

Beyond Clueless (2014) | Time to end the “hate crime” designation