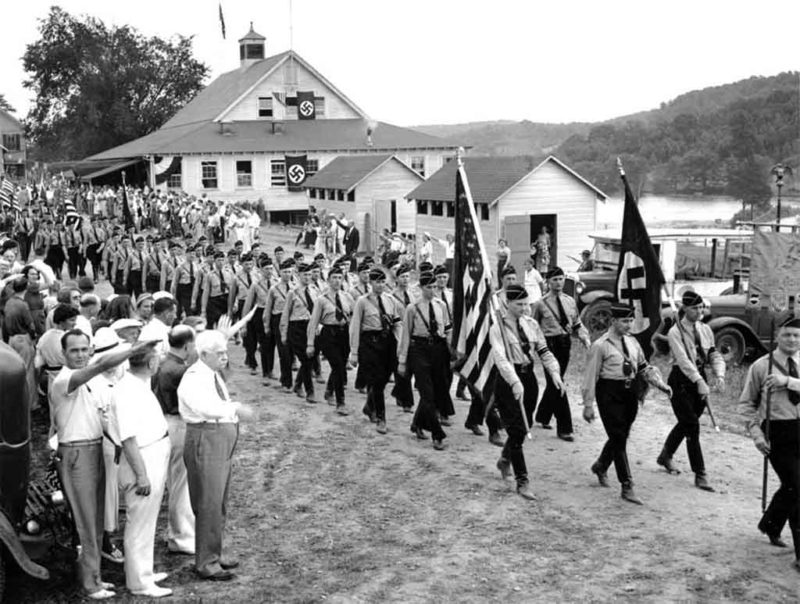 I was pulling up to a stoplight where a homeless fellow — that is the catch-all politically correct term for the group that encompasses beggars, winos, and the ambulant insane — was walking toward the intersection.

Naturally this circumstance provokes mild revulsion because the homeless inevitably ask for money, and while I would hand it over in my younger years, mature knowledge tells that most are looking for beer money, and people like to hand it over for their brief high of feeling virtuous that comes from realizing you have what they do not.

“Not today,” I said genially.

He looked around, then turned his gaze back to me. “You know, it’s weird,” he said. “My own race — white people — won’t even give me a quarter.”

“Sure seems that way,” I responded, and since the light was green, drove off.

White Nationalism died for the same reason I drove off. White people do not want to be roped into another parasitic arrangement, and when they hear “white nationalism,” they think of something that will force them to support white people regardless of quality.

In their minds, white nationalism is sort of like a union for white people. The thought goes that if whites need preserving, then we should preserve all whites, which goes against what most white people want. We want the weaker whites to die out so that our race and its ethnic groups are stronger.

We can add this to the list of problems with white nationalism:

White Nationalism died because it could not overcome these problems and has been replaced by the Alt Right, which has distanced itself from the Stormfront audience because it sees them as addicted to the old way of doing things. The Alt Right is not an organization, but a generalized social movement to demand a restoration of Western Civilization.

This gets us beyond a fixation on race, includes the need to renovate all other areas of our society and stop our ongoing ecocide, and shows us a way forward that moves by small steps and not apocalyptic jagged edges. It states a goal, instead of a method, and does not take away our class structures upon which we depend for promotion of the more competent to leadership positions.

On top of this, two other events doomed white nationalism.

First, it became mainstreamed, thankfully not as pro-white but as criticism of diversity, generally. As a pioneer in this argument, having written and discussed it from the early 1990s through the present, I find this one most gratifying. We are recognizing that diversity is bad policy and nationalism is good policy.

This enables us to stop scapegoating other races and instead to focus on what makes a nationalist society superior. National unity means everyone moving in the same direction, having roughly the same abilities because they share very similar genetics, and the ability to have cultural values and national customs take the place of government, the nanny state, and our police forces in many instances.

We do not want to manage and control others as Leftists do, but have a society with certain habits and values that rewards those and bumps everyone else to the side. This allows us to set standards without having to stamp everyone with a mold that forces them to behave identically, and allows us to be flexible.

These same things made us weak to Leftism because they are more complex and therefore will not satisfy an angry mob. However, that weakness is the result of us being successful and breeding too many lower-echelon people, not a failure of society as it was then designed. This will require awareness in the future but not much more.

Second, it became irrelevant. The Left championed identity politics as a means to an end. They wanted to displace the traditional founding group in America, Western Europeans. However, as soon as the balance tipped and whites saw a future in which they were a minority, they demanded the right to have identity politics as well.

This created a movement that superseded white nationalism. Why carry all of the baggage when you can simply be in favor of identity politics for all groups instead of merely minority groups? This enables people to argue for simple, gradual changes of a Right-wing nature to get us back to our social conservative roots.

History has moved on because Leftism failed. It promised an end to racial guilt and enmity and delivered more of the same. You cannot fail worse, really, than making the problem you claim to cure even more virulent. Whatever white nationalism had to offer has been taken over by more competent hands, avoiding what kept people out of it.

Unfortunately white nationalism lives on and, following its Leftist roots, serves as a parasite. Any time nationalism threatens to get off the ground, in come the white nationalists determined to bungle everything and revert us to a mentality of Leftist-style organized groups shouting ideological rhetoric at a terrified audience.

Like the beggar at the stoplight, white nationalism rules by guilt, as all ideologies do. They demand that we do something or consider ourselves selfish, mean, and uncultured. In reality, the ideology is a gross oversimplification, which means that it obscures the actuality of the world around us and makes us weaker.

This correlates to how tolerating beggars, perverts, sociopaths, fools, and other weak people among our own tribes makes those tribes weaker, although if you ask the white nationalists, we should do it because “if it’s white, it’s right.”

Parasites always win in human society because normal people try to be nice. This allows the parasite to take over, and by the point where this becomes clear, the only actions possible to counteract it are extreme and thus unsociable. The parasite wins. In human society, the weak eat the strong.

Nice people fear their neighbors because — since they have no kings to protect them — if the neighbors become offended, a lynch mob forms and nice people get destroyed. The problem is not that we are nice, but that niceness alone is not a plan, just like free markets or nationalism alone are not a workable complete solution.

We have been handing over the bucks to support parasites for years, and the parasites end up rich and everyone else ends up both poor and overworked. That is the cycle we must escape, and since white nationalism cannot do this, it has died, and been replaced with both the Alt Right and a revitalized Right that recognizes genetics as the root of culture.