What white people misunderstand about Ferguson 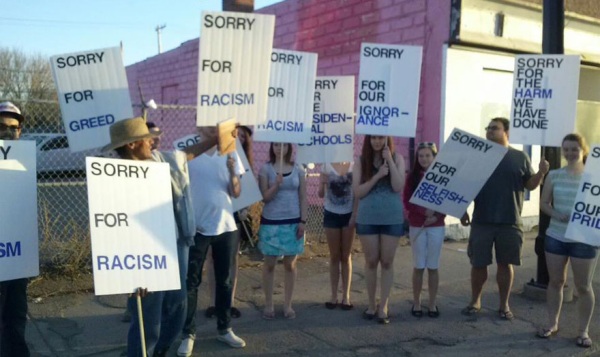 They are destroying people’s careers for speech again and it should make all of us ill, even if we think the speech is reprehensible.

A Texas teacher has been suspended for racist tweets. Plot twist: she is African-American and the tweets were potentially anti-Caucasian.

“Who the (expletive) made you dumb (expletive) crackers think I give a squat (expletive) about your opinions. #Ferguson Kill yourselves,” read one of the messages.

While some may celebrate the fact that someone other than a white person got fired for perceived racism, we should remember that two wrongs do not make a right. Which brings us to Ferguson, where a great wrong is anticipated to occur when riots are presumed to break out after officer Darren Wilson is not indicted for murder.

Ferguson represents a tough situation that few understand. It would be a travesty to indict Wilson, who did nothing wrong, just as it would be illogical to treat Mike Brown — halfway through his second felony of the day when he got shot — as an innocent. But this misses the point. Ferguson is not the cause, it is the effect.

When a situation gets to the point where Ferguson was the day Mike Brown got shot, the problem runs deeper than whatever incident breaks out. Like Rodney King in Los Angeles, or Emmett Till, Mike Brown is a symbol. Ferguson is not about who Mike Brown was or was not. It is not even about injustice. It is about a question of identity.

The event is just a way to talk about it that everyone can understand. (This is what I call the “democratic fallacy.” The issues that define an election are not the most important ones, but the most easily understood ones.)

Ferguson hides an issue as old as America and as complex and troublesome as one might imagine. This is the question of whether we can forge a nation out of anything other than shared heritage, culture and values. We know that works because it has been the default order throughout history.

America formed itself around a different idea, the “proposition nation” where what held us together was the political order we held in common. At first, this was limited to white people. Then it expanded to include near-whites and then other races. Soon all that we had in common was a political orientation and the talk about “freedom” that seems a political necessity in the USA.

In a social order, your group is either the norm or the exception to the norm. If your group is the exception, you are either in power and in command of your destiny, or not. As a minority group, you can either play along with the majority and loathe yourself for being essentially a conquered tribe, or you can resist and have a sense of identity and pride, but lose at the game of success.

African-Americans receive endless pity from white people. They give them welfare, put them at the forefront of media, and write laws to give them preference in hiring, renting, government contracts and renting. And yet they cannot give African-Americans what they need, which is a sense of command of their own future, their own standards and their own communities.

Even the first (half) African president ends up failing on these fronts. He is in charge of the system, sure, but it is the white man’s system. He can give more gifts and hire more African-Americans, but they are forced to make rules for a society of multiple groups. This means that there is never an identity and rule for African-Americans alone.

Every group needs command of its own destiny, leadership of its own and an identity specific to it. It needs its own communities, rules and role models. This cannot happen in a mixed-ethnic society. The perceived injustices in Ferguson are a flash point, but not the underlying issue. The underlying issue is that diversity itself marginalizes African-Americans, and that this is injustice.

No one can be better than me | Merry December 25th holiday, Citizen!