What Africa can learn from the West 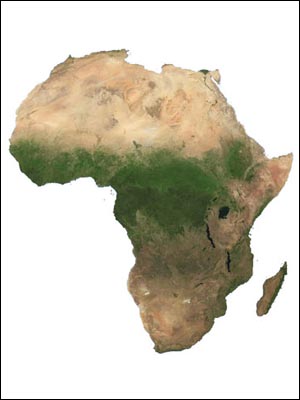 No one likes to see the dismal living conditions of the dark continent. Apart from Australia, Africa has the lowest population density, the most mineral resources, and the most fertile soil of any continent and two-thirds of the world’s potential hydro-electric power.

But sub-Saharan Africa has three all but insurmountable problems: Islam and other pagan cults, socialism and an average IQ of 70. All three have a common origin which is the cause of Africa’s third world-status. In other words, the solution to any one of these problems is the solution to all of them.

Low IQ correlates not only to low income but also to just about every social problem known.Â This is a lower IQ than any measured outside the continent, bar only the Australian aboriginals. Fortunately, while genetics do not change in an individual, they can change for a population.Â  All that is needed for a population to raise its average IQ is for the more intelligent people to have more children then the less intelligent.

Thus the more intelligent men will father more children then the less intelligent men. Their offspring will be not only more numerous and more intelligent but also more fertile and so the effect is multiplied giving you a steadily rising IQ for each new generation. If ether ingredient — monogamy or private property — is not present this effect can be ameliorated or even reversed.

If rather than monogamy, we have promiscuity, what will result? Imagine 10 men and 10 women fornicating with one another randomly. The genes selected for the next generation will simply be fertility, not intellect. Or take polygamy as the dominant social arrangement. If you also have a more or less private property regime, we can imagine the smartest men becoming the wealthiest and then snatching up all the women.

At first this will give a positive effect, but over the long run, the population becomes inbred. Take the most extreme example, that of one man marrying all the women. The next generation would be entirely half siblings. The generation after that would have fathers for uncles and aunts for mothers.Â And in the mean time, we get a large population of restless men.

What would the outcome be under a Socialist regime? Even if that society has monogamy, wealth will not correspond to income and thus women will have to select on some other basis. Empirically, we observe this tends to be violence and impulsiveness in such societies. This in turn will tear away at monogamy. The very fact that a woman does not need a man to support her children will also tend to deteriorate monogamy.

Even without total socialism, every little bit hurts. In the west, the income tax is about one third to one half. This is roughly the fraction of the family income a wife tends to earn on average. This means the couple could enjoy the same disposable income if she stayed home and there was no income tax. In contrary, under socialism the higher taxes cause women in higher income families to work outside the home more than they otherwise would, and presumably have fewer children.

On the other extreme, a socialist state pays the poorest and least intelligent women in proportion to how many children they have. This causes an incentive for them to have more children and to work less, being even poorer. The effect of all this is to put a downward pressure on average IQ as we lower the birthrates of the smartest and increase the birthrates of our dimmest.

In light of this analysis, what effects can we expect from our efforts to help the dark continent? One of the most popular charities (and like all things Africa-related, we spend billions on this) is birth control and abortion. The argument runs that there are too many people in Africa in proportion to the amount of food and thus, there is starvation. Therefore, we ought reduce the population.

However, there are a few problems. First, farming can be made more efficient. That does however require smarter people. Birth control makes it easier to avoid having children but it can still fail if one is not careful. It will be the dimmer people who still wind up having children by mistake. Thus the effect of birth control will be to lower the entire population’s birthrate but also, to lower the average IQ.

While abortion seems like a solution, it does not fix the problem. Because it can be done after the fact, it will not disproportionately lower the birth rates of the intelligent. However, it makes monogamy less attractive by making sex easier. This will cause a breakdown of monogamy among them and thus create a long term downward pressure on IQ. Rewarding child bearing, ironically, has the same effect because rewards are invariably denominated in money, which entices the poor more, also producing downward pressure on IQ.

First we must understand that most of the nations of Africa have very small populations. Only four have over 20 million. This means for them to have much of a living standard, they must import. They have three ways of getting the foreign currency it needs to use for imports: export and foreign private investment, immigration and remittances, and foreign aid.

Immigration is ultimately destructive because, as the poorer party in most exchanges, Africa tends to lose its most intelligent people, who can afford plane tickets out. An African with an IQ of 85 is a standard deviation below the Western average but a standard deviation above the sub-Saharan African average. If he comes here, the average IQ of both nations falls; he may have been a lawyer in Nigeria, but in the US, he drives a cab.

The remittances he sends home will increase his family’s buying power, but he produces nothing for the country. More consumption and less production produces higher prices, so if enough people emigrate and remit, they will deflate the nation’s economy.

Trade is the only potential option. If we embarked on a policy of free trade no aid with africa, people in Africa would exchange their labor or resources for foreign currency. These exporters would be independent of the state, which would force a private property regime.

A need for respectable business would pry the population away from the fanatical governments, and cause them to abandon Islam, paganism or the African-initiated churches towards more western introduced orthodox christian sects. This would in turn bring about both monogamy and private property and thus long term average IQ increases.

As we can see, in theory we can do something about the plight of Africa: raise its IQ, reject the anti-civilization cults and socialism making it dysfunctional. The remedy is free trade, an end to foreign aid, a stiff ban on immigration and as many Christian and Mormon missionaries as possible. It might take a few decades — after we got people to stop complaining about how un-PC this idea is — to take effect, but it would ultimately deliver Africa from its ills.