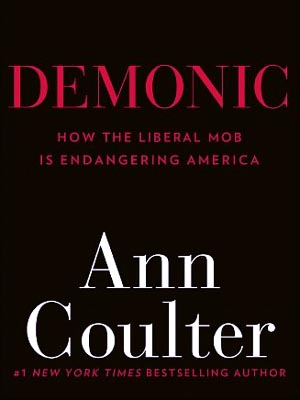 Ann Coulter pens popular books. This alone merits skepticism, because that which is popular is by nature a partial truth, with the threatening complexity removed and in its place, a passive implication that suits whatever point of view the speaker is pushing.

Her books criticism liberalism for being a neurotic mental state, which she does by attacking liberals directly and the diagnosis them as if in a mental health clinic. With Demonic, she comes closer to the assertion of Dr. Lyle Rossiter that liberalism is a (temporary) mental disease, akin to obesity, addiction, compulsive lying or other neurotic disorders.

Coulter attacks liberalism and the Democratic party as an instance of mob psychology as described by Dr. Gustave Le Bon. In her view, Democrats and other liberals pander to the mob as a means of maintaining power, and it explains why they are illogical and destructive.

This is similar to the concept on this blog of Crowdism, although in her view liberals pander to the mob mentality and are not the result of a mental slip found as a common answer to both lynch mobs and promiscuous altruism, as Crowdism is.

Coulter’s most convincing example is that of the French Revolution — the origin of modern liberalism — which is used extensively through the book, but focused on intently at its peak, as an example of the liberal mentality when given uncontrolled power. This explains her subtitle: “How the liberal mob is endangering America.” What happened to France was more than danger; it was downfall.

When they were done, the Western world’s first successful liberal revolution had dropped the country’s average IQ by ten points, destroyed its hopes of ever being a world power again, and removed all of its able administrators, guaranteeing political instability that continues to this day.

This is the demonic character of the mob that Coulter identifies: in a Nietzschean turn, she sees them not as ideologues but children having a destructive tantrum. Their mission is not to reform; that’s the justification. Their mission is to destroy.

As Le Bon described mobs about a century after the French Revolution: “[A] throng knows neither doubt nor uncertainty. Like women, it goes at once to extremes. A suspicion transforms itself as soon as announced into incontrovertible evidence. A commencement of antipathy or disapprobation which in the case of an isolated individual would not gain strength, become at once furious hatre din the case of an individual in a crowd.”

Liberals don’t like to talk about the French Revolution because it is the history of them. (99)

Coulter demonstrates her excellent research skills by revealing the more complex actualities behind several historical situations for which we know only the liberal narrative, as expressed by big media. One of her major points is that while conservatives attempt to use logical argument, liberals jump to slogans, pictures, jokes, metaphors and threats.

She debunks the revisionist history that says Ronald Reagan made a deal with the Iranians to keep the hostages until after Carter left office, way back in 1980. She also debunks other liberal darlings like Mumia Abu-Jamal, the Central Park “wilding” incident, the Kent State shooting, the “peaceful” hippies, and Martin Luther King Jr’s historical relevance and the 1960s.

However, Coulter is guilty of plenty of sidesteps. She claims Timothy McVeigh was not right-wing; while there’s some truth to that, it’s unclear how someone who sells and recommends The Turner Diaries is left-wing. She uses the terms “liberal” and “Democrat” interchangeably, inching away from the historical knowledge that the Republican and Democrat parties crossed over after the Civil War, exchanging majority points of view. She doesn’t tackle the neoconservative (liberal-leaning) parts of the Republican party.

The best part of this book is that it’s a study between two mindsets. Liberalism is an ideology; conservatism is common sense. However, a certain type of person needs liberalism to find a purpose in life, and these people tend to join up in mobs that destroy things.

But that’s not how the Central Park rape case was finally resolved. It was decided not by multicultural juries hearing both sides and carefully weighing the evidence, but in law offices and pressrooms by a remarkably undiverse group of mostly Irish and Jewish college-educated New Yorkers, who lied about the evidence in order to vindicate a mob and destroy trust in the judicial system. (243)

In some ways she is disingenuous, such as her criticism of liberals as racist and supposition that conservatism does better by it; her actual view is more nuanced, but points out that:

“Diversity” is a difficulty to be overcome, not an advantage to be sought. True, America does a better job than most at accommodating a diverse population. We also do a better job at curing cancer and containing pollution. But no one goes around mindlessly exclaiming: “Cancer is a strength!” “Pollution is our greatest asset!” – AT THE END OF THE DAY, DIVERSITY HAS JUMPED THE SHARK, HORRIFICALLY, November 18, 2009

However, this book makes its points well and instead of simply bashing liberals as stupid, uncovers a real objection to their politics: that they are acting out a mental state, not a well-intended plan. For that alone Demonic provides a good tuning of perspective for any conservative or moderate.