We Have Reached The Bezmenov Point 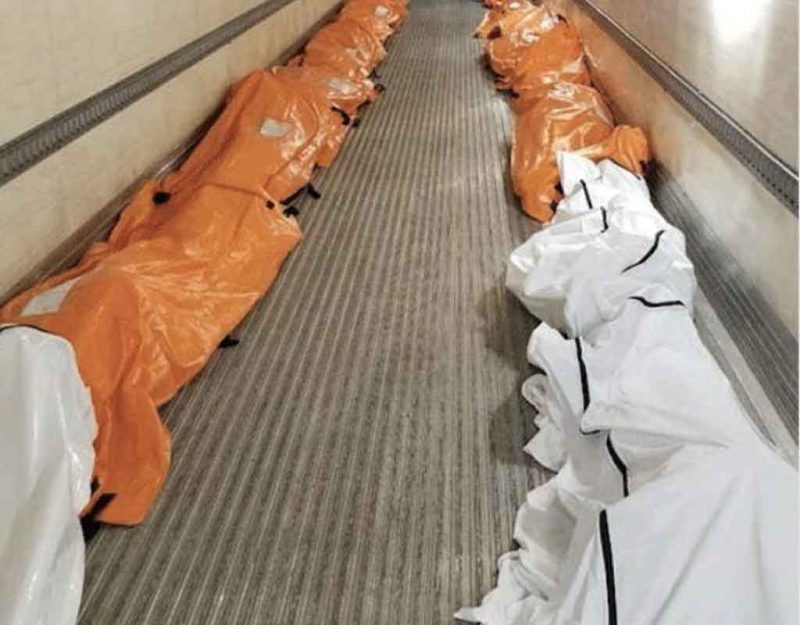 At this point, half of America thinks the virus is a non-issue and the other half thinks it is the apocalypse. The truth is probably somewhere in the middle, but not exactly in the middle like a human compromise. Most likely, it is one in a series of ugly nasty illnesses that we will face.

Before we get to that, however, we are going to have to ride out a New Great Depression where we start off with up to a quarter of our workforce unemployed and near financial collapse. Somewhere in there we have to face the grim fact that we live in two separate realities.

As of a few years ago, Right and Left separated into entirely different spaces. They had so little in common that no communication could avoid bothering one or more of the two groups, so their media fragmented. Most of the media remained Left in order to trap the moderates.

This has taken us to what we might call The Bezmenov Point:

In 1984, Bezmenov gave an interview to G. Edward Griffin from which much can be learned today. His most chilling point was that there’s a long-term plan put in play by Russia to defeat America through psychological warfare and “demoralization”. It’s a long game that takes decades to achieve but it may already be bearing fruit.

Bezmenov explained that the most striking thing about ideological subversion is that it happens in the open as a legitimate process. “You can see it with your own eyes,” he said. The American media would be able to see it, if it just focused on it.

What it basically means is: to change the perception of reality of every American to such an extent that despite of the abundance of information no one is able to come to sensible conclusions in the interest of defending themselves, their families, their community, and their country.

The first stage is called “demoralization” which takes from 15 to 20 years to achieve. According to the former KGB agent, that is the minimum number of years it takes to re-educate one generation of students that is normally exposed to the ideology of its country. In other words, the time it takes to change what the people are thinking.

The children of the 1960s, born in the 1940s, began taking over America in the 1980s, and not surprisingly, culture shifted Left during that time. The Right lost the culture war in round one because media, academia, science, and entertainment all supported the Left.

When this group of 68ers finally got their power concentrated, they took over the 1990s and made changes that compounded previous Leftist work in the 1930s and 1960s. It turns out that democracy is bad at removing laws, and so once the Left gets in a transformative law like the New Deal or Hart-Celler Act, the country becomes transformed and it seems like there is no going back.

1960s conservatives, following William F. Buckley, became “Christian libertarians” instead of tackling these problems head-on, and this led to a gradual liberalization of culture, attitudes, and behaviors. That also proves very hard to roll back.

As others have said, it is easy to destroy but hard to create. The Left specializes in destruction of good things and good people, forcing everyone else into herd conformity to compromise with the many demands of others, which always results in a mishmash of low quality. This serves the Left too.

What brought us to the Bezmenov Point was the failure of media to do anything but repeat Leftist propaganda, at which point conservatives defected, and turned out to be a larger audience than expected. This divided the nation entirely.

In order to avoid Leftist spin, Rightists went to their news sources, and those emphasized big points needed to be made against the Left, which meant that within a few years, the two news stream barely resembled each other.

This shows us where things go wrong with popular rule, which even its defenders admit is a defensive posture toward the fear of being ruled by others:

I do not think that equality is one of those things (like wisdom or happiness) which are good simply in themselves and for their own sakes. I think it is in the same class as medicine, which is good because we are ill, or clothes which are good because we are no longer innocent… Legal and economic equality are absolutely necessary remedies for the Fall, and protection against cruelty.

Often in life one finds that evading one thing leads to suffering another. That is, being afraid of something is not a direction, but the absence of direction, and this absence leads into chaos, which brings in other antagonists and problems.

We need good people in power. When we do not have them, we are ruled by the worst possible person, which is a compromise of the many views expressed by people who suffer no consequences for being wrong. If you wanted to design an inanity generator, democracy would be a perfect candidate.

This makes us helpless before more organized societies like the NSDAP or USSR. While we can defeat them on the battlefield, they can simply subvert us, with simple ideas like people deserving free stuff from government, or the need for racial equality at all costs.

C.S. Lewis, who wrote the quotation above, acknowledges to some degree that democracy is a dive into the abyss:

When equality is treated not as a medicine or a safety-gadget but as an ideal we begin to breed that stunted and envious sort of mind which hates all superiority. That mind is the special disease of democracy, as cruelty and servility are the special diseases of privileged societies. It will kill us all if it grows unchecked. The man who cannot conceive a joyful and loyal obedience on the one hand, nor an unembarrassed and noble acceptance of that obedience on the other, the man who has never even wanted to kneel or to bow, is a prosaic barbarian.

In other words, democracy and equality lead naturally to resentment, which leads directly toward socialism and when that fails, communism. Any single toe set on the road to equality will lead eventually to the final destination of all failed societies, tyranny.

I enjoy Lewis and appreciate his profundity, but I think he has bought too much into the Christian idea of “evil.” In my mind, evil means error, which in turns means something that is (1) unrealistic, (2) not geared toward the good, and (3) disorganized or purposeless.

We can see this in the mythological Satan who, appalled that God had chosen Christ over him, became enraged and ran off to… well what, exactly? “Be his own man,” or something to that effect. Disorganization arises from resentment as well.

With democracy already heading toward Communism, we fought two world wars to bring democracy to the world in the interest of ending other wars, but in the process, sowed in ourselves fatal propaganda which led directly to what Bezmenov was preaching.

For him, it was then a simple issue of pushing one side further than the other and having them alienate each other, which means that our nation would occupy itself with partisan bickering while foreign influences came in, stole the rest of what was good, subverted everything else, and seized control.

The Bezmenov Point shows us the end of liberal democracy. Even without KGB interference, we would have ended up here, and the next step after this is socialist tyranny and social collapse. Egalitarian societies always go this route, KGB or no.

It could be that COVID-19 taught us a great profundity, which is that not only is this society incapable, but it is miserable. We are where the citizens of the Soviet Union were thirty years ago: dependent on a system that they distrust and dislike, but fearful of the fall.