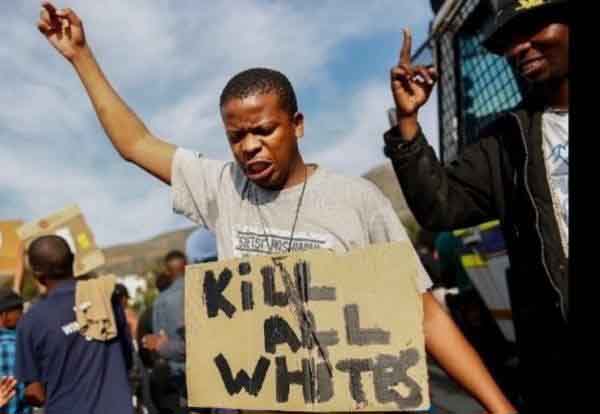 There are certain mean, evil, and backwards White People. If woke is good, these guys are comatose. Anytime they are around people other than The Caucasian Persuasion, they react as if they are an infantry squad on patrol, out past the wire in Indian Country. And can you imagine how they would react to the knee-grows that get spawned in Filthadelphia.

So how does the White Man avoid this evil curse? It helps if you have a Dad who gets sick of seeing you lay around the house and makes you go do blue collar labor during the summer. Those guys you lay rip-rap, and build two or three miles of fence with, at least half of them will be All-Amerikan Knee-Grow. That level of familiarity and camaraderie will get you past giving all black people the funny-vibe. It teaches you the difference between a reasonably nice black man and the hard-ass, undomesticated, knee-grow you’d well better be afraid of.

So what do the spoiled, rich White People who haven’t been around enough black culture to properly develop knee-grow-dar react? A recent event at a Torrance, California Starbucks suggests that The White Left just hasn’t laced up the track shoes to Race Together. This was Southern California instead of Southern Mississippi. They therefore lacked the requisite separate but equal bathroom and wouldn’t even let a brother drain the main vein and make the bladder gladder.

In video of the local incident that has gone viral, a man who identifies himself as Brandon Ward questions another man as he exits a restroom inside a Starbucks in Torrance. The other man, who appears to be white, gives his name as Weston and says coffee shop employees gave him the code to get into the bathroom â€“ before he made a purchase. Ward, a 26-year-old Carson resident, then indicates that he was denied the code because he had not made a purchase. “Is it because of my skin color?” he asks, confronting a woman who says she is the store manager.

Obviously, this a well-rehearsed political hit in the fine tradition of Homer Plessy in Plessy v. Ferguson. Brandon Ward had done his homework. He had observed this behavior* several times. He realized this particular manager made certain assumptions about black people based on either prior personal experience or stereotype; that she wouldn’t about others. He then arranged a time and date to set up a compare-and-contrast experiment and got this woman on film.

Starbucks will be in court soon and undoubtedly will be rendered “woke” with a heavy, blunt object. The next CEO better not have no cream in that coffee. They will give quite generously… to The Rev. Jackson, the Rev. Sharpton, The $PLC, The (((ACLJEW))), and if they still have a pot left to piss in, The United Negro College Fund as well.

So again, how do Red-Pilled Whites get along with blacks without either party being gratuitously and unfairly offended? They set up informal barriers. The mix sometimes, by mutual consent. They also have their spaces and traditions in which the other does not intrude. It’s nothing as crude as legally forced Jim Crow. It’s applied Freedom of Association. We separate on an amicable and mutually agreeable basis. Respect is repaid with respect. Distance is not perceived as resentment and good walls make good neighbors.

The White Left could never enter into or honor such a gentleman’s agreement. The managerial state doesn’t believe in any agreement that isn’t on paper and monitored by their legal team. There has to be something for The Central Scrutinizer to scrutinize. The White Left just can’t envision a world where the Brotherman isn’t just begging to be overcharged for sub-optimal coffee just so they can hang around deeply intellectual Leftist faggots with hideous neck beards. I mean who wouldn’t want the Good Life, Man.

* — So Cal restaurants and bars can be sticky about allowing you in the John. They do it because homeless people trash them by taking sink baths and leaving the filthy toilet paper and paper towels strewn all over the place. So I blame Gov. Jerry Brown instead of Gov. George Wallace.