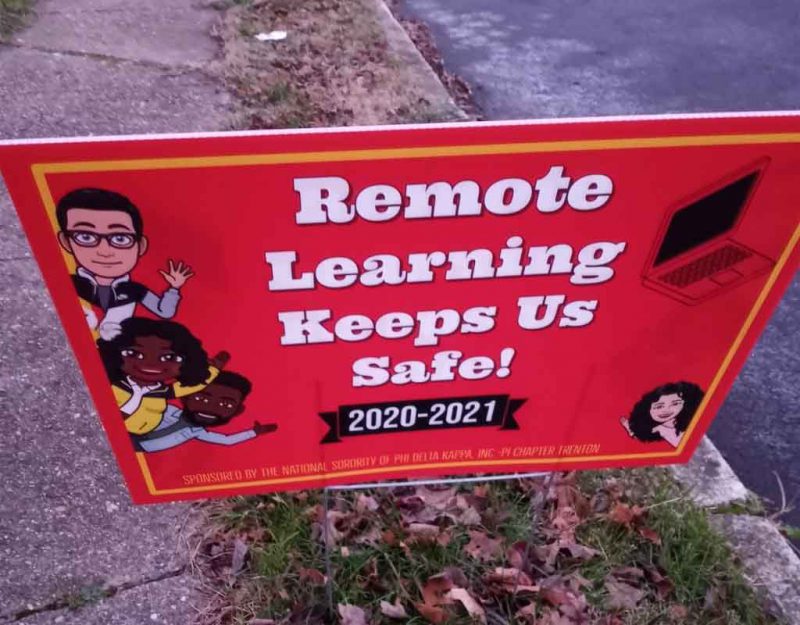 Economics classes teach people lots of things. Some of them are even true. Regrettably, some of them involve theories that sound good in a lecture hall and then don’t describe reality as it is encountered out in meat space. A lot of things that have happened with and to public education in the age of the electioneering pandemic known as COVID-19 demonstrate this an obvious degree.

In Public Education bigger isn’t better and incentives are perverse to the point where the landscape in question is littered with moral hazard the way a landfill is with stray trash. The fundamental theoretical underpinnings of most accepted economic theory have gone awry. This is the current state of public education in Amerika.

A major part of any economics curriculum is seemingly designed to brainwash people into a belief that bigger is always better. A lot of this comes from an old chestnut taught to eager young scholars during microeconomic discussions of Theory of The Firm.

[T]he theory of the firm is a microeconomic concept that states that a firm exists and make decisions to maximize profits.

A firm maximizes profits by creating a gap between revenue and costs.

This involves the concept of economies of scale.

Namely, this implies that up to the point of diminishing returns, it is always cheaper per unit to buy, ship, store, or manufacture units in bulk. The students are not told that this theory is not universally true across all economic domains. It certainly fails spectacularly with public education.

A second aspect of economic theory involves why people do anything. This involves the power of incentives.

Professional educators are leveraging moral hazard created by the desire of society in general to protect both them and the students they teach from COVID-19. They are essentially getting paid to shoot videos for remote learning classes and then correct emailed submissions. This gives them the same annual salary for about three-quarters of the work teachers normally perform in a public school setting. They do this work without the daily contact with the five or six kids that drive any teacher insane. In this context, those teachers don’t want school to reopen any more than those 5 to 6 kids that drive any teacher insane. We see the most virulent form of this in Chicago, IL.

Chicago Teachers Union members have voted to defy Chicago Public Schools’ reopening plans and continue working from home Monday because of health and safety concerns. City officials had said in recent days they would view the collective refusal of in-person work as a strike, but in response to Sunday’s vote results said they will delay the scheduled return of thousands of teachers and staff until Wednesday “to ensure we have the time needed to resolve our discussions without risking disruption to student learning.”

So what do parents who feel underserved by online education do? Well first off, they get to continue paying the same level of taxes for a vastly degraded product. Then afterwards, they come up with homebrew solutions to replace the service they are no longer receiving in return for their taxes paid. Like most correctly executed homebrews, it tastes better than the corporate schlock that is brewed by Anheuser Busch.

Students enrolled in pod-based learning, private tutoring, or private schooling that involves in-person instruction are indeed better off than those languishing in virtual education. But that’s a failure of public schools, which have largely chosen to privilege the demands of unions over the needs of children.

So what does a poor, suffering oligopoly do when embarrassed? The tide is gone out. Pace Warren Buffet, Big Public Ed is the fatso out there swimming naked. They could take the high road here and aspire to do better. They could undergo a deeply introspective process and rise to the brutal and daunting challenge of rigorous self-improvement.

Oh, wait. Here’s one thing they do instead. They’ll criminalize any option that serves the customer outside of their coercive monopoly. Barron’s plays lawn-jockey to the education bureaucracy and spreads their obnoxious propaganda below.

Families who can afford it are forming small, private groups to bring teachers or educational professionals to their homes. The problem is, sometimes the solution creates another problem. Pandemic pods are a classic example of opportunity hoarding, a concept first coined by late sociologist Charles Tilly. In recent years, I and other researchers have used it to describe the process by which a valuable resource—in this case, a tailored education setting—is made accessible to some but walled off from others. Pandemic pods, like other forms of opportunity hoarding, tend to look as if individuals are simply making the best choices for their family, when in fact their actions will quickly concretize and widen inequalities.

Let me take a deep breath and calm down before I eviscerate this barf-inducing dogfood bowl of nerd crap from the social sciences. Ahhh, there. Now on to the evisceration.

So Mom and Dad have a big problem. They scratch their heads and activate their brain cells. They think of a solution that may or may not work. They then go out of pocket (above and beyond what they pay their local teachers not to open school) and attempt an experimental school to teach Johnnie how to read.

If I’m living next door to this family, I think they’re pretty cool. They identified a problem and solved it without making me eat any negative externalities.

In some cases, families are teaming up to form “pandemic pods,” where clusters of students receive professional instruction for several hours each day. It’s a 2020 version of the one-room schoolhouse, privately funded.

I like the long term implications of my neighbors being smart people that handle their own issues. Wankers, on the other hand, refer to solving your own problems in unique and creative ways as opportunity hoarding.

We see this sort of wankerism raised to an exponential power by Alexandria City Public Schools (ACPS) Superintendent Gregory Hutchings. Hutchings went to war against evil, rich parents who started teaching pods while ACPS remained 100% virtual and maybe about 20% effective.

Hutchings fretted that in-person learning pods would cause some students to get ahead of their Zoom-based public school counterparts. “The concern I have about that is, if this is something that’s occurring for people who have the means in regards to bring in dollars and hire somebody and get their kids together, we can cause inequities,” he said. “Even though we are intending to do the right thing, it can cause some inequities if some kids can do things and others can’t.” Later during the conversation, Hutchings described pod-based learners as “privileged.” “If you’re able to put your child in a learning pod, your kids are getting ahead,” he said. “The other students don’t get that same access.”

Got it, Knee-Grow. Nobody really earned any of that money they are spending to resource those pods to do a better job of teaching than ACPS. Never mind the fact that this expenditure is above and beyond what these people are paying you and all of your minions to deliberately and advantageously fail at your assigned fvcking jobs, Knee-Grow. But no, Mister Hutchings, you have to be an even worse example of educational bureaucratic scum.

But now, Hutchings has pulled one of his kids from ACPS—which remains all-virtual, to the frustration of many parents—and instead enrolled the child in a private Catholic High School currently following a hybrid model: some distance learning, and some in-person education. “I can confirm that our family made a decision to change my daughter’s school this school year,” said Hutchings in a statement to Theogony, the student newspaper of ACPS’s T.C. Williams.

Does Alexandria City Public Schools (ACPS) Superintendent Gregory Hutchings ever leave his brothers’ behinds? I mean seriously! Isn’t he just opportunity hoarding? Let’s send Pookie and Ray-Ray to an elite, hybrid Catholic School. Are they some different color of black than the precious offspring of The Illustrious Gregory Hutchings?

You see the economic incentives here. It is perverse to the point of being perverted. Mr. Hutchings is in charge of an oligopolistic organization that has an opportunity to control the market well enough to make customers pay for a deliberately inferior product. Think of it as the relative surplus value of government’s coercive monopoly on the taxation system. Virginians are legally required to pay money to people like him and are utterly powerless to make him fully perform his job. Nice gig – if you can malignantly extract it.

Then his incentives get even worse. He has the resources on hand, extracted from his coerced pool of customers, to provide his own offspring a better product than that which he is required to provide for others. So, backed by the force of law, he can make poor children suffer his vastly ineluctable fvcktitude. He can then, using this extracted value, provide his own family with better. I’ve seen nicer heel-characters on old YouTube videos of Jerry Springer Show episodes. This man has the proximate moral depth of a coprophagic paramecium.

So, like Jerry Springer, at the conclusion of his daily TV circus; we ask the great concluding question. “What can we learn from this today?”

1) Public Schools realize diseconomies rather than economies of scale. The more kids you put in one building, the more stupid a zombie hoard of graduates you get back out.

2) Public Schools are incentivized to do as little as possible to educate this unwashed hoard. They get paid the same whether they educate or not. They are currently getting paid the same whether the children are even allowed to show up or not. It should shock nobody with an IQ around 90 that teachers in Chicago, IL feel incentivized to not have the kids ever show up again.

3) Parents with some creative ways and abundant means are incentivized to get their little darlings as far away from zombie land as possible. They so endeavor.

4) Public educators are humiliated by the fact that these parents can teach their offspring how to read without the permission of these subsidized experts. They therefore accuse the parents of Racism, Classism, and any other crap they can throw at them.

5) Public educators with enough money will get their own kids out of Public School. At the same time that they are politically lobbying to do as little for your children that they can get away with at a given salary. Behold! The power of economic incentives at work.

This is incentives and Theory of The Firm at work. In other words, an intelligent and qualified economist would accurately predict this crap. Perhaps we have a new sub-genre of the discipline of economics. It is a genre that explains the execrable behavior and dismal performance of the public education “workforce.”

Call it Springernomics. Instead of quality, in-person classroom instruction, the children of poorer families get the daytime TV freak show. And they all get taxed to pay for it, if they bother going to work and do anything useful. The educators are fortunate enough to be mostly inadequate dimwits. The implicit limits to their own survey of perception prevents them from having to ponder what the parents of struggling families are being incentivized to do to any education bureaucrat or unionist they can get their grubby hands on.