War and Democracy, by Paul Gottfried 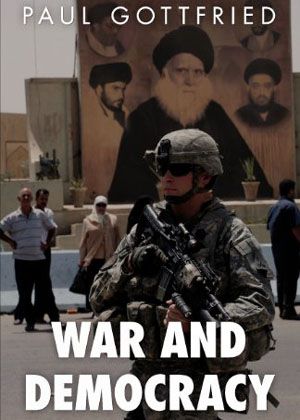 We have always been fighting the Revolution. This is the thesis, in a more complex form, of Paul Gottfried’s War and Democracy, a collection of essays centered on the instability of modern liberal democracy after the “end of history,” and how it has launched us into an unending series of wars for ideological objectives. In exploring that, Gottfried also uncovers the neurotic and confused nature of modern existence.

In doing so, he targets neoconservatism, which could be described as the greatest threat to right-wing beliefs since it incorporates surface characteristics of conservatism but mates it to a fundamentally liberal mission, namely the spreading of liberal democracy in the notion that it is “progress” and will eliminate wars, liberate people and generally bring our species to a more Utopian existence.

Gottfried picks his targets from the abundant myths and confusions of a modern time. He tackles anti-German feelings in “Germany’s War Wounds,” then picks apart the complex relationship between Jews, Israel and liberalism in two essays, and hits topics as diverse as middle east uprisings and cultural decay in between. A consistent thread runs through all of his pieces: criticism of that which, not making logical sense as a continuous thought, has been amalgamated under an aesthetic notion and tied together as Ideology.

The style of these short essays is crisp and yet curving and cynical. Gottfried attacks the insanity directly by revealing its logical contradictions and then extrudes the argument into a question of consequences. What arises from these disaster policies and broken or malformed assumptions? Perhaps this book’s most powerful psychological effect is that it always hints at a truth suspended beneath the surface of reality, and the need to look not at what’s on our desks in terms of politics, but what its presence among those in power will create.

In the ’70s and ’80s, the American left swarmed with despisers of the U.S., which was then engaged in a global struggle against the Soviets and their proxies. The Right by default became America-boosters, in whose ranks coexisted both traditional anti-Communists and neo-Jacobins. But it was the neo-Jacobins who by the end of the Cold War were able to define the moral substance of the struggle against the Soviets, as a global democratic crusade tied to a particular state representing a political creed. Unlike other nation states, neo-Jacobin America is ethnically and racially pluralistic but imagined to rest on a universally applicable proposition, that everyone should be viewed as equal and be empowered to enjoy human rights. (79)

Obviously I disagree with Gottfried on this point in that even his own history shows the origins of internationalism in the French Revolution. Liberalism gradually infiltrates by a method not described here, and when it takes over, even conservatives parrot it and use it as their justification for war. Further, our use of this creed goes back to the first world war (“the war to end all wars”) and the second world war (“the war to liberate Europe”) if not to any of the post-French Revolution European wars by which Napoleon and others tried to fight monarchy and implement equality.

Neoconservatism is a liberal disease and, while Gottfried illustrates this, I think he’s off-base regarding the blame for a single country, and by doing so, is lunging after the wrong target. However, you will not find a more eloquent or fully descriptive description of why the neoconservative crusade for global liberal democracy is a historical artifact elevated to religious status. He is even more insightful as he decimates the fundamental myths and legends of this new religion, specifically in razor-edged essays like “Wrong Revolution” and “Bourgeois Radical,” both of which have a whiff of the same type of socially critical eye that Tom Wolfe wields to great effect.

One thing Gottfried does that is unique in his field is to associate democracy with an inevitable projection into consumerism. While that might seem to contradict his thesis above, where the incorporation of liberal democracy into patriotism and capitalism under the guise of universal human rights is sui generis to the Americans, it explains more of why this “easy” belief system is so pervasive and destructive, and yet invisible to most people because of their unstated assumption that it is morally superior and progressive:

The current version of democracy benefits from consumer capitalism inasmuch as public administration needs the financial resources and consumer goods produced by the market to maintain social control. Consumer societies also serve the goal of democratic socialization — that is, the creation of “democratic,” as opposed to “authoritarian,” personalities — by encouraging a materialistic way of life. As Daniel Bell argues in The Cultural Contradictions of Capitalism, other things being equal, democratic-capitalist societies work against pre-modern institutions and values. (114)

For those of us on the New Right, Gottfried is a vivid and adamant link between criticism of liberalism and criticism of the capitalist-democratic state religion which has become the primary agent of liberalism. When the Soviet Union failed, Marxists stopped fighting directly, but used instead a divide and conquer technique based on hybridizing existing beliefs with their own, and thus promulgating their own DNA amongst that of the enemy.

If you have been wondering what ties together most dissidents from this time who, like myself and Gottfried and many others, feel the West has become Rome II and is falling in the same way, look no further than War and Democracy. If you are an alt.fan.unabomber devotee who thinks industrial society has trashed us, a paleoconservative who feels even Reagan had a bit of the Red in him, or just a modern moderate who wonders how civilization can have become so crass and meaningless, this book introduces the basics and gives you a strong push in other directions you’ll want to explore.

Socialschism | Politics and the wave-particle duality of race