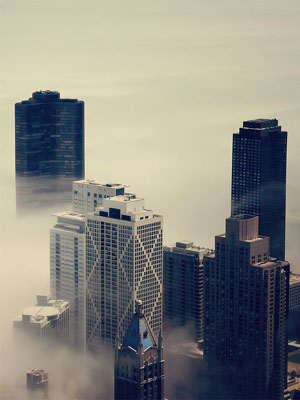 The modern time: after the fragmentation of the Roman Empire, the schism of European Christianity, the Enlightenment and then the liberal revolution of 1789.

Its defining attribute: equal validity of all people’s aspirations, or in other words, no one right way for society to act, in which people must then find a role. There is no goal. The individual does whatever he or she finds equally valid.

The result: politics itself. Since we cannot count on a common goal, and thus organizing people toward that goal, we must pander or terrify instead. The science of mass manipulation was born.

From this comes all of the disasters of the last two centuries. 1789 was only a decade from 1800, when European re-arrangement along lines of the nation-state took its modern form. Only a hundred years or so later, the world was plunged into its first apocalyptic full-scale modern war.

When you look at this event curve from the perspective of history, it’s the blink of an eye. A change was introduced as idea, and overnight it swept Europe, and then swept Europe into war. Finally in the 2010s people started to question the idea, because after all of our contortions we still can’t make it work and collected disaster looms on the horizon.

Politics emerged from the need for this mass manipulation. It was as if society made a decision to no longer lead itself as an organic entity, but to lead itself around through deference to an external authority: an ideology, an economy, a morality or even a symbol.

This was convenient, because it meant that no opinion was more valid than others. Saying “I think that’s not a good idea” is “personal” in a society of equals, but claiming that there’s no more money in the budget, the voters nixed it, or it’s against equal rights is removed enough that it operates as an impersonal justification.

Paradoxically, if you want a society dedicated toward the individual, it has to become impersonal, so that it doesn’t impinge on that individual at all.

An impersonal society however must have no purpose and as a result, all activities that humans undertake are compensatory. When your society has an ideology, you have reached the stage where it never actually changes direction. Like a contemporary office, it just adapts to the times but never changes the agenda. You just attend and carve out a space for yourself.

The result of millions of people simultaneously carving out a space for themselves is a tragedy of the commons. The modern entitlement complex comes from this sense of having no influence on any actual change, except perhaps a deepening of the ideology of society (a liberal ideology), and thus wanting to carve out more for the self. And if we’re all equal, and someone else has something, don’t I deserve it too? Actually, they’re not asking; they’re telling. They’ve been forced to go to work, obey laws, and heed the ideology. Thus they demand equal entitlement.

If one gets something, everyone in the crowd must have it. If that destroys it, oh well.

When the crowd destroys the object it covets, it cannot blame itself because that would invalidate its principle of rule. Thus it must always manufacture enemies. Having a Hitler crop up is a once-in-a-lifetime streak of good fortune. No one really thought a man outnumbered 20-to-1 had a chance. It was a business opportunity.

This affliction is not just for the middle class. Whether they are drinking away afternoons in the bodega, or jet-setting millionaires inventing new schemes to help misbegotten places, or even the gangbanger culture of the inner city or the dropout culture of hipsters, they are all compensating for a lack of real direction to their civilization or power in life.

As a result, modern life is hollow. On the surface, there are many reasons why (justifications) and ideologies (inclusion tokens for the group). There is no substance underneath however. Modernity is more than anything else a process, because in order to be pluralistic, it cannot have a goal.

The modern person is a walking corpse. On the surface, they are adorned with unique ideas and combinations of clothing, activities, beliefs, books, etc. Underneath, they are all the same — equality was a self-fulfilling prophecy — in that they have an equal level of confusion because they are missing parts of the function of civilization itself.

With every day, the anxiety spreads in overlapping waves. No one knows what to do; yet they are told what “should” be done. Like kulaks they march toward the Great Ideological Fulfillment, and yet it does not fulfill. The disconnect forces them to compensate, deep into cognitive dissonance.

Soon they know nothing but the path they are on. They are blind to other possibilities. All they know is that reward comes from ideology. They fear, so they seek enemies. They are hollow, so they fill the void with murder or consumerism. And they spread the disease. Soon all are walking corpses, staggering through a wasteland, proclaiming the victory of progress.