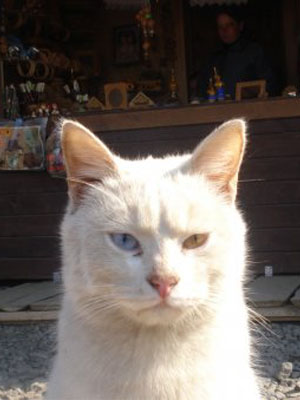 On the trails of Texas, lore had it that you could break a stampede by holding out your hand with palm facing outward, splitting the herd around it. That metaphor applies more places than you find cows.

Metaphors can be useful because we live in an age of doubt. This doubt hits us three ways: we are unsure of what is true; we are afraid to confront prevailing “wisdom”; we doubt ourselves and our ability to understand reality.

We are unsure of what is true because there is no starting point. Older societies had culture and heritage, and with that, folk wisdom. It might not always be right, but at least it’s a point of reference. In a relative universe, that may be better than a static truth. It’s a consistent rule that can be modified as needed for specifics.

We are afraid to confront prevailing wisdom because it is reinforced by three highly powerful systems: popularity, consumerism and democracy. Have you ever seen people doing “the wave” at sports events? Popularity is like this: a motion that passes through people, re-arranging them around what others think is important. Consumerism is what happens when people buy things according to whatever trend is popular. Democracy is another popularity contest, this time for political power, with the lowest common denominator coming out ahead.

We doubt ourselves because we doubt our ability to understand reality. Who are we to say modern society is wrong? It has all this technology, military power, economics… it seems unassailable. Everyone else seems to be OK with it. It’s hard or impossible to prove it’s wrong, except that it has a stench of bad logic and thus even worse results to it. But who will stand up first to oppose it?

These forms of doubt define our lives and corral us like cattle toward a series of goals that are defined by those whose job is to keep society in line. Their job is not to lead; their job is to look within, patch up problems, and generate enough positive PR statements to turn a profit. We call them “presidents” and “activists.”

Even if we do get up the gumption to express our doubt of the empire of doubt, social pressure is massive. We are surrounded by people who have a vested interest in thinking everything will turn out just fine. “I just got the mortgage paid off, thus Rome can’t fall this decade!” We meet maybe five exceptions a year, if we’re lucky.

Inevitably the process continues. The society of doubt projects its doubt onto us because it is not self-critical. Like a giant fungus, or moss, it keeps growing. It just does what it does, which is take care of itself. It is numb, oblivious and insensible to alternatives or consequences.

As a result, people waste their lives. They go to school, and spend too much time on pointless busywork trying to “get ahead” based on “hard work” and not native ability. Then they do the same at college and/or graduate school, then repeat the process in their first decade on the job. They may discover in their 40s or 50s that they have “succeeded” and thus life is materially easier. But they must keep dominance and fatten up that retirement fund, so they plow ahead.

When they finally retire, they wake up and have to figure out what their lives meant. Not surprisingly, they are bitter and vindictive — their best years went away, dedicated to serving people less competent than themselves. Their lives are wasted on the irrelevant simplistic hazing and hoop-jumping required for the pretense of the herd that we are meritocratic, egalitarian and progressive as a society.

Civilization becomes a parasite when it no longer has a goal except itself. Even the humblest of civilizations start with a goal, which is to grow. Once grown, they need new objectives and mountains to climb or they collapse inward and cannibalize themselves. Rome did it; our civilization is doing the same right now and has been for several centuries.

The good news is that it is relatively easy to reverse this process. It takes brave people to stand up and offer solid criticisms, and solid alternatives. The first people to thrust out a hand with an unyielding palm facing the stampede are the people recognized as salvation. Not at first, but soon.

While most people are incapacitated with doubt like insects stunned by the paralytic sting of a wasp or spider, there are some who have not yet allowed their personalities to be dominated. As they take on the risk of social censure and stand up to object, their numbers grow, and the decay begins to reverse itself.

Introduction to the Social and Political Thought of Julius Evola, by Paul Furlong | Walking corpse