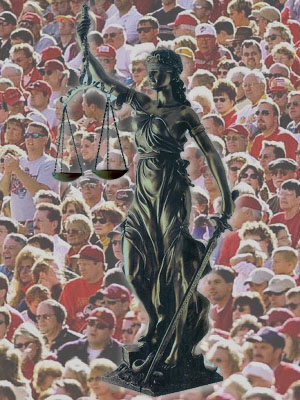 Many words on this blog have been dedicated to political abstractions, and to attacks on equality, but very rarely do these articles center on showing you what inequality would look like in daily life.

Words are tokens. If two people understand roughly the same meaning between the tokens, communication can happen. It still requires both parties to be receptive to understanding the other. For this reason, one of the first steps to defining words is to use examples to show what the terms mean.

In the case of the irritatingly vague term “inequality,” what comes to mind at first is a mathematical equation. Something on the left is not equal to something on the right. However, in real life, this term is applied to a huge group of people.

We say this group is unequal under two circumstances: (a) we have different expectations of them based on their backgrounds; and (b) they achieve unequal results in life. Somehow, these two go hand-in-hand, which allows leftists to implausibly claim that b follows from a. Reality is more complicated.

These people get to avoid following the same rules as everyone else. That’s not fair according to the calculus of the crowd.

As a result, the crowd tends to foam at the mouth at the idea of inequality. However, they still want the services that these exceptional people provide.

They want Max to suffer through the same classes as everyone else, and not get bored and drop out. They want Sarah to spend an extra two hours a day on the road going the speed limit. They want Dave to wait in line even though it will add another five hours to his 70-hour workweek.

Inequality is a fact of life. We are not equal in abilities, and by Darwinism of a mild sort, those who are better at something go to the front of the line. Cultural Marxists want to eliminate this process wherever they can, but the result will be a disaster.

First, they will disincentivize people to be exceptional. If you are exceptional, you get handed a greater burden that is also unnecessary. It’s better to use your exceptional skills to do the minimum and save the free time for yourself. Millions of high school underachievers learned this early.

Second, they will raise the less competent up to the level of the competent. This means people will soon lose the ability to tell the difference, and society will be inundated in incompetents. We will all wait longer in lines, get terrible medical care, and have mind-numbingly boring classes.

But everyone will be included and like a pointless mathematical equation, we will finally be equal.