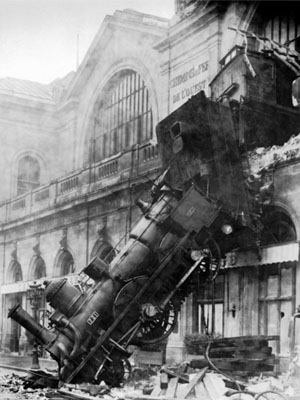 When I was little, older people seemed very divided on the topic of trains.

“Don’t much care for the kind of people you find on trains,” one would say.

“Well now, that’s not so,” another would chime in. “Maggie and I took a long trip out to California on Amtrak and it was just lovely. No troubles at all.”

“Better than a bus,” another would say. “Meet all kinds of de-tri-tus on the bus.”

The jury is still out, but it seems that trains provoke a good deal of racial tension, which is our polite word for bad feelings between different ethnic groups. “Tension” sounds less like it could explode into all-out war at any minute.

In fact, over the last year we’ve had several rather public disturbing incidents of racial antagonism on trains.

What is it about trains that brings this out in people? Is it the constant noise, the phallic shape, the symbolism of trains as an emblem of colonialism? Probably not; it’s probably much simpler. Trains and buses are our last truly public spaces.

Back in the utilitarian 1970s, we savaged our public spaces. They don’t exist now. We opened the parks, monuments, museums and commons to everyone and in order to support that, carefully dumbed down our public attractions so they would attract the attention span of a carnival-goer.

The result is that now in America, if you want to meet someone, you go to a pub, restaurant, bar or coffee shop. Those can still block out people who are drunk, criminal, deranged or simply destructive. People seem to prefer this — more dollars are spent, and more product is moved — but we lose any real “public” spaces.

Detractors will note that a public space which is limited to only some members of the public is not by definition “public,” to which others will counter that public spaces with standards are open to every person who can behave, dress and clean up in a certain way. Not a high threshold.

The end result of the death of our public spaces is that the only time we are truly forced to encounter the actual public is on buses and trains.

Most of us, especially those of us reading polysyllabic blogs on the internet, come from the suburbs or their urban equivalent, the luxury apartment/condominium. We are the middle classes, and up. We go from jobs in big buildings with lots of security, to commuting in our cars, to our secured buildings or gated communities.

Along the way, we don’t encounter the general public — unless we take a bus or train. Then it’s us and everyone else. And for the first time, we see exactly what our society is like.

What results — racist incidents — are probably less a result of racial dislike than a deep frustration with the fact that our countries no longer belong to anyone. There is no Britishness, or Americanness. There is only buying a house, working a job, and buying stuff.

That in itself is isolating. Add to it the “racial tension” that’s always just under the surface. Pile on that our distrust of our politicians. And that you’d have to be brick stupid to fail to notice the continued degeneration of public services, culture and honor among our people.

Trains bring out the worst in us because they show us our society as it really is. You cannot run away from the general public when you must share a phallic symbol of colonialism as it rattles from stop to stop. Instead, you must see what has been taken from you, and it’s no surprise that brings rage.