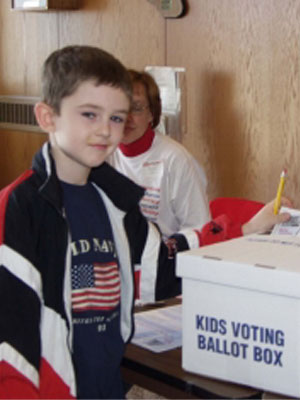 Democracy advocates don’t consider measures used to guarantee a high quality group of voters, for example those that only counted educated and informed opinions, or allowed citizens invested in the nation to control its destiny. These approaches followed the ancient principle of requiring skin in the game to prevent people from voting for their own advantage.

Though an indiscriminate mass is now considered more capable of determining wise ideas than a select group of highly successful people, it still remains possible to improve the quality of the political dialogue by pressuring it to focus on rational and purposeful topics.

The best and quickest reform for democracy would the removal of the voting age requirement so that children could participate in the election process. Exclusionary sycophants object to this, saying children are uninformed about the nuances of the political system and don’t understand long-term policy implications, but the same is true about the majority of currently permitted voters, and the removal of voting age restrictions would not upset this accepted dynamic.

Others say children would be easily manipulated to vote for policies that unrealistically promised what they could not deliver, or offered personal benefits at substantial cost to the public or at least the tax paying class. They imagine children would be effectively bribed by politicians offering rewards that other groups would have to pay for. But this tactic is already a tolerated staple of democratic politics, and today’s adults regularly vote for it.

Getting children involved with the democratic voting process would have great benefits to the political dialogue, especially in the youthful 4-9 year demographic that has not yet been inundated with political and social propaganda. A democracy that includes children will skewer unrealistic social pandering by mentioning its actual qualities, ruining the efforts of politicians and media lackeys to force compliance with fanciful utopian doctrines.

Young children are the best addition to democracy because they have not had their consciousness saturated by news media narratives. By instinct, they innocently convey the truth of what they observe without adjusting it for social expectations because they have not yet learned to lie in accordance with custom.

Children raise uncomfortable but essential questions and point out the obvious that conditioned adults are afraid to discuss. This fosters critical examination of issues that differs drastically from controlled presentations and phony debates.

If the Tea Party holding government accountable for an epidemic of fiscal irresponsibility is called terrifying, a whole generation of fresh voters that isn’t filtered, censored, or brainwashed is sure to usher in a new age of honest politics.