Unemployment and the jobless jobs

Modern day jobs are some of the worst work that humans have ever had to do in our entire history as a species.

There has never been such a pathetic excuse for a job then for humans to sit and scan items through a machine whilst repeating the script “Hello! I am very happy to help you! Would you like a plastic bag with that Sir? Thank you very much, please come again!” – That in an almost robotic, hypnotic trance.

I resent these jobs with a passion, these are the jobs of no jobs, these are the make-work jobs that are only there for convenience of higher busy-business people, who then bureaucratically piss all over the population, and a minority of those are actually intelligent.

What’s worse if you actually have a brain inside your skull, you will end up feeling empty and completely fed up by repeating this mechanized process for none other than a few peas on your plate. 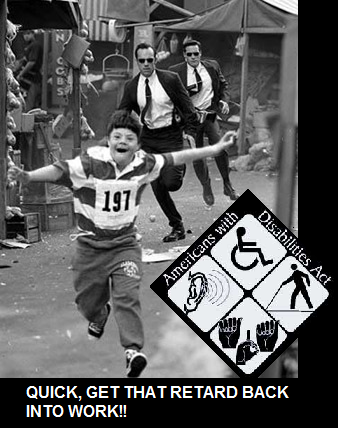 Everyone is expected to do these fake jobs, everyone, and in a humorous way, special people have to as well! The amount of make-work it needs to ensure that these retards don’t run away! They have permanent ‘care takers’ who make sure they don’t eat their own turd.

This is just one of many examples of a parasitic job that should not exist, it doesn’t create any culture nor anything, it’s propping up the fake socialism against natural reality and it makes the population ugly and even more retarded then the retards alone could be.

For anyone who feels like growing up this century, it is going to be next to impossible to find any real work, all of our real jobs went overseas, sold to cheap employment in other third world countries, all of our manufacturing, industry whatever, it’s all gone and it’s not coming back because we cannot be bothered to change our culture for the better.

The jobs we are left with then, majorly in urban areas – are not jobs at all, they require no skills nor any life in you at all except that you press buttons, get to work on time, every time and that you do not say anything that might offend the stupid fat people who continually walk past your till muttering some junk that you really couldn’t give two shits about.

If you are anything from 16-years onwards, you will be expected to work in a ‘temporary’ job selling junk at some consumer store until you ‘graduate’ and are successful about repeating the lies that liberal education teaches us, but then it turns out that whatever education you are doing won’t get you a real job in the end anyway.

IfÂ  you fail to get an ‘education’, perhaps because the ego gratification of the teachers is more important to them then actually teaching reality to their students, then you end up working on a till like everyone else – meanwhile the beetle-like proles gain their degrees and educations at this make-work establishment, they now get payed more money to make sure that the competent and the incompetent alike, all get to work equally, all cogs in a giant mindless machine.

What’s the solution then? What’s the symbol we can wave on our plastic signs angrily like an oppressed peasant at the government? Where’s the change we all hoped for? – Reality is, there is none.

There is no way, except establishing a community and getting away from the urban dumps that turn the west into third world techno ghettos; and they know this, getting away costs lots of money, so how do we make ourselves money? We get a job..

This is a cycle here, it makes this system go around – and it ends when the make-work people exceed the work people by such a critical mass that there are more people trying to enforce others into work then actually doing the work themselves, that is bureaucracy for you – lots of paper and red tape, nothing else.