When we have too little of something and there is demand for it, its value increases. The reverse is true as well. 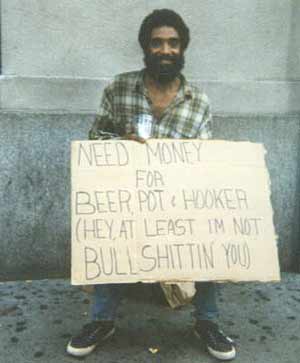 If there is way too much of something, even if demand remains, its value will plummet and the excess will languish, unutilized.

For most of us, our ethical social manchimp brains shy away from the fact that labor is something that can also accumulate to extreme excess. We understand that inert objects, which when foolishly produced in gross excess, can go to waste.

But the idea of wasted human lives is for us a different beast. Reality often hurts, so stictly in the case of our bias favoring our manchimp equals, we modify the rules we use to engage with it as if reality is going to sympathize with us.

This is irrational. A unit of labor, embodied in a human, is a component of economy, not the cause of it, not the whole of it, and not the purpose of it. It is even questionable whether as much human labor will be required in the future as we increasingly automate tasks using our technologies.

Our reasoned response is to face reality and get used to the continued devaluation of the human labor component within economies.

For 23 years, 58-year-old Cindy Paoletti of Salina, N.Y., worked in the corporate accounting division of J.P. Morgan Chase, balancing payroll accounts in an upstate office of the Wall Street bank. In December 2007, Paoletti was let go in a wave of layoffs that eventually shuttered the entire Syracuse operations center. â€œMy job went to India,â€ she sighs.

There is only so much competent ownership that can go around. Every human has not shown himself capable of entrepreneurship, industry leadership, or even business management. Relatively very few have.

This is why we have a division between the great mass of human labor and the far fewer providers of the means to work. If the human labor portion had even minimal mental compentence, it would understand its own role in the arrangement. It is not the place of labor to own and control the means of production.

Thus, the unemployed are not entitled to work. They are drawn upon as a resource pool and then discarded as required by the reality of economy as a system requiring proportional balance to function.

Too much labor is a gross imbalance between human population numbers and the means of the providers to make use of this overwhelming excess. Unemployment is a compensatory effect of an economy that requires the harmony of its components to maintain stability.

Socialism, the people’s banquet | The right needs to lay off Obama