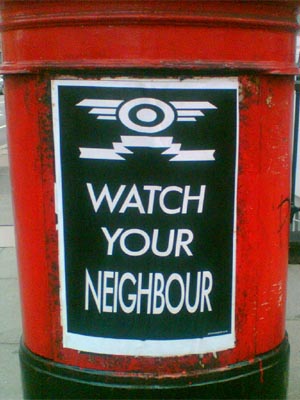 To be decentralized, a post-totalitarian state must be self-enforcing. It achieves this through social disapproval. Nothing is against the rules, except that which is not sociable. You must accept everyone and everything is equally valid, or you’re an attacker.

The primary method of social control is guilt. You are responsible for the burden of work and of being polite to insane people, so that we can all live together without any common goal. Except for our leaders; they have some kind of goal, but no one knows what it is.

Post-totalitarian age government actually does very little. It doesn’t have to. Its insane policies produce an unstable and violent society, which causes us to run to government as the solution to our problems. It compels us to work like good little dogs so we can afford to live outside the ghetto and industrial zones.

Our government does not need secret police. It has a complicit media and a vast army of socialized useful idiots who will, if rumor establishes that some person has a “wrong” opinion, conspire using guilt to force others to ostracize that person.

In order to keep the farce going, our government will use police, social workers, and even clergy to “discover” violations of the social code. Then these are releases to the public, and the crowd gets inflamed and takes its revenge. Indirect terror maintains control.

Recently, Anders Bering Breivik found a way to arm himself and execute 90 future communists. Whether or not we agree with his actions, we can see why he thought as he did. Multiculturalism, permissiveness and consumerism were ruining his native country, and he found what he thought was a solution.

However, his acts also empowered greedy legions of government employees. They now have a new Hitler or KKK to pursue, and those who find someone to blame will get promotions. In the UK, a noted writer of architectural and artistic essays found himself facing a police investigation straight out of 1984.

That writer is David Hamilton, and he has hastily answered a few questions for us. We cannot at this time verify his location; he is staying on the run to avoid being dragged into a police station without his lawyer (“solicitor” in UK English). Here are his answers.

Thanks for being with us today, David, if even only virtually. I hear you’re under the microscope, or feeling the eye of social disapproval hovering over your head like a weapon.

I rushed this because I never know if my door is going be smashed down but it covers everything. If I think of anything important I shall post it as a comment.

When did you first become aware of police attention to your activities? Have you experienced any interest from them in the past?

This was completely out of the blue. I had always thought of myself as not being particularly significant in contemporary politics. In fact I had given up writing about politics four months ago and was concentrating on Art, Architecture etc.

I was having a shower on the morning of Wednesday the 18th of January at 11.20 am when, completely unexpected, a very impatient ringing of my bell began. I then heard voices and heavy footsteps outside, a silence, then a very loud aggressive knocking on my door. I never answer threatening knocks on my door so remained silent. Then my telephone started ringing. I crept to the door and listened. I heard one go through the back door and walk around outside probably looking for signs of life inside.

Then a note was pushed through my letterbox which completely puzzled me. It read:

Could you contact D.C. (Detective Constable) Tony Gatter of the Metropolitan Police(Scotland Yard) with refer to a crime enquire(sic). Many thanks DC Gatter.

This completely mystified me. I had not been to London for 18 months and thought it must be mistaken identity

What exactly are you accused of, and how did you find out? If they accused you of no specific crime (e.g. “breaking and entering”) under what pretense did they interrogate you?

They are trying to say I had links to Anders Breivik, which is ludicrous.

I later rang D.C. Gatter on the number he left. I was very cagey to begin with. Then he fired a major volley: he said I had links to the infamous terrorist murderer of children Anders Brevik. I was stunned and exclaimed: “Good God”. He laughed. He was in control and I was flummoxed.

I straightaway said I would co-operate with their enquiries because it was such an appalling crime but I insisted I have never been in contact with Breivik. I told them I had seen the Manifesto Breivik produced.

Gatter asked: “Did he send it to you?”

I stammered: “Good Lord, no. I downloaded it.”

As a writer I download lots of information to look at later or to refer to as examples in my articles. He said he wanted to interview me and I volunteered to co-operate.

In this spirit of willing of willing co-operation I sent D.C. Gatter an email which I had from someone unknown to me signed Kenneth, who I assumed to be with Wikileaks, which simply stated: “In case you haven’t noticed, your name pops up in Breivik’s manifesto (near the end of part 2.2).”

What he meant was my name which could be someone else as my name is common. I wrote to Kenneth but he did not reply.: “KENNETH, I hadn’t noticed but will look. Thanks for telling me. Actually, it probably is someone with the same name.”

Has your home or other property been searched? Have you been tailed in public? Will you be checking your record under the UK FOIA?

I have asked my solicitor (lawyer) to make a Freedom of Information Act (FOIA) request to see what they have made up about me. Major-General Sir Frank Kitson conceived of a state tactic whereby the secret services discredit their marks by making up such things as a criminal record and having fake records inserted into the appropriate files. It is much easier now with computerisation and the Secret Services having open access to everything.

Not to my knowledge. But D.C. Gatter has tried to cause conflict between me and my solicitor.

Then the deceit and lying started.

My solicitor rang the next morning and was very upset. She had rang D.C. Gatter to arrange an interview but he was very angry with her. He told her I had agreed to be interviewed as a “witness” — that is a lie. My solicitor also told me that D.C. Gatter had refused to tell her what they want to interview me for, had refused to tell her which police station he works from and what his police number is. This indicates that D.C. Gatter is with the British political police Special Branch.

I say this in the clear knowledge of what I am saying: that was a lie. The Metropolitan Police are trying to fit me up for something I know nothing of and am no part of. This is a warning to all patriots and opponents of Muslim extremism: the police have an agenda to fit us up to make Muslim extremists look less extreme.

What do you think the goal of the police is here? Is it tied to any political agenda? Why would they act now? What does your lawyer say about your prospects?

Breivik might have liked my essays warning the Jewish community in Europe of the dangers they face from Muslim extremists, but I have never knowingly contacted him. In fact I am shunned by the extreme Zionists. The EDL leaders Tommy Robinson and Kev Carrol took me off their Facebook friends lists and the British Freedom Party refused to publish a letter from on Sir Winston Churchill’s views on race and attempt to stop immigration.

Another possibility, is that a state asset at the top of the British Freedom Party might have tried to set me up. Possibly a grudge or trying to remove opposition?

The Metropolitan police has at least 8 al-Qaeda members working for it. I have previously written about Muslim extremist training camps in Britain that are covered up by the police and media and that RAF Nimrod spy planes have picked up Taliban fighters with Birmingham accents. I made this point to D.C. Gatter but he has ignored it which makes me wonder about the motives of the Metropolitan police senior officers.

Breivik was a member of the European Counter Jihad movement but I am not. I am a self-proclaimed Conservative of the Traditional or Nationalist kind. If the Metropolitan Police are actively hounding members of the Counter Jihad it suggests that their agenda is anti-Zionist or anti-Israel. I think that this is their underlying motive. That and the intention of making Muslim extremists look less of a threat to us and the Jewish communities.

Thank you for filling us in, David. It seems the leftist governments of the West have again turned against Israel, which is a strong nationalist country, as well as turning on their own people who endorse nationalism or traditionalism. We look forward to your comments and hope you’ll not be under the microscope soon.

Educating for Virtue edited by Joseph Baldacchino | Circle of blame