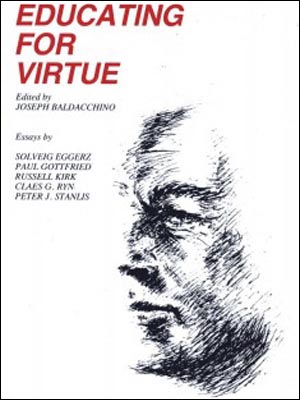 The liberal assault on a commonsense society started through its self-proclaimed outsiders: academics, hipsters, artists and criminals. It also embraced teachers, who because their jobs required education and yet paid very little, felt themselves to be exceptions to the rule.

As a result, some of the most interesting writing from the conservative right came in the form of critique of education. Many of these writers recognized the liberal takeover of education for what it was, a propaganda machine designed to crank out future liberals. However others tackled the more glaring problem, which was that non-competitive education would guarantee future social collapse.

This short book comprised of five essays, Educating For Virtue, explores the structural flaws of American education in the years after the hippies, and traces each failing to an ideological agenda of the left. The result is a witty and insightful book that provides handy ammunition when the left as they are wont to do creates a problem and then blames the un-accomodating right for the problem the left created.

[T]he forces opposed to the humanities would include…(5) ideological that our schools are the instruments for solving America’s social problems, by creating equality of condition among all students, in order to establish an egalitarian democratic society. These theories, backed by government bureaucratic authority, have reduced many inner city high schools to morally decadent centers of organized anti-intellectual chaos…Whether or not it is considered “undemocratic” to distinguish between students according to their ability and interests, it is certainly common sense to distinguish them according to their ultimate objectives in education — between those who choose not to go to college and those whose plans include college. – Peter J. Stanlis, “The Humanities in Secondary Education” (63-64)

The essays in this book tend to follow the above format: diagnose a problem, find the principle involved, and contrast it with a useful principle. In the view of these writers, the universe has an existing order and smart people adapt to it. Others invent ideology to ruin it.

Educating for Virtue begins with a powerful essay by Claes G. Ryn which defends the notion taught in literature classes a half-century ago, which was that art and culture reveal a psychological battlefield underpinning human society in which we fight for individual moral clarity.

Ryn brings his essay to a peak with an analysis of the culture war itself:

Are then not all human beings equally open to the truth? No, they are not, and this is the problem. That individuals differ in intelligence, as intelligence tests define the term, and that this may affect their ability to understand reality will not be discussed here. The point that needs to be stressed is that rationality, especially of the kind that is employed in the humanities, is not self-sufficient…For arguments to make any real difference, the individual’s imagination and character must be such that new ideas are permitted entrance into that innermost sphere of the personality where our view of reality is formed. – Claes G. Ryn, “The Humanities and Moral Reality” (18)

Through this excerpt we can see an important trait of this book: it argues from logic and common sense itself. Liberal authors feel naked without “studies” and experimental data that despite its artificial narrowness and disproportionately broad conclusions seems to support their point; the authors in this book argue from pure logic, and pure evident results. You do not need a survey to see that the quality of American education has plummeted since 1945.

Russell Kirk weighs in after that with an analysis of how literature is essential to a functioning society, and in particular how an appreciation for poetry helps us understand who we are as people, and thus how we should be governed. He attacks utilitarianism with Romanticism in this sense and shows us a vision of conservatism not as a backlash, but an enhancement of joy and human-ness in life.

After this, Paul Gottfried launches into an examination of how literature influences politics. Specifically, through Babbit and Elliot, he tracks the influence of literature on values and how those influence politics, explaining by way of absence how the left seeks to sabotage these. “We are told that the aim of Socrates in his training of the young was not to make them efficient, but to inspire in them reverence and restraint,” he quotes Babbit as writing (56) and makes this the basis of his essay.

After Gottfried comes Stanlis, who shows how teaching the humanities at university creates in those who can understand it an appreciation for the subtleties of argument. This longer essay is the cornerstone of the book and explores how a classical education motivates us to have the kind of depth our ancestors possessed, while our modern liberal tendency to create one-dimensional paper cutout political education leaves us helpless in the face of complex questions.

The book finishes with a defense of teaching history from Solveig Eggerz, who notes how the teaching of history has been edged aside by a new flotilla of political education courses. His most interesting insights occur not through the somewhat humdrum recitation of how few American students can identify the century in which the Civil War took place, but through his steady dismantling of the new liberal establishment and its excuses for erasing the past before our very eyes.

It would not be fair to compare this book to your John Grishman thriller or Malcolm Gladwell trendsetter. The material is weighty and there are no pages you can skip without missing something. However, it is not dry either; these scribes write with fire and sardonic insight, and the result is a book that teaches a good deal more than one would suspect from its page count.

Perhaps its greatest lesson comes from the Foreword, which reveals the difference between rightism and leftism in a nutshell:

If there is a single thread that runs through these essays, it is the recognition of a universal order that transcends the flux of human life and gives meaning to it…Insofar as men act in accordance with this order, they experience true happiness and are brought into community with others who are similarly motivated. But men are afflicted with contrary impulses that are destructive of universal order. When acted upon, these impulses bring suffering and a sense of meaninglessness and despair; the result is disintegration and conflict–within both the personality and society at large. – Joseph Baldacchino, “Foreword” (10)

Rightists belief in an order to the universe, and the gradual improvement of our ability to understand that order and adapt to it. To that end, rightist schooling is a practical undertaking which seeks to understand both ourselves and the world, where leftist schooling is a political and social control device. As this book points out, moving from the former to the latter has impoverished us both intellectually and morally.

Take me to your leader | Under the microscope