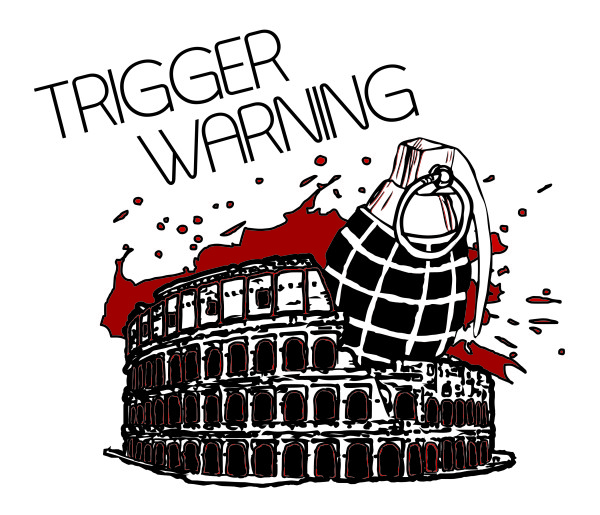 Bumbling through the internet, I came across a crowdfunding appeal for a new publication named Trigger Warning that sounds like what most of us want from the news: diverse views from different political and social orientations that lean toward hard, denied truths. In a time of invisible but pervasive disorder which will lead to civilization collapse, almost everyone is out there busy “succeeding” by finding creative new ways to parrot the denials that most people feel they must lean on. I spoke with Rachel Haywire, creator of the Trigger Warning project, to see how she and her team of creative talent hope to achieve this vision…

What will Trigger Warning do that no other publication will do?

Trigger Warning will provide a platform for those of us with unpopular viewpoints to express our ideas, adhering to a somewhat â€œtrendyâ€ aesthetic that will compete with all those popular Leftist new media sites. It will appeal to the young, hip, and â€œedgyâ€ through doing a battle/tango with the Cathedral in both design and presentation. The New Left currently has a monopoly on culture, art, and philosophy; but it doesnâ€™t have to anymore. There is no reason The New Right canâ€™t up its game.

Why are ideas being suppressed in the current time, which is more stable than the past few centuries?

I believe it is much more than a political issue here. While many people see a massive culture war between the Left and the Right, I see a greater spiritual war between the domesticated house pets and the wild animals. The ideas that are being suppressed are the ideas of the more wild types, and currently these ideas are considered to be Right. Yet it is a mere public relations tactic of suppressing unsavory behavior and culling dissent. At the moment, dissent means anything that doesnâ€™t adhere to the Leftist paradigm. I would venture to say that people on the Left are more scared of our behavior itself than our ideas. We freak them out because we are not ultra-civilized, and our ideas are merely used as a way to blacklist us. Itâ€™s a spiritual war disguised as a political battle.

Do you intend to make Trigger Warning ideologically neutral, or to give different ideologies equal air time?

I plan to give everyone air time whose ideas have been suppressed from the mainstream; as long as their writing is entertaining, provocative, and challenging. This would range from anarchists to radical conservatives to reactionaries. We are looking for intellectual and philosophical writing that has not been covered in academia or pop culture.

You seem to be part of a backlash against the dominant paradigm of our age. What awakened you to possibilities outside of the norm?

Going to a bunch of Leftist events and realizing how utterly conformist and conservative these people were. I have never been a conservative, but an individualist and a radical. I felt that the modern Left had become no different from the conservatives I used to protest. They were uppity and puritan to the extreme, not to mention boring as hell. It was only on the fringes of Right that I found the excitement and risk-taking ideas Iâ€™d been thinking about for so long. People were willing to discuss progressive and egalitarianism being a giant lie, the mechanisms of power from a realistic (yet dark by some standards) viewpoint, and the forbidden truths about human nature. I had never seen this open level of discussion on the Left before.

What do you hope will be the reaction to Trigger Warning, and what changes will that provoke in wider society and culture?

I hope that more people who are â€œin the closetâ€ about their beliefs will come forward and express themselves. There should be no reason to suppress yourself in fear of being fired or blacklisted. This goes against everything our country is supposed to stand for, and it needs to change immediately. I think our wider society is coming around due to this trend we are starting, even if the process is tediously slow. They will attempt to capitalize on our work while they cut out the uncomfortable edges, exactly like they have always done. In essence, they will change culture as a whole in order to appease us; as we are the unruly mob that they wish to consume their products. Look out for Hollywood memes speaking our language in the next few years.

Can you tell us something of yourself, and how you came to go down this path, instead of choosing a more comfortable and profitable position?

I guess Iâ€™ve always had the â€œdoes not play well with othersâ€ issue. Iâ€™m the girl who shouts out that the emperor is naked, even if pretending like the emperor is dressed will win me a prize. Itâ€™s in my nature, I suppose. Iâ€™ll never go along with something or someone to appease the group. Iâ€™m more concerned about the freedom of the individual. If these means struggling, I am willing to struggle. It would be far worse than living my life a life. Yet I am not willing to live in poverty for my position. People who are willing to speak the truth and go against the dominant current should be the people who are thriving the most in our society, not the other way around. That is true hierarchy, at least from what I understand.

Have you been getting support from people who advocate free expression, like the Libertarian organizations, ACLU, anarchists, or anyone of that nature?

Lots of Libertarians and anarchists have backed our campaign. Even some open-minded progressives. Yet not a single one of their serious organizations has been willing to cover our campaign, much less any of their journalism outlets. You are the first media publication to cover Trigger Warning. I think this shows a division between the demographic of these Libertarians and their financial desires. Their demographic craves Trigger Warning, but the people at the head of these orgs see us as a risk to their social clique and financial stability. One exception would be Attack the System, an anarchist website that has always been open to highlighting unpopular viewpoints. Another would be Comcastro, a tech podcast that recently interviewed me about the site. We’ve also gotten coverage from industrial music websites like Heathen Harvest and Brutal Resonance. I don’t expect anyone at the Cato Institute, (for example) to acknowledge our existence, unless they feel that we have somehow become a threat. We conflict with their posh neoliberal branding.

How did you and your fellow experts in Trigger Warning come together? Was there any event which inspired you to take the plunge?

Besides the fall of Western Civilization? I was sick of doing everything by myself, so I hit up Ann Sterzinger after she left Takiâ€™s. She was eager to get involved in this project, and before I knew it I was out in Chicago filming a video with her to promote the site. Once we launched our crowdfunding campaign we brought in Elizabeth Hobson and Ashton Blackwell, both fellow thought criminals who were on the more alternative culture side of things.

[Join our army.] from Trigger Warning on Vimeo.