This missile shield was not about Iran 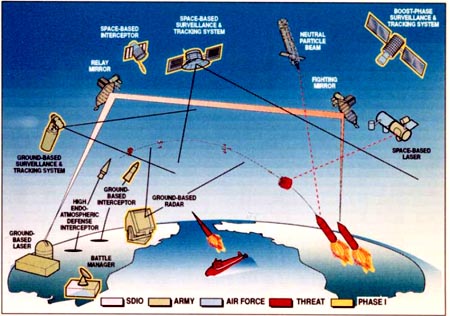 From the “most people will never figure this out, but should figure it out in order to participate in our democracy” files:

Russia will scrap a plan to deploy missiles near Poland because the U.S. no longer wants to place a missile-defense system in Eastern Europe, a Russian deputy defense minister said Saturday.

Vladimir Popovkin told Ekho Moskvy radio that Obama’s move has made the deployment of Iskander short-range missiles in the Kaliningrad region unnecessary.

Put on your average voter hat. “Wait, I thought this missile shield was to keep Iran from hitting Europe?”

Now take it off and resume having a clue: Iran’s missiles will be handled with a singular response — bombing them into glass. They don’t have the ability to retaliate.

Durrr hurrr, who does? Oh. The Russians. The same people we’ve been in a nuclear standoff with for 65 years.

And the Russians have, as they did at the end of WWII, numerical superiority in men and machines — even if they’re less slick than ours, they’re still deadly, in part because they don’t mind taking excessive casualties. “More borscht for me!”

Even more, Russians are not European — they’re Eurasian. They have a Eurasian identity. They would like to dominate both Europe and Asia, but Europe is closer. That would be a big “moving up” in the world from being a failed state with a 1300+ year history of being a failed state, to being king of the known world.

So the two traded roles, America and Russia. Russia was afraid of the Japanese after getting her ass handed to her when she skirmished with the Empire of the Chrysanthemum over Sakhalin Island. So the Americans took on the role the Russians feared, and the Russians exhausted Hitler’s armies in Europe so England the USA didn’t have to; England because she had just gotten her ass handed to her at Normandy, and the USA because she was fighting a two-front war.

After WWII, both sides realized they had superpower potential and a Cold War was immediately born. In the decadent West, the people were tired of war and just wanted to watch TV, so didn’t support a drive into Russia to end conflict for the next 65 years. This is your “greatest generation” — if you can use that term without laughing — the people who left you a ticking nuclear time bomb, since it was pretty clear since 1942 that a nuclear weapon was going to be developed and all power players would have one.

And that war was pretty much a problem until some guy named Ronald Reagan figured out a simple pragma: if we let our economy run loose with growth, we can outperform the Russians with technology, driving them into an arms race that will wreck their food production infrastructure and cripple their country. Brilliant like a cudgel, but it works. As of 1991, the former Soviet states were in ruin.

Again, the Americans could have done what was inconvenient and invaded, dominating the threat of the last fifty years and saving Europe from facing a constant threat of tanks rolling through the Fulda Gap, bringing a rape wave of Soviet troops. But that was politically inconvenient for Bill Clinton, so instead he concentrated on bombing Somali and Serbian dissidents. That was easier for the children of the “greatest generation,” who were just as selfish as their parents but even less competent.

A big part of Reagan’s method of crippling the Soviets was to deny them the easy step into superpower status that having a nuclear weapon and bombers provided. The Strategic Defensive Initiative, or SDI, was his way of crippling their nuclear power. This had two effects: first, it drove the Soviets into the ground trying to compensate; second, it guaranteed that if there was a US-Soviet ground war, and the US began winning, the nuclear option would not be a sensible move for non-suicidal Soviets.

Fundamentally, President Reagan supported three core principles regarding missile defense that would be relevant beyond the Cold War. These same principles motivated President Bush’s December 13, 2001, decision to withdraw from the 1972 Anti-Ballistic Missile (ABM) Treaty with the former Soviet Union, which prohibited the deployment of any effective missile defense system, and they continue to serve as the foundation for the ongoing effort to field ever more capable missile defense systems, albeit in fits and starts:

Principle #1: Refuse to accept U.S. vulnerability. President Reagan refused to accept the notion that vulnerability to attack represented a superior moral and strategic position for the United States. His rejection of vulnerability can be traced back to a 1979 visit to the North American Aerospace Defense Command (NORAD) in Colorado Springs, Colorado. During a briefing on what would happen if the Soviet Union launched a missile attack, he learned that NORAD would detect and track the missiles but would not be able to take any defensive measures.[5] If the notion of the inherent stability in vulnerability was a dubious concept during the Cold War, where the U.S. contended with a single hostile superpower, it makes no sense in today’s multi-polar (multi-player) strategic setting. Multilateralizing the policy of vulnerability is both destabilizing and counterproductive because the policy lacks flexibility in the multi-polar setting.[6]

Principle #2: Operate from a position of strength. President Reagan firmly believed that in order to be effective in achieving its national security and foreign policy goals, the U.S. had to operate from a position of strength.[7] What was an applicable principle during the Cold War remains so today. As then, there is enormous leverage that accrues to the U.S. if it has the means to defeat the purpose of any attack. Further, defeating the purpose of an attack does necessarily mean having a perfect defense. In fact, U.S. policymakers across the ideological spectrum are recognizing that defensive measures are the principal option when faced with the threat of suicide bombers.

Principle #3: Recognize that the U.S. will never be secure if its enemies are able to use space as an avenue for attack. President Reagan recognized that America’s ability to control space militarily was of paramount importance to its security. This is why SDI focused on space-based options for defense, as recommended in the High Frontier study. The pursuit of the Brilliant Pebbles space-based interceptor was the most promising of these technological options.[8] Today, more and more nations are obtaining access to space and thereby a new avenue for potentially attacking the U.S. and its vital interests. The proliferation of space-launch vehicles and ballistic missiles are at the heart of this trend.[9] Unfortunately, the enduring principle behind President Reagan’s SDI program is not receiving due consideration. The Brilliant Pebbles program was cancelled by President Bill Clinton in 1993 and remains dormant. The ability of the U.S. to defend its vital interests in and through space will only grow more important with the passage of time.

Conservative leaders have a tendency to promote programs like SDI because they know that, while it’s unpopular to say this, not every country is friendly to us. In fact, if you’re a superpower, everyone else wants you to fall, because everyone secretly hates a leader — they want to take the top monkey’s place in the group.

In terms of the Cold War conflict with the Soviets, a successful defense system would destroy the Soviet ability to make a first strike, which in turn would undermine the USSR’s ability to pose a threat to the United States at all. So success in this area, supporters of SDI argued, could potentially also bring an end to the Cold War.

Liberal leaders, like Bill Clinton and Barack Obama, want to preserve social good feelings. They are not consequentialists, but people who want everyone to “feel” good and so they are committed only to popular acts. Recognizing an ongoing war with a feral enemy is not part of that plan.

So while Barack Obama just canceled your missile shield, and you’re getting told by ten thousand talking heads that you’ve avoided one more step toward war, you’re getting fooled and tooled by the PR machine. What you’ve really done is insured that the inevitable conflict will be less likely decided in your favor, and that if it does happen, it will escalate into “really, really bad” very quickly.