Folk wisdom and our witless scientists

Eating watermelon has a similar effect on the body to Viagra, according to researchers in the US.

It’s down to a chemical called citrulline which is found in the juicy fruit. It helps relax the blood vessels which means blood gets around the body more easily. 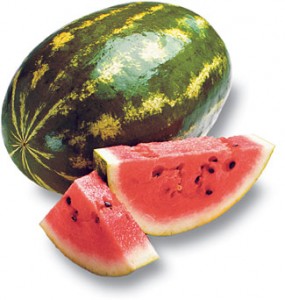 Again, “science” — in reality, an industry that employs hundreds of thousands of people, each trying to make a name for him or herself by “discovering” something others want to know about — has stumbled across an old folk wisdom.

In the Southern part of the United States, pickled watermelon rinds have been a favorite snack for years, but are also known as a folk remedy for underperforming dongs.

More citrulline â€” about 60 percent â€” is found in watermelon rind than in the flesh, Patil said, but that can vary.

Maybe we will someday learn to compile our knowledge, and stop making “science” so official (because it brings us our sainted technology) that it overrides all other forms of knowledge.

Either that or we can keep learning, one factoid-pegged article at a time.

This missile shield was not about Iran | Oblivious to history