The World Will Not Be Destroyed By Fire Nor Flood, But By Silence 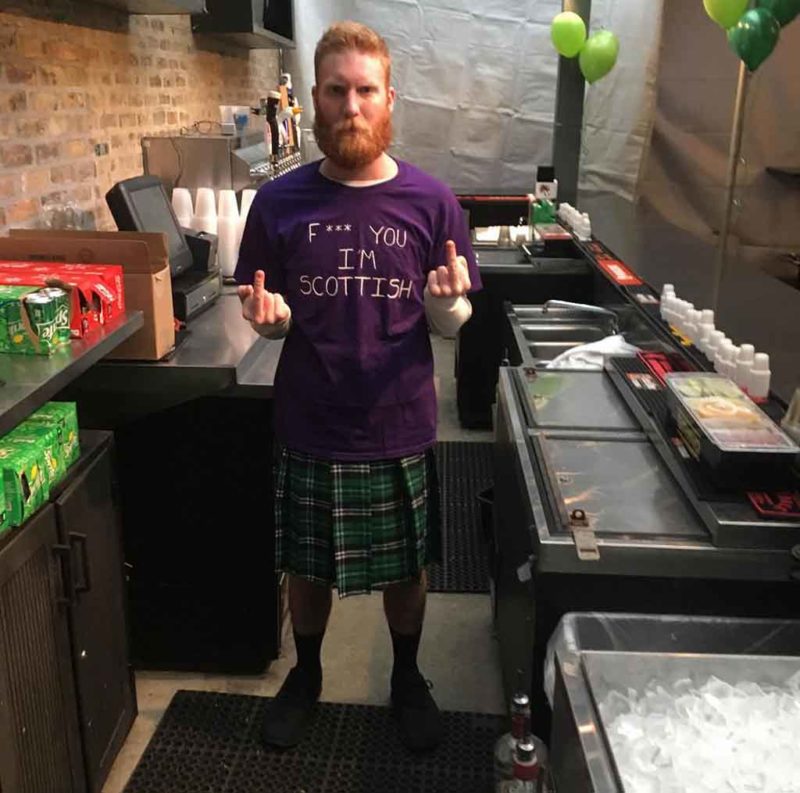 Count Dankula, a Scottish comedian whose real name is Mark Meechan, has been convicted of violating a hate speech law after he posted a video to YouTube in which he taught his girlfriendâ€™s pug Buddha to do the roman salute when he said â€œgas the Jews.â€ His trial was delayed several times over the past year and he has had a raised profile among political YouTube and Alt Right/Alt Media crowd since he stood up for Millennial Woes after he was doxed and forced to flee the country. He has also recently had his cause championed by the right as many in the movement saw this as a canary in the coal mine for crackdowns on speech regarding the Establishment and their Globalist leash holders.

Last week Martin Sellner and Brittany Pettibone, the leader of Generation Identity Austria and his writer/YouTuber girlfriend, were detained from entering the United Kingdom to give a speech on free speech at Speakerâ€™s Corner, a place that has hosted everyone from Lenin and Marx to modern Muslims intend on the conquest of Britain and the Islamization of Europe. Shortly thereafter, the UK prohibited YouTuber Lauren Southern from entering the country on grounds that she was a possible terrorist. No really, the country that has a Muslim rape and grooming gang problem, is worried about a twenty-something girl with a camera and Final Cut Pro.

I have this disgusting scene in my head of British political leaders from the Conservatives and Labour being forced to allow â€œmigrantsâ€ into their country by Their Fellow White People. The British (and other European governments) must know it is wrong on a moral level. They are corrupt and craven, not stupid or illiterate. They understand on some basic level that migration is invasion and invasion is war. The Normans spent a century colonizing Britain before William the Conqueror arrived. It was only through the slow gradual build up of a base in a country that an invading power could hope to maintain an occupation and eventual demographic replacement. Had Germans moved into Russia by the tens of millions maybe Operation Barbarossa would have been less bloody, but more successful (which is to say, more genocidal).

Many on the right have criticized people such as Sellner, Pettibone, Southern especially, as well as others associated with the alt-lite, for being shills, sell outs, controlled opposition, or being too mild and meek to address (((the root problem))). And yet those same people seem to forget that in Europe much of what needs to be addressed will land the speaker in prison. Their positions are as far as one can reasonably go in much of Europe. Shows of ethnic pride are now considered hate crimes. It is as a predator striking at the foot instead of the throat, knowing that to kill itâ€™s victim it must first cripple it. And crippled we have become.

Some on the right have criticized freedom of speech as a con designed to undermine Christianity and Christian civilization. Perhaps it was originally that, but were not Christians also champions of freedom of thought and speech and faith while under Pagan Rome? They were. Indeed, they were. Their claim was that one cannot choose to encounter Christ, Christ manifests to the man and changes his life by making him a new man. Thus, to persecute a manâ€™s faith in Christ is to persecute the essence of the man himself. Free speech therefore was a Christian virtue, just as pacifism was a virtue, right up until Christians took over the Roman military (the Greek east remained pacifist unlike the Latin west).

There has been a lot of tension on the Right over the past year concerning who is what. It must be remembered though, that many of the people criticized are not our enemies, they are simply people playing a different role in the movement. They are a guiding light pointing on to deeper and more robust, more realistic (in the historical and scientific sense) ideologies. How far their listeners choose to take the journey we cannot control. We can only ask to be platformed to make our case before the world. The less explicit and more moderate, more â€œliberalâ€ members of the movement can serve a great purpose there. They have broken the real right out of the internet echo chamber and have platformed us in a way that did not seem possible in the months after Charlottesville. To many (myself included) the brand of Alt Right seemed to be dying of bad PR.

Then came Internet Bloodsports and our sense of humor was paired with intellectual rigor as one after one, opponents of our ideas fell before us. We were rehabilitated as the YouTube Skeptic™ community made fools of themselves and discredited their horseshoe theory on issues of race, nationalism, and traditionalism. The Kilroy free speech scandal under Based Mama (who has a very high IQ), the pathological dishonesty of Kraut and Tea, and Carl of Wikipedia (aka Sargon of Akkad) gave proof that he has Dunning-Kruger as well as a lack of self-awareness culminating in his own political movement called the Liberalists. People like Count Dankula have been instrumental in helping the right find a place in the dying political spheres of the Conservative movements in Europe and America.

Free speech is an instrumental part of the ability to spread controversial ideas. It encapsulates not just the right of the individual to express his ideas but the right of the people to hear what is being said. That is a belief cuts to the heart of the nature of man. We are a creature of choice, even if that is a limited set of choices, and we need to have the right to hear views on history, science, philosophy and theology which we did not ourselves come up with. That is the nature of Faustian man. That is the nature of the European people. Our tradition is one of expansion and exploration. The seas, the skies, the stars, and now the mind have been explored primarily by Europeans. It is in our nature to question and explore, and therefore it is in our nature to speak and listen.

If we believe in the Western Values™ and The West™ that all seem to agree is the best without agreeing fully on what it is, then we must acknowledge that The West™ isnâ€™t a place or a faith. It is a people, and from the people that colonized Europe and created the European diaspora, the ideas of The West™ came. To preserve our values we must preserve our right to preserve ourselves as we are the origin of our values, not our land or our historical faith. That requires that we all have the right to speak, though only a few of us will take the risk publicly at this time, they must have the right and the courage to do it. I admire people like Sellner, Pettibone, and Dankula. Though they might not share all of my views, they have the courage to risk much more than most of us will.

Do not mistake Count Dankula for one of us, yet. And many of the people being subject to censorship from the government and big tech, are not explicitly Identitarian, but they are willing to talk with us and that itself is a giant virtue in my eyes. When Styxhexenhammer666 speaks with our side he brings his audience and is honest and open minded and willing to consider his own position. They share our values in some ways, but those values are significant. They see the leaves but have not yet seen the roots. We need to defend them as they are our allies, and bring those to our side who are ready, while standing as a bulwark for those who disagree with us, and who will never be able to agree with us do to the terms of modernity. That disagreement is fundamentally Greco-Roman, Nordic and Germanic. And so is the defense of our fellow Europeans with whom we sometimes disagree.

Now if youâ€™ll excuse me, sovereign entity Adam Kokesh is going full sperg on The Baked Alaska Experience vs. Richard Spencer right now. Early quote from Spencer, â€œLibertarians have the right to date holograms and I donâ€™t want to take that away from them.â€ This should be a fun. Â #FreeDankula