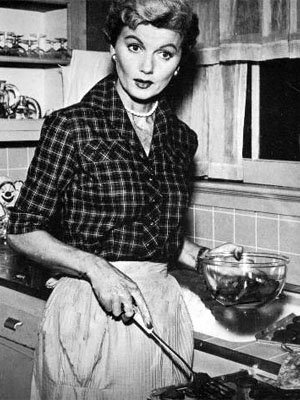 Urbanites and newer suburbanites view parenting as something to plug into an existing lifestyle. In the outer suburbs and rural areas, parenthood is seen as a life-affirming event: individualism taking a back seat to the family entity.

Urban types are intimidated by this strange idea of sacrificing the luxury car, apartment straight out of HGTV, and 60 hour per week McJob for a simpler lifestyle. Even as parents, moderns sometimes treat the child itself as a status symbol, something the more traditional crowd views as equally strange.

It’s intimidating for people who live in an individualistic society to imagine giving up luxury and comfort for the good of anythingÂ other than the self.

Two examples of parenting in the modern world:

These are dramatized, but the fact is, people hear tales of educated women staying home to care for children and being content with that choiceÂ yet can’t get past the image of a June Cleaver sewing circle. And religion? Don’t even go there, psycho!

The modern woman does not have to play the ’50s TV mom to be successful. Staying home and being a mother is now a choice. Wasn’t thatÂ what the hippies wanted?Â  But if they make the wrong (read: conservative) choice, the crowd nervously looks to each other for support.

Wait… you mean, she chose to not be a bag of cash for advertisers, a mortgage company, the car dealership, and the local salon…? I don’t get it? What is better than having money in your pocket to spend on stuff?

A biological nugget we can’t avoid:Â The idea of motherhood can’t be replaced with her economic utility in a job,Â no matter how much TV we watch, how many video games we play, or how many women fight in wars.

With increased urbanization and subdividing, the urban mentality creeps outward like a confident snake oil salesman or a villain in a Stephen King novel. Don’t you want the shiny products, the cruises where nanny comes along so you can drink and play golf, the house with the cathedral ceilings?

Those things are nice until your teenager figures out the ruse: you’ve been hiding from a rich and meaningful family experience so you can live in a climate-controlled palace, which feels more like a tomb, since all people do inside is sleep.

The budget bomb that will bankrupt the USA | Ducking the meme