The unlearned lessons of 9/11 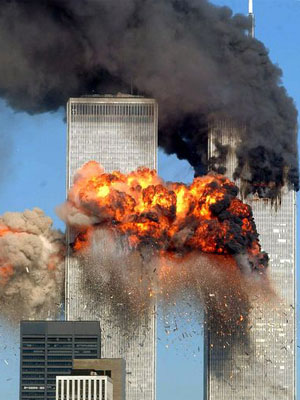 Let me start by saying I think George W. Bush is a computer.

Computers have hardware, software and data. Hardware is the chips and circuits; software is the instructions given to it; and data is what those other two operate on to make a finished product through a process of calculation.

But what about if any one of these fails? If hardware fails, the machine dies; if software fails, it crashes. If the data is junk, remember the old computer science acronymy GIGO — “garbage in, garbage out.” You get a result but it is wrong. So wrong it can be toxic.

Bush was programmed with the rotten lies of several centuries of people not wanting to deal with a problem. That problem was inequality, or rather, the inherent difference between human beings. We aren’t all the same. If we’re brave, we admit Darwin works on us to this day, and that the better need to rise above the rest.

In the Western world during its decline, our solution to inequality has been to return to our superstitious witch-doctor days and proclaim that inequality doesn’t exist. Thus, anything which demonstrates inequality is bad. We use whoever brought it up as a scapegoat, and project onto them the problems we can’t face.

When those dastardly Muslim Arabs flew planes into the World Trade Center, in one of history’s most audacious and successful surprise attacks, George W. Bush reacted as his programming taught him. He looked at the data, ran it through the programming he’d received through childhood, and came up with — per his intelligence — an optimal solution given that programming.

The only problem is that the data was wrong. GIGO. Thus while we counteracted 9/11 successfully, we didn’t learn the lessons of 9/11. The hijackers of 9/11 could have told us those lessons. If they’d been asked, they would have said something like, “We don’t like your global order. We’re not all the same. And we don’t want your norms.”

Inconveniently, those words point out the illusion of tolerance. Tolerance is in fact a form of norming, in which we tell people that everything’s OK and we make allowances for them (a process called relativism), but those allowances are tailored to guide them toward our way of doing things.

As it turns out, our way of doing this is simple: take over the world.

However, we don’t want to fight. That’s expensive and risky. Thus instead, we use pure commerce. We take over the world by giving you things and making profit off of them. To keep you from realizing that you’re being taken over by globalism, we invent a form of globalism called “multiculturalism” where we mix everyone together into a happy universal melting pot.

But in the end, see, we still take over. Our economic system merges with yours. While you can come here, we can go there. And our elites rule over your elites. It’s like the Roman Empire, without the honesty, guts, courage, integrity or foresight.

Those 9/11 terrorists were not fooled by multiculturalism. They saw that while globalism meant that the USA would be welcoming to Muslim Arabs and every other ethnic group, it also meant that the USA would then export its commercial culture to those places. Afghanistan would be overrun by McDonald’s, Coca-Cola, pornography, Goldman Sachs, Wal-Mart, CNN and even twee hipster B.S. like alternative rock.

The secret within globalism is that it’s cultural imperialism, only by the culture of non-culture. In commerce-land, everything is permissible and nothing is wrong, except to speak out against what commerce requires. Commerce needs everyone to be equal so that no idea, no matter how stupid, can be criticized if it’s profitable.

Imagine looking at your native land. Happy families, orderly life, people have faith in something and are glad to be part of what they are. The in comes roaring the empire of death. Now the families are shattered, life is chaotic and torn apart by commercial competition, and people have faith in nothing except that they want to be on reality TV.

That’s enough to make you give your life by flying planes into landmarks of this culture.

The terrorists got one thing wrong, however. This culture isn’t American, and anyone who claims it is has not thought the situation through (they’re the same people, generally, who blame Jews and African-Americans for the ills of the white races).

This culture is commerce, and it arises from liberalism, which itself arises from the manic ego of the underconfident individual which demands all behavior be tolerated. Out of fear of criticism or failure, people create a kind of commercial anarchy that then destroys their society. After that, it goes international.

Osama bin Laden and friends tried to tell us something even they couldn’t quite articulate, and this is it: multiculturalism doesn’t work because it cannot work. Globalism cannot work. These are human social constructs that we as individuals like because they afford us freedom.

However, freedom is itself an illusion. We can proclaim ourselves free, but we aren’t free from consequences. We can free ourselves from awareness of them, but all that means is that we live in denial and have ugly wake-ups as we realize we have murdered everything good for a pipe dream that only an advertiser could love.

This is not to disparage the 9/11 victims, or to praise the jihadists. They are our enemies and we must destroy them. That is the order of nature, too. But in this case, our enemies have one aspect of Truth and Reality on their side. It’s that multiculturalism is toxic, not just for us, but for the whole of humanity.

Maybe as time goes on, we’ll finally learn, and the sacrifices of the last half-dozen wars will not be in vain.

What it is | Not my problem